Le Sueur County anglers are well aware of the Jefferson Chain of Lakes. The system consists of West, Middle, and East Jefferson lakes, along with German Lake, and they collectively provide local anglers with some of the area’s better fishing opportunities. 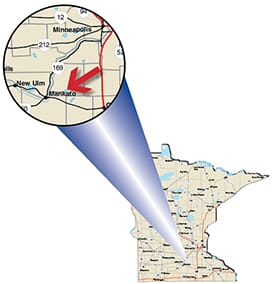 Fish have the ability to move between these lakes, so what you find in one, you’ll find in the others. More times than not, that means chasing panfish and bass, especially on its easternmost basin, German Lake.

There’s a long history of consistent bluegill and crappie fishing on 899-acre German. It’s maintained consistent numbers of respectable panfish over the years and that trend looks to be continuing.

“It’s just a consistent panfish producer year after year, and it’s a good year-round panfish fishery,” said Sky Wigen, DNR Fisheries specialist in Waterville. “These are high-quality fish, too. There really isn’t much more you could ask for in a panfish lake.”

Trap nets averaged more than 40 bluegills and 18 crappies per set. If that many panfish are showing up during a standard summer survey, there’s no question German’s panfish population is in fine shape.

Crappies ranged in size from 4 to 13 inches, with a nice group of fish right around 10 inches long. Bluegills just over 9 inches were sampled, and 20% were longer than 8 inches in length.

“Bluegills averaged 7 inches in that survey with some bigger fish included, which is typical for our better bluegill lakes in the area,” Wigen said. “There are good numbers of crappies coming up, and there’s good size potential. Everything points toward good (panfish) fishing to continue.”

While German’s panfish might be its primary draw, the largemouth bass-fishing opportunity shouldn’t be overlooked, either.

DNR electrofishing work last year produced about 30 fish per hour. That’s not a huge number, and it’s likely not a fair representation of the bass population, at least based on angler reports.

“The entire Jefferson chain has a solid reputation for producing bass, and German is right up there,” said Nate Greene, owner of Corner Bait in nearby Madison Lake. “There are beautiful bass in German and good numbers, too. I caught one just over 6 pounds last year.”

The lake’s northern pike population isn’t overly abundant. Gill nets averaged five pike per set in 2021, which is where Wigen likes to see it, and their size structure looks good.

Pike up to 36 inches were sampled, and they averaged 25 inches in length.

Just nine walleyes were sampled during the 2021 survey, which, unfortunately, seems to be a trend. Walleye numbers have been low in the past four surveys of German, despite consistent fry stocking during odd-numbered years.

Those stocked fish have shown little return, and Wigen says the lake will start being stocked annually with Lower Mississippi-strain walleyes, which have done well in other lakes in the region.

“We’ve struggled with walleyes out there, and catch rates have always been low,” he said. “We’re hoping that Lower Mississippi strain takes better.”

German also holds some fish species you don’t find in most lakes. They provide some bonus catches for anglers.

Freshwater drum are abundant, the recent survey produced decent numbers of perch over 9 inches, it holds trophy-caliber white bass, and there are enough longnose gar to target them as well.