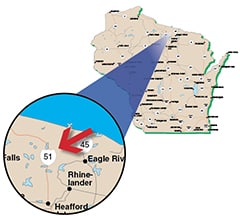 Vilas County’s Plum Lake, near the small town of Sayner, is well known for not only its walleye and muskie fishing, but also its aesthetics.

Plum Lake is a stained water drainage lake with sand, rock and muck substrates. The lake has a surface area of 1,057 acres, 14.5 miles of shoreline, and a maximum depth of 57 feet. Plum Lake’s walleye population is sustained through natural reproduction, while the muskellunge population is maintained through stocking.

During five days of walleye-targeted fyke (trap) netting in shoreline areas, 532 adult walleyes were captured and “marked” with a fin clip. Crews then followed those netting efforts by sampling for more fish by using electro-fishing boats at night to capture 222 adult walleyes. During electro-fishing efforts, 18% (39 of 222) of walleyes bore the fin clip applied during the fyke netting work. Based on those results, Plum Lake was estimated to contain 2,710 adult walleyes, or 2.6 per acre.

An estimated 68% of adult walleyes were 15 inches or longer. The largest walleye was a 26.7-inch female. The bulk of the surveyed walleyes ranged in length from 13 to 19 inches. The two most abundant sizes in 2021 were 14- and 17-inch walleyes.

However, the crew handled 12 adult muskies and one juvenile fish. Of the adult muskies, 17% (two of the 12) were 40 inches or longer, with the largest fish being a 44.3-inch female. The crew also handled a 43-incher, as well as a 37- and 38-incher. The rest of the fish were less than 37 inches. Adult muskies are considered to be those that are “sexable,” meaning their sex can be easily determined by a visual examination, or those of unknown sex that are longer than 30 inches.

If Plum Lake has a history of being known for producing trophy walleyes and muskies, it should also be known more recently for producing hefty smallmouth bass. The survey didn’t turn up as many big bass as might be expected for Plum’s reputation over the last 15 years of growing big bronzebacks, but anyone adding the anecdotal information available locally to the DNR crew’s survey work would not hesitate to fish Plum for smallmouths.

The crew captured 124 smallies in one night of shocking, with all but two of those fish being considered adult fish at 8 inches or longer. Of those 124 fish, 73% measured 14 inches or longer. The largest smallmouth measured 21.7 inches. The prize for the biggest size class in that survey went to Plum Lake’s 18-inch smallmouths that easily doubled all other lengths but for the 19-inchers. The latter group was about two-thirds the size of the 18-inch group.

During the June 3 electro-fishing survey, adult smallmouth bass were caught at a moderate rate of 6.7 fish per mile of shoreline.

Plum Lake’s largemouth bass population doesn’t quite match up to the lake’s smallies in terms of size or numbers. The same June 3 night of electrofishing captured just 45 largemouth bass, all but one of which were considered adult fish that were 8 inches or longer. Of that sample, 84% were 14 inches or longer, with the largest fish measuring 19.2 inches. Overall, the largemouths just didn’t show the same size as the smallmouth bass. The largemouths were caught at a low rate of 1.8 per mile of shoreline. The biggest contingent size-wise were the 14-inchers.

Plum Lake also has a reputation of producing good numbers of small northern pike and that story hasn’t changed much, based on the results of last spring’s survey. The crew caught 145 adults, and five of those fish (3%) were greater than 26 inches.

Now, the biggest pike did tape at 32.4 inches, but that was the only fish handled that was longer than 29 inches. The two biggest size groups were the 18- and 19-inchers, although the 21- and 22-inchers weren’t too far behind.

The netting and electrofishing efforts accounted for 14 species of fish in all, including black crappies, bluegills and yellow perch the most catches in the fyke nets.