LaDue not a bad spot for walleyes or bass

Burton Lake, Ohio — LaDue Reservoir is part of the Cuyahoga River watershed and is an often overlooked angling option for walleyes in northeast Ohio. 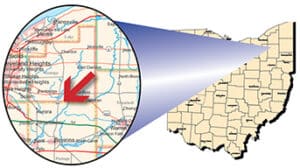 The 1,478-acre lake lies in the village of Burton Lake in Geauga County, about a 40-minute drive from downtown Cleveland. The city of Akron actually owns the lake for its water supply system, with fish management handled by the ODNR Division of Wildlife.

LaDue is well known for having a lot of lake level fluctuation since it is a water supply reservoir, which also means that only boats with electric motors are allowed.

“Especially in a dry summer, you’ll see LaDue’s (water levels) go down much earlier in the late summer, early fall,” said Curt Wagner, fish management supervisor for the Division of Wildlife in Akron. “That often makes the State Route 44 ramp fairly unusable. There’s two main launches, the State Route 44 upstream and then there’s the Washington Street ramp north of the causeway on the west shore.”

Since the lake is relatively close to Cleveland and Akron, it gets a lot of paddling pressure, said Wagner.

“It’s not too bad on the user conflict situation like a lot of other lakes,” he said.

The Division of Wildlife last performed an angler creel on LaDue in 2018, which demonstrated that most anglers were seeking bass.

“The bass fishing is its main draw with about 50% of the anglers reporting that and the rest of the folks just reported fishing for anything,” Wagner said of the last survey.

The division stocks channel catfish and walleyes at LaDue.

“It has a pretty nice fishery for channel catfish,” Wagner said. “We see some pretty good sizes and growth rates there at LaDue. There’s plenty of fish in that 15- to 20-inch eater range and some bigger fish, as well.”

The catfish at LaDue are doing well, reports Wagner, and don’t seem to be crowding out one another like the species does at some other lakes. The state is scheduled for another round of catfish stocking this fall.

The Division of Wildlife also stocks walleye fingerlings every spring.

“It never has produced a great walleye fishery,” Wagner said. “But, there’s enough buzz about it for us to keep (stocking) it.”

In that 2018 angler creel, about 7.5% of the anglers reported fishing for walleyes.

“It does seem like you really have to learn the lake and identify patterns and those anglers who do that enjoy a good (walleye) bite,” Wagner said. “But, if you’re just visiting it a few times here and there you’re probably not going to get into them.”

Wagner said the walleyes, though they are stocked at program rates each year, are a low-density population in LaDue. Likely spotty and spread out, he said.

“But, the walleyes that are in there grow like gangbusters,” he said. “In most years our gill net surveys are comprised of (walleyes) over 22 inches.”

Other fish species include your typical complement of sunfish, bass, crappies, and carp, and northern pike.

“One thing is that the (non-native) white perch are in there pretty thick,” says Wagner. “LaDue is kind of the first place we noticed them.”

Crappies are prevalent at LaDue, but it’s the crappie anglers who run into the white perch more often than not, says Wagner.

A 2020 crappie survey performed by the Division of Wildlife showed a big jump in the crappie population, Wagner reports, but the survey was dominated by small fish (7-8 inches or less).

“In general, I would characterize the crappie fishery as good to slightly above good,” he said. “There are reasonable numbers of 9- to 11-inch fish, but then a whole bunch of fish in there that are less than 9 inches.”

There is no special regulation for crappies here, so anglers will likely sort through a bunch of short fish to get a good number of keepers.

For most of the summer, the waters west of State Route 44 on LaDue is pretty well choked with vegetation, reports Wagner.

“Most of the fishing, especially in the summer, is sort of between the bridges,” he said.

“It’s super abundant if you want to hike and get a bit creative,” Wagner said. “It’s not that friendly for just the casual person pulling up in a car. Around the bridge abutments there are good access points with parking and there’s a big pull-off along the main State Route 422. On the west side of the lake, south of the causeway there’s quite a bit of shoreline access and trails leading down to the lake.”

There is no special fishing regulations on any species at LaDue, so the default statewide regulations are in effect.