Up to the Lake Mina challenge? Trophy ’eyes await anglers 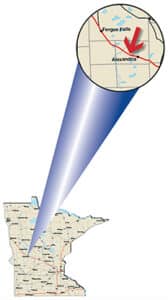 Even though Lake Mina is just 411 acres in size, it’s a unique fishery. Mina is located a few miles west of Alexandria, and anglers must decide if they’re up to the challenge of fishing this lake.

Mina features a lot of deep water, with a maximum depth of 123 feet. Its shorelines are cliff-like, dropping quickly into the abyss, and Mina is a pretty clear lake. The challenge is real.

But Mina also is one of this area’s better options for hooking into a trophy-caliber walleye. Its bass are not large, but they’re numerous, there are panfish for the frying pan, and a few muskies swim in its waters, too.

Walleye fingerlings are stocked in Mina on an every-other-year basis, but the return has been minimal. However, those that do survive grow well, aided by a modest tullibee population – the ideal forage base for growing big walleyes.

“It’s a difficult to lake to fish, but Mina is one in this area that you can legitimately catch a trophy walleye on,” said Dana Freese, owner of Christopherson’s Bait and Tackle in Alexandria. “It’s not a high-percentage lake and you won’t catch a limit, but it does give up 10- and 11-pound walleyes.”

The DNR surveyed Mina in 2020, and although you can count the number of walleyes sampled on two hands, they were quality fish. Walleyes up to 30 inches were measured, and they averaged 21 inches in length.

According to Bill McKibbin, DNR assistant fisheries supervisor in Glenwood, the low-density, high-quality walleye population in Mina has been the norm for years. He says local anglers don’t fish it with the intent of catching a lot of walleyes, but they are aware that it does hold big fish.

“Mina has a reputation for producing large walleyes; it’s a trophy walleye fishery,” McKibbin said. “Walleye abundance has always been limited, but there are 30-inch fish in there.”

The lake’s largemouth bass population is the exact opposite – few trophies but plenty of numbers. If you just want to go and catch a lot of bass, Mina would be a safe bet.

Bass in the 12- to 15-inch range tend to be most common, and they receive limited fishing pressure. This is likely due to their lack of size and the fact that the area is blessed with a whole bunch of other excellent bass lakes.

“You can catch 30 bass, but they’ll be on the small side,” Freese said. “It does have the numbers, but we have way better bass lakes around here.”

Mina’s bluegills grow slowly and tend exhibit a generally small size structure. They are plentiful, but it’s rare to catch a bluegill over 7 inches in length.

Crappies tend to be of the eating-size variety. Fish up to 10 inches are caught from Mina, but don’t expect much for size beyond that.

From an angling standpoint,  plan on sorting through good numbers of small panfish in order to put together a batch big enough to clean and eat.

Mina is not currently stocked with, or managed for, muskies. But a low-density population exists in the lake, likely the result of downstream movement from Lobster Lake, one of the better muskie fisheries in the Alexandria area.

While Mina isn’t considered a go-to muskie-fishing destination, an occasional fish is caught. With an abundance of deep water and the tullibee forage base, the potential for big fish exists.

“We see people fishing muskies out there from time to time,” McKibbin said. “My guess is that if the diehard muskie guys get sick of the crowds on other lakes, they might go to Mina.”

There’s no problem catching northern pike on this lake, although smaller fish dominate the population. The average length of pike in the 2020 survey was just 18 inches, but a few pike at or slightly over 30 inches were sampled.