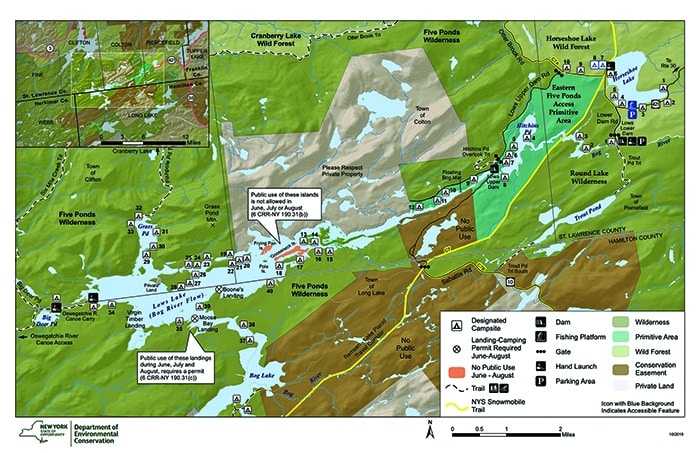 One of the best bass fishing days I ever had took place about 11 years ago. We had just broke the bank on light-weight kayaks and I was ready to test mine out. I rose early and made the nearly 21⁄2-hour drive from my home in the southeastern Adirondacks to the Lows Lower Dam, the main public access point to the Bog River Complex, near Tupper Lake.

I brought very little with me – lunch, water, sunscreen, a life vest as well as a GPS. The only fishing gear was my favorite bass rod and a solid collection of plastic worms.

Paddling continuously at a moderate pace – mainly to test out the new boat – I made my way upstream and into Hitchens Pond, where plenty of folks were enjoying their waterfront campsites. After a short, 100-yard carry at Lows Upper Dam, it was back to a more river-like setting and a straight shot up the Bog to Lows Lake.

When I emerged into the main lake near Gooseneck and Frying Pan Islands – which are off limits to the public during  the summer as they’re deeded as Boy Scout territory – I checked the GPS. In just over two hours I had paddled more than seven miles. Now it was time to do some fishing.

Winds kept me from going further out on the main lake that day, but as I made my way around the islands and some of the sub-ponds, the bass fishing couldn’t have been better. Cast after cast, largemouths came to the boat, including a couple that had to be in the 4-pound range. Going back down the river there was plenty of structure and even more action. What a day it was in the Adirondacks.

Lows Lake is known for it’s remoteness, but when you really think about it, there’s plenty of signs of development. It is, after all, an impoundment and the two aforementioned dams were built by entrepreneur Abbot Augustus Low early in the 20th Century. And there are other signs of past settlement and even vehicle traffic near the upper dam that provides access from the rail station in Sabbatis to the scout camp near the mouth of the main body of water.

Speaking of the railroad, at some point rail access is expected to connect Big Moose to Tupper Lake. If you access this area at the Lower Dam, you will paddle under the tracks between the two dams before you get to Hitchens Pond.

Beyond all of that, however, Lows is pretty wild. So much so that up until a decade ago the best way to get in there was by floatplane, which are now off-limits to the area, making it even more remote.

These days, Lows Lake is managed by the New York State Department of Environmental Conservation as part of the Bog River Complex, a 25,000 acre hodge-podge that includes nearby lands including the Horseshoe Lake Wild Forest and others.

What the canoe-kayak adventurer will find is 25 campsites on Hitchens Pond and another 39 on Lows Lake. The further west you go, the better, in terms of remoteness.

As for the bass fishing, NYS licensed guide Wayne Failing, who for years has operated Middle Earth Expeditions in Lake Placid, routinely flew clients in here during the floatplane days and once told this writer that the bass photos that accompanied his brochures showing anglers with 5- and 6-pound bucketmouths (perhaps bigger) were taken on trips at Lows Lake.

An angler from the nearby Robinwood Club, which can eventually access Lows from connected waters, reports often running out of bait when bass fishing Lows. “Bring plenty of plastics,” he said, which was the reason I had done just that on my trip.

DEC says brook trout were at one time the dominant species here before bass were introduced in the 1980s, and encourages anglers to fish around stream inlets for brookies.

Beyond fishing, this area remains one of wilderness adventure on many fronts. Hearty big game hunters looking for a backcountry experience can likely find it all around Lows, Hitchens Pond and the entire complex.

And for the canoe-tripper, including those who bring a fishing rod, Lows is a key part of a couple of major traverses, the big one being what’s known as the Whitney Loop, a 55-mile trip that includes Round Lake, Little Tupper Lake, Lake Lila as well as Lows Lake and the Bog River. The Adirondack Paddler’s Guide suggests allotting a week or more for this trip.

The Oswegatchie Traverse is an end-to-end trip through Lows to the headwaters of the Oswegatchie River and back to the Inlet, which is accessed between Star Lake and Cranberry Lake off Route 3. This 35-mile trip requires about five days and may prove more rewarding for the trout angler. At one time, the state brook trout record came from this section of the Oswegatchie.

The most common access point for getting to Lows Lake is at the Bog River Lower Dam, which is located off Route 421 roughly six miles east of Route 30, just below Tupper Lake’s southern tip. This location is popular, so early arrival or mid-week trips are suggested. Horseshoe Lake is nearby.

Because Lows Lake resides in both Hamilton and St. Lawrence counties, fishing for black bass (including catch-and-release) is prohibited outside of the open season, which is June 15 – Nov. 30.

As for camping, DEC’s website says Pole, Gooseneck, and Frying Pan slands are reserved for the Hiawatha Boy Scout Council’s exclusive use during June, July, and August. Three landings are also shared with Souts: Virgin Timber, Boone’s and Moose Bay, may be used by the public for camping throughout the year, but a permit is required from a Forest Ranger for use during June, July, and August.

Camping is also restricted to parties of nine or less, but parties of six or less are encouraged.