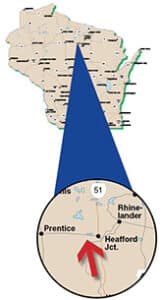 Thanks to its riverine characteristics, Somo Lake, located west of Tomahawk in Lincoln County, contains more fish species than typically found in a northern Wisconsin inland lake. Somo Lake is fed by a number of small streams and rivers flowing in from Price, Oneida and Lincoln counties before the river tumbles downstream into Lake Mohawksin and the Tomahawk River.

The source is the confluence of Somo Creek and Little Somo Creek in the unincorporated community of Clifford that straddles all three counties mentioned above.

The local DNR fisheries team surveyed Somo Lake between April 1-16, 2021, to assess the status of the walleye and muskie populations using fyke (trap) nets. The crew also ran “shocker boats” on Somo Lake on two days in June 2021 to assess bass and panfish.

Somo Lake is a stained water drainage lake with predominately sand bottom, muck, and some boulders and gravel (70% sand, 5% gravel, 5% rock, 20% muck). The lake has 14.2 miles of shoreline.

Somo’s walleye and muskie populations are sustained through a combination of stocking and low-level natural reproduction.

During eight days of walleye-targeted fyke netting, 207 adult walleyes were captured and marked with a fin clip. Crews then followed up those netting efforts by netting fish stunned during nighttime runs in shallow water using electrofishing boats. A total of 66 adult walleyes were caught during those shocking runs.

DNR fish biologists use what now is a standard “formula” to compare fyke-netted fish (fin-clipped) to fin-clipped and “clean” fish caught during electrofishing runs to develop a population estimate. During the 2021 survey, 42% (28 of 66) of the adult walleyes bore the fin clip from the earlier fyke netting work. Based on those results, Somo Lake was estimated to contain 412 adult walleyes for a density of 0.9 adults per acre, not a stellar rating to be sure, but anglers might want to temper any assessment of the lake’s walleye population based on the number because adult fish can easily move into the abundant tributaries at that time of the year to spawn. Those fish can then “drop back” into the lake once the spawning run ends, but that comes after the fishery crew pulls stakes.

An estimated 77% of the adult walleyes were 15 inches or longer, with the bulk of those fish running 15 to 17 inches. The largest walleye was a 27.2-inch female.

Somo Lake has a 15-inch  size limit and a no-harvest slot of 20 to 24 inches. One fish longer than 24 inches is allowed  per day out of a three-fish daily bag limit.

While doing the walleye fyke netting in April, the fisheries crew also caught northern pike and muskies. Of 191 adult northern pike that were netted, 31 (16%) were 26 inches long or longer. The biggest pike measured a very respectable 361⁄2 inches.

During fyke netting in April and the two nights of electrofishing in June, the crew handled 44 adult muskies, of which 9% (four of the 44) were 40 inches or longer. The biggest muskie was a 41.3-inch female. The crew also captured three juvenile muskies that ranged from 181⁄2 to 25.8 inches. Somo Lake has a 40-inch muskie size limit.

Looking at the map, anglers will see Somo Lake sets up a little differently than most lakes, due in part to the fact it’s an impoundment on a river system. The lake has four unique elongated “compartments” or basins oriented from northwest to southeast and linked by gaps in islands or channels. A good portion of the lake’s shoreline is in Lincoln County forest ownership and is undeveloped. Some of those shorelines lend themselves to waterfowl hunting in the fall, or “jump off” spots for small game hunters and deer hunters. Public boat landings are available and water skiing is only allowed from 10 a.m. to 6 p.m.