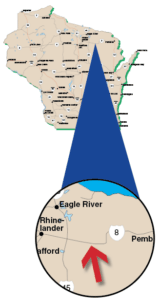 Back in 1885 when the Wisconsin legislature officially recognized the land area known today as Forest County as a county, the big lake that sits on the city of Crandon’s south end was known as Sand Lake. Some time later the name was changed to as Metonga, which still means “sand” in the Ojibwa language. Metonga is actually a phonetic spelling of the Ojibwa word “mitaawangaa.”

Lake Metonga is a drainage lake with a predominately sand and gravel bottom. Its surface area has been put at anywhere from 1,991 to 2,157 acres, with 7.9 miles of shoreline, and a maximum depth of 79 feet. Most reports put the lake’s size at about 2,038 acres. It has two landings, one on the northeast corner on the edge of town and one on the south end.

Metonga does have a sandy beach around much of the lake. It also had extremely clear water, with visibility at some times of the year reaching 30 feet, believe it or not. At most times, visibility ranges from 22 to 26 feet, which means daytime fishing for walleyes can be a little difficult. The trick to daytime walleye fishing is to work deep structure starting at 24 feet or so, and then going deeper. The lake has a number of bars that top out at 20 to 40 feet, so there are plenty of space to fish for deep, daytime walleyes.

Ironically, for a lake of its size, Metonga is not known to contain muskies. Walleyes, northern pike, smallmouth bass and largemouth bass rank as Metonga’s top four game fish species.

The local DNR fisheries team has a fairly good handle on the health of Metonga’s fishery. The lake has been most recently surveyed to different degrees in 2010, 2013, 2016 and 2019. The 2019 survey was aimed primarily at the lake’s walleye population. The local DNR team surveyed the lake that year from May 1-7. Metonga’s walleye population is sustained through natural reproduction.

During the five days of fyke (trap) netting, 1,194 adult walleyes were captured and marked with a fin clip. Two crews then followed the release of those fin-clipped fish by running the shallows at night with electrofishing boats. They captured 80 adult walleye during the electrofishing runs, of which 14% (11 of 80) of those fish wore the fin clip from the fyke net work.

Based on those results – plugged into a formula or model for making the comparison – Metonga was estimated to contain 7,627 adult walleyes. That puts the adult walleye population at 3.8 fish per acre, a rather decent number.

But here’s a little more good news – an estimated 99% of those adult walleyes were 15 inches or longer, but most of those fish ranged from 17 to 23 inches. The largest walleye was a 28.7-inch female.

Although smallmouth bass, northern pike and yellow perch were not the primary targets of the 2019 survey, the DNR crew scienced each of those fish to help fill in information on Metonga’s fishery profile.

Although a fyke netting survey doesn’t typically coincide with the smallmouth spawn, in 2019 the Metonga smallies were at peak spawn when the crew surveyed the lake. They captured just 12 smallmouths 8 inches or longer, and 92% (11) were 14 inches or longer. The biggest fish was a 19-incher. Most of the smallies ranged from 16 to 18 inches.

The crew caught a relatively high number of perch and measured a sub-sample to index the size structure of the population. Of the perch that were measured, 8% were 8 inches or longer, with the biggest going 12.6 inches. Most perch, by a long shot, ran 6 to 7 inches.

Metonga’s walleye population seems to be holding fairly steady. During the 2016 survey, the DNR teams captured and fin-clipped 1,959 adult walleyes. Two crews then sampled with an electrofishing boat and captured 418 adult walleyes. Of those fish, 37% (155 of 418) carried the fin clip from the fyke netting work. That year the team estimated the lake to contain 5,770 adult walleyes for a density estimate of 2.9 adult fish per acre.

The largest walleye captured that year was 28.7 inches.