Dillon’s tailwater fishery shines as much as lake

Zanesville, Ohio — Dillon Lake was created in 1961 by damming part of the Licking River for a flood control reservoir. 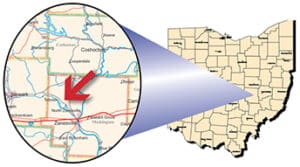 And, this southeast Ohio lake does a good job of flood control. As a result, many of the lake’s fish get flushed into the spillway, which can be a bonanza for anglers.

As far as the fishing goes, the lake has been stocked every year since 1994 with saugeyes.

“The last three gillnet surveys, the total numbers of saugeyes caught per hour was at or above the statewide average for other saugeye lakes in Ohio,” said Don Swatzel, a fisheries biologist for the DNR Division of Wildlife in Athens.

Anglers can expect to catch saugeyes in the 14- to 19-inch range. Saugeyes must be at least 15 inches to keep.

“We rarely see fish older than 2 years old as most are either caught or leave the lake through the spillway,” Swatzel said of the lake’s saugeyes. “This fact creates a very popular spillway fishery for not only saugeyes, but hybrid striped bass as well. Anglers usually target the spillway shortly after a good rain increases the flow of water leaving the reservoir. The spillway area has good parking and easy access to a large portion of the Licking River that is directly below the dam.”

The aforementioned hybrid striped bass are stocked at a rate of 50 fish per acre on an annual basis, depending on hatchery capability.

“There are plenty of hybrids up to 21 to 22 inches in the lake,” Swatzel said. “Again, the Division of Wildlife rarely sees hybrid striped bass older than 2 years old because this aggressive fish is either caught or flushed after a rain downstream into the Licking River.

To catch them, think catfish, according to Swatzel.

“It is amazing how many of the hybrid stripers are caught by catfish anglers using chicken liver as bait, whether in the lake or below it,” he said.

The population of largemouth bass has been better in the past than it is right now. Still, anglers can expect to catch largemouths up to 12 inches.

“I would not characterize Dillon as a ‘great’ bass fishery. Catch rates of recent surveys are typically below statewide average and most of the fish available to anglers will be less than 12 inches,” Swatzel said. “Largemouth bass is the predominant black bass species in Dillon, but there have been catches of spotted and smallmouth bass in the past. The latter two species numbers are very low.”

Bluegills are numerous, but run small, and there’s also a population of pumpkinseed sunfish in Dillon.

“Dillon’s sunfish population is good, but anglers should be prepared to pick through a lot of small fish to leave with a decent stringer,” Swatzel said. “Anglers can expect a good keeper bluegill to be in the 6- to 7.5-inch range. There are pumpkinseed sunfish in Dillon, but they typically run smaller than the bluegill.”

Dillon really shines for catfish, channels and flatheads, according to Swatzel.

“Dillon is an excellent lake to catch channel and flathead catfish,” he said. “There are lots of 15- to 20-inch channels available for anglers to target.”

“A 2018 trap net survey had total catch rates at or above statewide average and even sampled a few channels up to 25 inches,” Swatzel said. “There are no known records of flathead catfish ever being stocked by the Division of Wildlife so the population living in Dillon came from the Licking River and are now thriving in the lake environment.”

If you’re up for a bit of walking, shoreline access for bank fishermen is decent, according to Swatzel.

“I would rate (shoreline fishing access) as fair,” he said. “There is good access around and across the dam, but be prepared for a little walking,” he said. “Additional shoreline fishing opportunities can be found the two ramp areas, the Dillon Lake Marina and Big Run boat ramp off State Route 146. The Dillon State Park beach area on the upper end of the lake has parking and mowed shoreline fishing spots to try.”

Boats with higher horsepower outboards (or even inboards) are allowed on the lake with a stipulation that boat operators run at 10 miles per hour or slower from sunrise to sunset. The lake, therefore, does get some pressure from pleasure boaters and other recreational users.

Dillon Lake is named for Moses Dillon, a post-Revolutionary War entrepreneur who operated a local foundry, founded the village of Dillon Falls, and dammed the Licking River to provide water to the community.

The lake has been co-located with a park since 1968, and the park offers cottages, campsites, a swimming facility, and picnic areas – most of the amenities one would expect from a full service park.

Not only did Scott talk me into hunting two to three miles back in the woods, but also riding mountain

To remain relevant, there is a growing consensus that NAMWC needs to adapt. Effective management in the 21st Century will