Mogadore has the looks, and fishery is top-notch 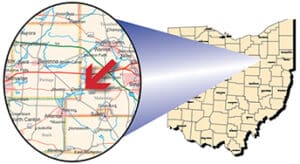 Mogadore, Ohio — The Mogadore Reservoir in northeast Ohio sticks out like a sore thumb – but in a good way.

There’s not a lot of development around the 1,000-acre lake and the development that is there sits back off the lake a bit, said Curt Wagner, fish management supervisor for the Division of Wildlife in Akron.

The lake is owned by the city of Akron, but the fishery is managed under a cooperative agreement by the Division of Wildlife.

“It’s close to Akron, but it feels like you’re in the middle of nowhere,” Wagner said. “It’s one of the most scenic lakes for being so close to an urban center.”

“It’s definitely a little bit of a different lake for northeast Ohio,” he said. “It definitely is sort of a unique experience out there. It’s kind of a rarity up here.”

There are no special fishing regulations on Mogadore, so it follows statewide regulations for bass and catfish.

“The fish that rules there by far and away is bass,” Wolfe said. “It’s probably one of our better bass lakes here in northeast Ohio. It doesn’t get a lot of big tournament pressure because of the electric motor-only provision.”

Mogadore has long been known for its redear sunfish and bluegill populations and that reputation continues today, Wagner said.

“Historically, it’s been known as a fantastic panfishery,” he said. “I wouldn’t call it outstanding at this point but I would still say it’s very good. Redear aren’t quite what they have been, but it still has good eater size sunfish and bluegill.”

Crappies are another draw at Mogadore, and the population of those fish are holding their own, says Wagner.

“For the crappie, we’re hitting 8 inches by 2 years old, so that’s kind of a benchmark,” he said. “It’s decent for crappie. It’s just generally decent for panfish.”

Anglers will also catch a few yellow perch at Mogadore, moreso in the winter months during ice-fishing season, which can be fantastic here.

“What really is a standout to me and what I try to get into each year is that the yellow perch are really coming on nicely,” Wagner said. “There are legimitate, eater-size perch in there that’s not just an anomaly.”

Wolfe said the lake sets up nicely in its yellow perch population.

“That lake essentially still has pretty good vegetation growth across the board,” he said. “There’s a lot of suitable habitat there for (perch).”

The Division of Wildlife in alternate years stocks about 5,000 yearling channel catfish.

“For catfish, there’s a good density and good distribution of sizes,” Wagner said. “There are some big channel cats in there and they’re not so overly dense that they’re stunted. It gets a fair amount of nighttime catfish pressure.”

Catfish is the only thing stocked at Mogadore.

“You have to go all the way back to 1975 when we stocked muskies in there,” Wagner said. “Everything else that’s in there is all self-sustained.”

Wolfe said the Division of Wildlife recently sampled the lake for catfish, so more data will be known shortly on that species in particular.

“The last time we sampled catfish in there was a couple of years ago and it actually was a little low in terms of our catches,” Wolfe said. “But, it showed very good growth. You can get some big fish out of there.”

Wagner mentioned the amount of weed growth in Mogadore, and that is a particularly good thing for at least one species of fish.

“It’s really a fantastic bass fishery,” he said. “There’s big fish in there, certainly, but there’s also just a nice range of sizes down to your 10-, 12-, 14-inch fish that are just fun to catch.”

And, you’ll see a few bass tournament anglers to compete with at Mogadore, but with an electric motor-only restriction they aren’t much of a problem. Gas motors are prohibited.

There are two launches on the lake. One is at Route 43, and the other is a newer ramp just completed in recent years at Ticknor Road.

“But, if the boat has any height to it at all it’s not going to get under the Route 43 bridge to get to the main lake,” Wagner said.

An expansion of the Ticknor Road access is planned for this summer that will add some more parking spaces, Wolfe said.

The old Lansinger Road launch area is now closed to all but foot traffic, says Wagner. A gate is up and closed at the main entrance.

Shoreline access, according to Wagner, is best around the Route 43 launch area. A fishing pier is located there.

“It’s a standout for bass and good to great for everything else,” the biologist said. “There’s nothing in there that rates poor.”

The lake does also have a population of grass carp, and they are off limits to bowfishermen, Wagner said.

“Mogadore should have the signage that says no harvest of grass carp,” he said. “There certainly is some bowfishing for common carp, though.”

There have been sporadic reports of anglers catching muskies at Mogadore, said Wolfe, though that species has not been stocked by the state in a good number of years.