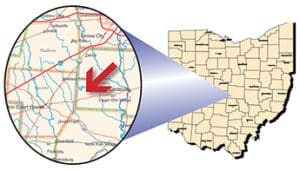 Pancoastburg, Ohio — If you’re looking to fish the main lake at Deer Creek Lake in south-central Ohio, you might run into some tough fishing.

But, head below the dam to the tailwater and the action for a variety of species can be fast and furious, said Nick Radabaugh, fish management supervisor in Central Ohio for the ODNR Division of Wildlife.

The good bite for saugeyes – the only species that is stocked here – usually runs from October to April at this 1,277-acre body of water south of Columbus.

A former record saugeye of 9 pounds and 27 inches was caught from the Deer Creek tailwaters in January 1989. It has since been broken by a 14-pound fish caught in nearby Antrim Lake.

Deer Creek is an Army Corps of Engineers flood control lake, so it does see a good bit of fluctuation in water levels. The corps drop the lake down 14 feet every winter, so that impacts the fishery somewhat, according to Radabaugh.

Most of the saugeyes in Deer Creek range from 10 to 28 inches, and they’re mainly caught in the tailwater area. Saugeye is the only species stocked in Deer Creek with 150 fingerlings per acre poured into the lake each year.

“On lakes that we consider spillway fisheries that have a high flow-through we stock a little bit more,” Radabaugh said. “On a lot of our lakes, we stock about 100 (fingerlings) per acre. So, that works out to about 190,000 fingerlings each spring.”

Deer Creek Lake was the first lake in Ohio ever stocked with saugeyes, starting in the 1970s, says Radabaugh.

“And saugeye did really well there and they still do,” he said. “When we go back in the fall and sample the young-of-year saugeye that we stocked in the spring there’s always tons of them. They grow well, but they just don’t stay in the lake. It’s definitely a saugeye factory.”

“For whatever reason, it can grow young saugeyes like nobody’s business,” said Ethan Simmons, another central Ohio fisheries biologist, about Deer Creek. “They just do phenomenally well there.”

The spillway and tailwaters below the dam is where this lake really shines, said Radabaugh.

“The other thing that’s unique about the spillway is that stretch of Deer Creek flows south and hits the Scioto River,” he said. “There are no other dams in the way from there to the Ohio River. So, you can end up with a lot of different (species) in the spillway. In fact, it’s one of the few places where we’ve heard of people catching paddlefish. There’s just no impediments for those big river fish to come up there.”

One record still stands at Deer Creek. Richard Knisley, of Washington Courthouse, was fishing for catfish in a feeder creek to Deer Creek on May 24, 2015, when he caught a record-breaking, 18.32-pound hybrid striper. The fish measured nearly 32 inches in length.

Fish of that size, however, are likely few and far between as hybrid stripers haven’t been stocked for a number of years and there is no reproduction.

There’s a good population of channel catfish and the top recommendation is to fish the creek channel at the upper end of the lake with cut shad. In early spring, anglers fishing the dam also do fairly well. Some fish have been reported up to 20 pounds here.

Fall sampling for crappies showed good numbers of fish, black and white, larger than 9 inches. Look for downed trees and cast minnows into them, particularly in April and May. There is a 9-inch minimum keeper requirement and 30-fish daily bag limit on crappies.

“It’s one of the lakes where it seems the crappie regulation has done well,” Radabaugh said. “Sampling results have shown good growth. Crappies there have been doing really well the last decade or so, so there’s no reason to remove it.”

Anglers troll for crappies with some regularity here, particularly in the summer months.

“Right now, there’s just about equal numbers of black and white crappies,” Radabaugh said. “But, it’s really just been in the last decade where we’ve started to see black crappies there. Now, you have a nice mix of both.”

Simmons, the other fisheries biologist in this story, said Deer Creek rivals Delaware Lake in its crappie population, which serves as a high compliment for Deer Creek.

Largemouth bass are rated decent, with most of those fish ranging from 10 to 14 inches, and the bite is especially good in the fall.

“I would characterize it as a numbers rather than a size lake,” said Radabaugh. “Lots of fish in the 15-inch range, but we did get a 6.5-pounder out of there a few years ago.”

The Division of Wildlife rates the white bass population as excellent and suggests fishing for them during their spawning run in late April and early May. Sizes range from 8 to 12 inches. Deer Creek, upstream from Yankeetown Road, can be a productive spot for white bass, smallmouth, and rock bass in the spring.

Anglers should focus their efforts on the Tick Ridge area for white bass and saugeyes. That’s about the only location on Deer Creek that contains some sort of structure, according to Radabaugh.

Deer Creek Lake is part of a state park of the same name that is about 25 miles southwest of Columbus. The lake is not deep with a maximum depth of 35 feet and it has primarily a silt, sand, and gravel bottom. It was established in 1968 as a flood control reservoir.

The adjoining Deer Creek Wildlife Area is 3,710 acres and hunting for deer, rabbit, and squirrel is permitted in some areas of the park and the wildlife area.