Lexington, Ohio — If you’re looking to catch some good sized largemouth bass, anglers would be well suited to focus their efforts on Clear Fork Reservoir in north-central Ohio. 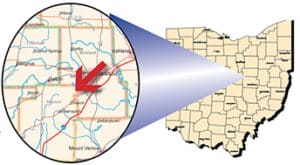 Mike Wilkerson, fish management supervisor for the DNR Division of Wildlife in the region, calls Clear Fork one of the top bass destinations in the state.

“That’s a fantastic bass lake,” said Wilkerson. “It’s one of the best bass lakes in the state. It’s definitely in the top five for size and numbers.”

Wilkerson said as recently as 2010 there was nothing except very large bass in Clear Fork. The Division of Wildlife just recently electrofished Clear Fork to estimate the bass population.

“We were seeing plenty of fish over 20 (inches) and some that were over 22,” said Wilkerson. “I’m guessing they were easily 6- to 7-pounders.”

Bryan Kinter, a fisheries biologist for the Division of Wildlife in Findlay, said it’s not too uncommon to see 5-pound-plus bass come out of Clear Fork.

“It’s a great largemouth lake,” Kinter said. “Especially for size. There are good numbers of 20-plus-inch fish out there, particularly in the springtime. In the spring, you’ll get those big females with eggs in them for spawning, which really pushes up the weight.”

The lake is a frequent host to summertime bass tournaments, particularly on the weekends.

Muskies are the only species that are stocked at Clear Fork today, but that wasn’t always the case.

“We tried (stocking walleyes) back in the 1950s and 1960s and they didn’t perform very well, so we stopped stocking them,” said Wilkerson. “With the muskies there and the largemouth bass, there are a lot of predators in that lake.”

Muskies are stocked at a rate of one per acre, which means that Clear Fork gets about 1,000 new muskies per year. Some of those specimens are large, too, said Wilkerson.

“We’ve seen 50-inchers come out of there,” Wilkerson said. “It used to be a brood stock lake for muskies, but here about 12 years ago we had (viral hemorrhagic septicemia) in there, so we haven’t used it for (brood stock) since then.

In the most recent sampling for bass, Wilkerson said the Division of Wildlife crew saw muskies that were 44 and 45 inches.

“There’s been a lot of consternation from anglers that the (muskie) population is down and it may be down a little bit,” he said. “But, there’s still a strong population of muskies there and they’re still growing really well.”

White bass is also a species that anglers chase here.

“We’ve never had a lot of luck sampling them, but there’s a spring run on them up into the tributaries,” said Wilkerson. “(Anglers) do fairly well on them at that time of year, but you don’t hear much about them outside of that.”

There’s also a decent population of both black and white crappies. There was formerly a 9-inch minimum keeper requirement for crappies and a 30-fish daily bag limit, but that regulation has been removed, said Kinter.

“With the crappies there, there are decent numbers but generally a large number of those are 7- or 8-inchers,” he said. ”So, the regulation that we put on wasn’t having the desired effect, so we took it off.”

Channel catfish are not stocked, but the  population is self-sustaining.

There are several areas on the south side of the lake that offer good shoreline access, said Wilkerson.

The lake allows boats of unlimited horsepower with the caveat that there’s an 8 mph speed limit, which is enforced by the City of Mansfield.

Boaters need to be clear-headed at Clear Fork, said Kinter.

Wilkerson sums up Clear Fork in this manner:

“It’s got a lot of vegetation in it. There’s a lot of downed trees along the shoreline also,” said Wilkerson. “Probably the best spots to catch a bass is down by the dam.”

Bullheads are another option for anglers who have a way of making use of these fish – perhaps via the smoker, said Wilkerson.

“If you want to target bullheads, that would be a great lake to do it,” he said, adding that 10- to 12-inch bullheads are present. “They have some weight to them as well.”

Clear Fork Reservoir was created in 1950 by the damming of Clear Fork River and several smaller streams that feed the bigger river. It is owned by the city of Mansfield and serves as the cities municipal water supply.

It may not be one of the largest lakes in Ohio, but it fishes like one of its best, those in the know say of this impoundment in Richland and Morrow counties.

It has one main boat launch, a marina, a campground, four picnic areas, and seasonal docking facilities.

Clear Fork is a popular lake on the fishing tournament circuit with muskie and bass clubs. But, you won’t be run off the water by recreational users due to the limited mph restriction.

According to Tom Cross’ Fishing Ohio, Clear Fork Creek below the dam offers some great small stream fishing opportunities for bass, bluegills, and the occasional muskie. Parking for stream access is at the bridge on Lexington-Ontario Road.