Scenic and quiet, try Worchester Lake for a change 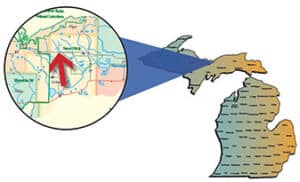 You won’t find any bass or walleye boats on Schoolcraft County’s Worchester Lake. In fact, you’ll be hard pressed to find any type of a motorized boat on the lake. That’s because Worchester Lake, also called Wolf Lake by some of the locals, has no boat ramp. A two-track located on the east shore provides carry-in access. A large section of the shoreline is accessible via public access through either state-owned land or through the commercial forest land access program.

That said, if canoeing, kayaking, or float tube fishing are on your radar, Worchester Lake might be worth a second look.

The fishing isn’t great on Worchester Lake where anglers catch a lot of undersized northern pike and yellow perch, and a few small pumpkinseed sunfish. But the action is steady and the solitude and natural beauty are enough for some to give the lake a try.

“Worchester Lake remains a medium-sized, shallow, eutrophic lake with an undeveloped shoreline, which contains fish species typical of inland lakes in northern Michigan,” wrote DNR fisheries biologist John Bauman in a summary of the most recent survey of the fishery in the lake.

Worchester Lake is a shallow, 120-acre lake located in northwestern Schoolcraft County, about 11 miles northeast of the town of Shingleton. It’s located in the headwater region of Marsh Creek, a tributary to the main branch of the Manistique River.

Two unnamed streams flow into the lake from the north while Marsh Creek, located at the south end of the lake, is the only outflow. Worchester has a maximum depth of just six feet and approximately 50% of the lake is less than three feet deep.

“Fisheries management in Worchester Lake has historically been limited due to the shallow nature of the lake and likelihood that winter and summer fish kills occur often,” Bauman wrote. “Although no fish kill events have been documented researchers and managers have suspected that this lake experiences these events due to the shallow depth of the lake. These fish kill events are part of a natural process yet make long-term management of these shallow water bodies difficult.”

The shoreline of Worchester Lake is relatively undeveloped with just a few homes and cabins on the northern shore.

Fisheries management of Worchester Lake has been limited but began during the early 1930s when walleye, bluegill, and yellow perch were stocked. It is unknown what the fish community may have been comprised of prior to that time. No stocking has occurred in Worchester Lake since 1939, likely due to the poor return of those species stocked during the 1930s.

A total of 610 fish representing eight species were collected during the most recent survey of the fishery in Worchester Lake.

Northern pike, yellow perch, and pumpkinseed sunfish were the game species captured in the survey

A total of 91 northern pike were collected. They averaged 19.9 inches in length and ranged from 9 to 28 inches. Only 3% of the total catch met the minimum legal size of 24 inches or greater.

DNR biologists hope to get the state Natural Resources Commission to change the pike regulations on Worchester Lake to reduce the biomass of the lake’s top predator and to improve the size structure. Such a change could also give perch a better chance to grow bigger

Yellow perch collected in the survey ranged from 2 to 6 inches in length and averaged just 4.5 while the sunnies ranged between 1 and 3 inches.

“Capture rates in large and small mesh fyke nets suggest that Worchester Lake yellow perch are also less abundant compared to other medium sized shallow waterbodies in the region,” Bauman wrote. “For example, medium size shallow waterbodies typically have capture rates more than four times higher compared to Worchester Lake. Therefore, a change in regulation, which increases harvest of northern pike, may in turn benefit yellow perch due to an increase in survival. Angler harvest may also explain the size and low abundance of yellow perch in Worchester Lake, however there are no recent angler reports that would support that harvest might be impacting the population.”

The nearby Shingleton and Seney areas are recreational destinations in the Upper Peninsula that offer outdoor activities including camping, fishing, hunting, ORVing, hiking, ice fishing, and snowshoeing.