Hammertown in southeast a decent fishery

Jackson, Ohio — Jackson City Reservoir, perhaps better known as Hammertown Lake, once was considered a trophy bass fishery, but that is probably not an accurate description of this southeast Ohio lake any longer. 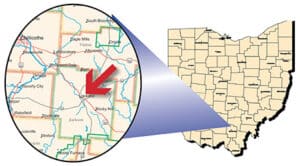 Now, it’s likely just a place where fish are plentiful, but the idea of putting a big lunker in the boat is a stretch.

Sitting among the rolling hills of southeast Ohio, the 190-acre, horseshoe-shaped lake serves as a water supply for the city of Jackson. It is deep and clear, averaging 20 to 40 feet in most places with some deeper water up to 60 feet at the dam.

Largemouth bass are protected by a 12- to 15-inch slot, a regulation that’s been in place since 1990. A five-fish daily bag is also in effect. Bass are numerous, but not large in most instances.

“The population is dominated by 10- to 12-inch bass. Bass electrofishing surveys conducted in the springs of 2017, 2012, and 2008 all showed a lack of fish larger than 15 inches. However, in the 2017 survey, Division of Wildlife fish management personnel did capture a 22 ½-inch, 7.3-pound female bass in the western, shallow end of the reservoir,” said Don Swatzel, a fisheries biologist for the Division of Wildlife in Athens.

In a surprising twist, spotted bass turned up for the first time in a survey a few years ago. There are no records of spotted bass ever being stocked here, according to the Division of Wildlife.

“During the 2017 electrofishing survey, spotted bass were documented in decent numbers,” Swatzel said. “Most of these fish were in the 10- to 12-inch range, much like the largemouth bass. We did not see spotted bass in the 2012 nor the 2008 surveys. District 4 fish management will conduct another electrofishing survey in the spring of 2023. This survey will give us an updated look at how this population of spotted bass ( largemouth bass also) is faring and if it still inhabits the lake.”

Saugeyes have been stocked at Hammertown since 1991 at a rate of about 100 fish per acre annually, which amounts to about 16,500 fingerlings. There have also been a handful of years in the past decade where the state’s fish hatcheries produced enough saugeyes to double the stocking at Hammertown, Swatzel said.

“I would still characterize Hammertown as a below average saugeye fishery, though,” he said. “Recent surveys show the adult population made up of primarily 15- to 16-inch fish, with a few fish up to 24 inches, with a catch rate more than half the statewide average. Due to the depth, water clarity, and fact that the lake is biologically unproductive can make it very challenging to anglers. All that said, I speak regularly with several anglers who have patterned the Hammertown saugeyes and do quite well catching this species, in numbers and size.”

Bluegills are small and numerous. Most of the bluegills here are less than 5 inches in length, said Swatzel.

Redear sunfish are of above average quality (7 to 11 inches), according to Swatzel, although the Division of Wildlife does not conduct sunfish surveys. Most of the redear sunfish are bigger than the bluegills, though, Swatzel said.

“The DOW no longer does a targeted survey for sunfish in this reservoir,” he said. “However, while conducting surveys for other species of fish, DOW personnel still see above average redear sunfish. Rocky banks with rooted aquatic vegetation seems to be the habitat that holds this sunfish.”

For the past 20-some years, Hammertown has held a trout fishing derby on the second to last weekend in April. The Division of Wildlife pours in 3,000 catchable rainbows (10 to 13 inches) for this event, and a few of those fish might live to see another day due to the lake’s deeper waters. It’s not enough to maintain a stable trout population, though.

Channel catfishing opportunities continue to be decent but not overwhelming, due to every other year stockings.

“Hammertown is being evaluated for potential changing in stocking strategies to try and improve the overall condition of the channel catfish in this lake,” Swatzel said. “A 2015 trapnet survey showed the population to be below average in numbers and size compared to Ohio statewide averages. Average length of catfish caught in the survey was 11¾ inches, with a definite lack of bigger fish. Excessive numbers of channel catfish in these even year stockings may be creating to much competition for available food, causing poor growth and potentially survival.”

Yellow perch have been stocked in Hammertown Lake starting in May of 2016 in hopes of providing another opportunity for anglers. It takes yellow perch at least three years of growth before they reach suitable size that fishery personnel can effectively sample the population.

“It receives approximately 40,000 fingerling yellow perch annually in the spring,” Swatzel said. “Division of Wildlife gillnet surveys have been unproductive, and it remains unclear if these stockings are creating a viable fishery. Evaluation continues to determine if stockings should continue.”

There are also white bass present in Hammertown Lake, which have been captured in gillnet surveys. The population isn’t large, but some fish can reach up to 12 inches.

For boating anglers, its electric motors only due to the lake’s status as a municipal water supply. It has one boat ramp located on the western shore, and shoreline access for anglers is good, said Swatzel.

The best places for shoreline access is off Circle Drive, on the lake’s east shore, at the city park.