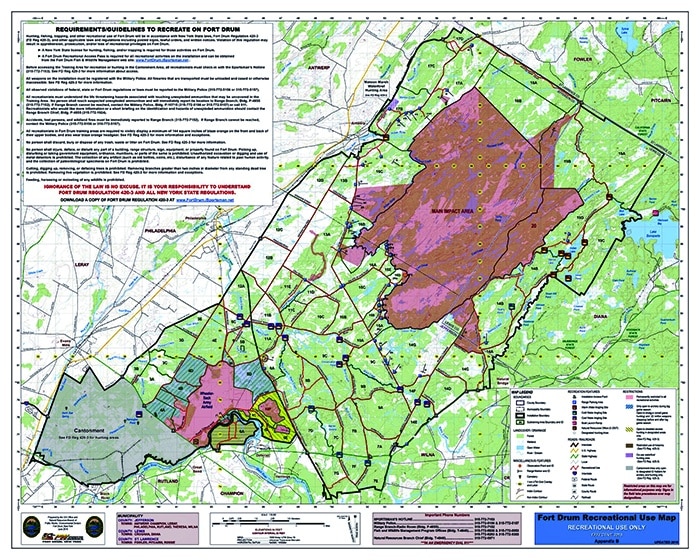 Plenty of fish at northern N.Y. military base 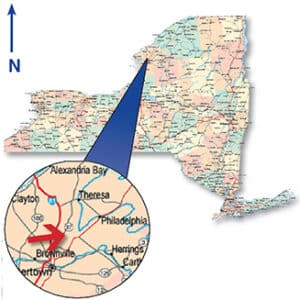 It’s the home of the famed 10th Mountain Division (light infantry) but it also holds a multitude of fish and game species, big and small.

A good portion, about 70,000 acres, of the Fort Drum U.S. Army Reservation’s 107,265 acres are available to sportsmen. And for those who have honorably served in any branch of the U.S. military, about one third of the base’s 8,000-acre Cantonment area is open for hunting to anyone with Department of Defense identification. The public can fish there as well.

Fort Drum is located in northern New York in Jefferson and Lewis counties, between the Adirondack Park, the St. Lawrence River and Lake Ontario. So not only are there plenty of outdoor recreational activities on base, but even more nearby.

But the base is popular with sportsmen. A century ago it was primarily farmland. Then, ahead of World War II, it was expanded and numerous homes, farms and five villages were absorbed into the base.

Today, excluding the Cantonment area, the main Impact area and that around the Wheeler-Sack Army Airfield, there is plenty of room on lands that are classified as “Training” for many forms of outdoor activities.

Fort Drum has three lakes and four ponds totaling 506 acres that are commonly fished. Indian Lake (184 acres) is the largest lake on the installation and holds bass and northern pike. The state stocks a handful of trout streams on the base.

“There’s a fair number of people that fish,” Rainbolt said. “But there’s a lot of fishing opportunities all over the North Country so I wouldn’t say you come to Fort Drum to go fishing like you do to go hunting.”

Those who chose to recreate on Fort Drum, including sportsmen, need to obtain a recreation pass through the facilities’ I-Sportsman interface, which Rainbolt said is tailored to smartphones and computer apps. The interface also allows hunters and anglers to register for three zones, change zones, check in and check out, and report harvest results. Registration remains free for all sportsmen.

The Fort Drum Recreational Access Pass is required and check-in procedures must be followed before entering the Training area. Passes are free and valid Jan. 1 to Dec. 31.

You may enter two hours before sunrise and must exit no later than two hours after sunset. Options are available for tracking wounded game or looking for lost hunters. Weapons, including crossbows and compound bows transported in a vehicle, must be unloaded and encased.

New York State regulations apply in terms of fish and game harvest. Blaze orange has long applied to hunting on Fort Drum but differs from the state regulation in that 144 inches must be worn on the font and back of the body in addition to an orange hat. Turkey hunters must wear orange when moving and display it near their calling location.

Fort Drum is located 6 miles east of Interstate 81, and 10 miles northeast of the City of Watertown which is the largest U.S. city within a 50 mile radius.