Detroit Lakes panfish anglers have a soft spot for Cotton 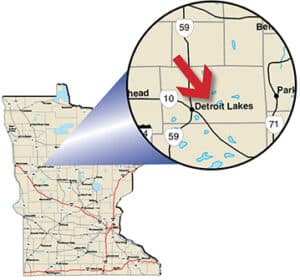 Anglers familiar with the Detroit Lakes area are well aware of its abundant fishing opportunities. Point your vehicle any direction in this region and you’re going to find water.

But maybe even more impressive than the sheer number of lakes to fish are the countless bodies of water that have the capability to produce quality crappies and bluegills year after year.

This area should be at the top of any list when good-sized panfish are the topic of conversation. And mentioned as an option should be Becker County’s Cotton Lake, a 1,763-acre system that’s long been a prized panfishing destination.

“We have a lot of people who head (to Cotton) to fish for bluegills and crappies,” said Mike Witt, of Quality Bait and Tackle in Detroit Lakes. “Cotton gets (panfishing) pressure year-round. (Anglers) don’t seem to get a break, but it still has nice panfish in it.”

The lake’s physical features – an abundance of vegetation and prime spawning habitat – bode well for Cotton’s panfish. Natural reproduction is typically strong, which is evident by the wide range of sizes you’ll find among its crappie and bluegill populations.

The DNR surveyed Cotton last summer, and results from that survey showed what most surveys have in the past: good numbers of bluegills and quality fish. Crappie numbers were low, but summer sampling gear typically doesn’t paint an accurate picture of a lake’s crappie population.

Bluegills over 8 inches were abundant in that survey, with some fish over 9 inches in the mix. The few crappies that did show up were over 12 inches in length.

“Bluegills just seem to pull off strong year-classes in there,” said Nathan Olson, DNR Fisheries supervisor in Detroit Lakes. “And it’s one of the main lakes in the area (where) people go to catch crappies. Ten-inch crappies are common.”

Cotton’s walleyes also looked like they were in good shape during last summer’s assessment. Gill nets averaged over 5 walleyes per lift, which was up from 3.8 fish per net in 2016.

The walleyes sampled averaged 16 inches in length, but an abundance of short fish appears to have Cotton set up for good walleye fishing in the not-too-distant future as well.

The lake is stocked with walleye fingerlings on an every-other-year basis, and natural reproduction is strong enough to be part of the equation, too.

There are two significant walleye year-classes coming up – 2018 and 2019 – that are getting close to keeping-size caliber. Those walleyes should be between 12 and 14 inches long by this summer.

According to Witt, many anglers steer clear of Cotton’s walleyes and get downright frustrated when fishing for them. The lake has an abundance of rock bass and northern pike, which take their share of bait and/or hooks  intended for walleyes.

“We don’t hear as much about walleyes as we do panfish from Cotton,” he said. “All I know is there’s a lot of rock bass and small pike to fish through if you’re after walleyes.”

The northern pike do run small in Cotton, with the vast majority rarely growing beyond hammerhandle status. Pike numbers also are high with more than 13 pike per net showing up in last summer’s survey.

There is some good largemouth bass fishing to be had. It’s more of a numbers game on Cotton, with 12- to 15-inch fish fairly abundant and the occasional bigger bass being caught.

Perch numbers are high, and a fishable population of bigger fish, 10- to 12-inchers, does exist. Olson said the best time to catch the bigger perch is right now.