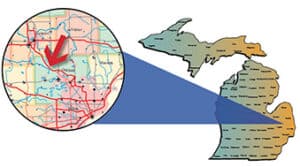 Heron Lake in the Holly State Recreation Area in southern Michigan is a great family lake. It features an abundant panfish population, although the sizes of the fish are mostly stunted. Anglers will get a lot of action, but the catch will likely be undersized. There also are fair numbers of largemouth bass and northern pike in the lake, but again the fish do not grow to large sizes.

DNR Master Angler records indicate limited entries from Heron Lake including a 15.25-inch crappie that was caught in 2018 and a 10.25-inch bluegill caught in 2016.

“There are various panfish available to anglers. However most panfish seem to be growing slower than the state average,” wrote DNR fisheries biologist Jason C. Gostiaux in a summary of a 2018 survey of the fishery in Heron Lake. “The abundant panfish community is beneficial for a popular lake, which draws families from the Metro-Detroit area and allows children and adults to experience success while fishing if they are focused on numbers, but harvest-oriented anglers may look elsewhere depending on the species they are pursuing.”

Heron Lake is an impoundment in the Holly State Recreation Area located in the northwest corner of Oakland County approximately five miles east of the town of Holly. The lake is part of the headwaters of Thread Creek within the Flint River Watershed.

The HSRA is managed by the Michigan DNR and about 80% of the shoreline of Heron Lake is public land. In addition to fishing, the HSRA offers an 800-foot sand beach, a public boat launch with parking for 25 to 30 vehicles, a fishing pier, hiking, mountain biking trails, a disc-golf course, and a picnic area,. Boat rental is available fro Memorial Day through Labor Day for various forms of watercraft including boats, stand-up paddle boards, kayaks, and canoes, however no gas motors are allowed.“

Originally, Heron Lake was a five-acre natural lake but in 1970 the Fisheries and Parks and Recreation Divisions of DNR created the current impoundment with modifications to the discharge of Thread Creek Dam. The modifications provided a larger area for recreation and the lake is heavily utilized today by anglers and other water recreation enthusiasts.

Currently the water level is maintained where surface water is discharged to Thread Creek. The maximum depth of the lake is about 40 feet and less than 10% of the lake is deeper than 15 feet.

“Limited shoreline development has maintained good water quality and natural nearshore habitat in Heron Lake,” Gostiaux wrote. “Although Heron Lake receives a lot of activity in the summer months, the setting is quite rural for southeast Michigan and there are only four homes along the lakeshore. Recreational opportunities at Heron Lake are plentiful for people from the Metro-Detroit area.”

Numerous campsites also are available for those who want to stay for the weekend, or longer.

Heron Lake has been actively managed by the DNR since it was created in 1970. Over the years largemouth bass, northern muskies, walleyes, hybrid sunfish, tiger muskies, and fathead minnnows have been stocked. In more recent years the DNR stocked 1,320 northerns in 2017. The last walleye stock was in 2004.

The lake has been surveyed eight times in the last 40 years with the most recent survey conducted in 2018.

A total of 2,299 fish were collected during that survey representing 19 species.

Bluegill and pumpkinseed sunfish were the most abundant species in the survey comprising 50% and 25% of the total catch by number, respectively. Largemouth bass and northern pike were the top predators. Sand shiner was the primary forage species.

“Heron Lake continues to support a warm- and cool-water fish community. The bluegill population remains in high abundance and struggling with slow growth like past surveys, and a limited predator community may be playing a role,” Gostiaux wrote. “

Largemouth bass was the most abundant predator. They ranged up to 19 inches but averaged just 9.8 with 26% over the legal possession size of 14 inches. Light numbers of northerns ranged to 29 and averaged 24.6.

“Heron Lake should continue to be managed as a warm-and cool-water fishery with emphasis on the panfish community,” Gostiaux wrote. “The accessibility and other recreation activities at Heron Lake make it a great destination for families.”