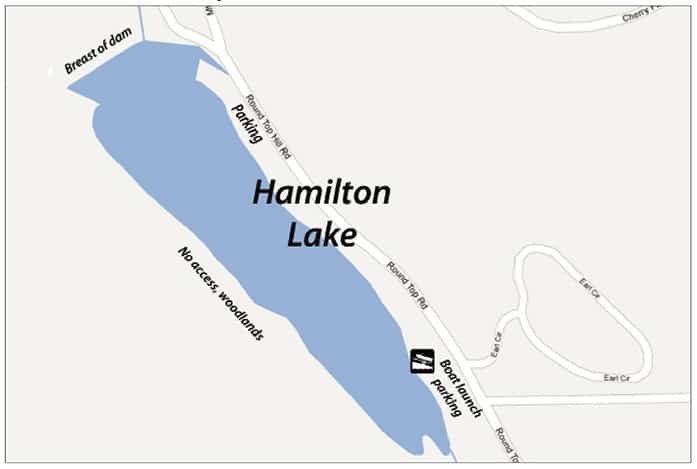 Hamilton – the lake, not the musical – a hit this winter 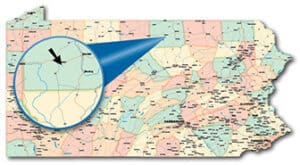 Frequently, I get engrossed by a distressing distraction when ice fishing Hamilton Lake in Tioga County.

I look up the hill on the west side where I’m confronted by the sight of the county prison. I think, “there but for the grace of God go I,” and I’m sure the incarcerated would give their wisdom teeth to be on the ice – no matter how cold the day – rather than behind bars.

But then the tip of my ice rod gets yanked down by what I initially presume is a heavy trout and I forget all about the woes of man and instead concentrate on the joys of fishing.

And with Hamilton Lake brimming with stocked trout, there are a lot of joys to ponder.

Named after a Founding Father and signer of the Constitution – but not for a popular musical – Hamilton Lake offers 42 acres of ice fishing that extends well into the winter and often the early spring.

On Hamilton, the ice season is bolstered with a stocking of rainbows on or about Oct. 7. In those years, when ice fishing extends into the middle of March – quite common here even with a warming climate – a mid-March stocking that following spring continues some icing for a bit.

Now for the lay of the land, or the ice. Hamilton Lake dams Charleston Creek. The upper end of the lake is very shallow, an okay place for spring warmwater fish but not any good for ice season. I know; I tried.

There’s a large refurbished parking area along Round Top Road and for all practical purposes this is where the ice locations begin. Park and go down the slope, heading to the right, toward the dam.

The slope that forms the shoreline on that side of the lake extends out into the water, also as a gradual slope. So, you need to get into the deeper water, say at least 6 or 7 feet, to catch trout.

Ice anglers know where that demarcation is from the entry point up some 100 yards toward the dam, and a second, smaller pull-off along Round Top Road. If you’re new to the place, look where other ice fishermen are situated to find the line.

However, it’s a funny thing. Many anglers won’t move from this drop-off line out closer to the center of the lake and they should, particularly on bright sunny days.

There’s a pumphouse, or some such small building, on the western shore on a private road coming down from the prison. If you’re willing to drag your sled across the lake, there’s a good ice-fishing hole below the elevated pumphouse.

Eventually the stocked trout make their way across the lake to this spot. So do anglers who want some separation between themselves and their fellow ice fishermen. However, the spot is no longer a secret. Blame me, social media and modern electronics.

Some ice anglers also like to work the corner of the dam on that side. I haven’t spent enough time there, so I can’t recommend it one way or another, but I have seen some trout caught in the upper, far corner.

The problem is, you’ll be working much deeper water and since winter rainbows often suspend, you’ll have to determine what depth you are  going to fish.

I prefer the shallower drops for winter trout. Other anglers like to work below the steep hill on the prison side of the lake – again deeper water.

Beside trout, Hamilton Lake also has some nice chain pickerel, which will cooperate in winter. The largest I’ve caught, or seen others nab, was just over 3 pounds, but I keep hearing rumors about bigger ones

The pickerel seem to like the upper bend of the lake, way out from the shadow of the dam but along that trajectory. I thought, my goodness I should be able to catch winter pickerel in the shallower upper end of the lake, but it was not to be.

For the record, Hamilton’s source, Charleston Creek, is stocked twice in April from the dam down to the mouth. I fished this narrow meandering creek once just a few years ago and had a fun morning catching browns and rainbows (it also gets golden trout).

For access to the ice fishing core, there’s parking off Round Top Road in a big lot at the upper end of the lake

To get there from Wellsboro, take Route 6 and make a left turn just past the Weis Market onto Round Top Road. Follow Round Top less than a mile to the pull-off, which puts you closer to the dam.

But be aware that sometimes this pull-off is not priority plowed if you visit after a snowfall. In that case, proceed a bit  further along on Round Top to the large lot that was rebuilt just a few years ago.

Finally, anyone who attempts to sings show tunes from “Hamilton” while ice fishing this lake is immediately incarcerated by the Frozen Chozen.

WHAT YOU SHOULD KNOW: Hamilton Lake dams Charleston Creek.

A small building on the western shore is a good ice-fishing hole if you’re willing to drag your sled across the lake.

HOW TO GET THERE: From Wellsboro, take Route 6 and make a left turn just past the Weis Market onto Round Top Road. Follow Round Top less than a mile to the pull-off, which puts you closer to the dam.