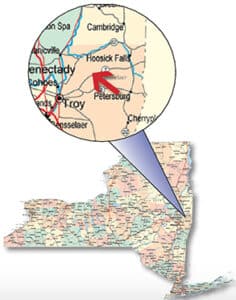 When you look at the accompanying lake map for the Tomhannock Reservoir, in Rensselaer County, you’ll notice there’s no symbols or icons indicating a boat launch location, not even a simple car-top hand launch.

That’s because the Tomhannock has a set of rules all its own when it comes to access, period. There is also no swimming or wading in this sizable body of water, which serves as a drinking water source for the City of Troy, and therefore must be protected, and allow limited access..

The New York State Department of Environmental Conservation works with the city, which allows shoreline fishing and even ice fishing access, both of which are limited to daylight hours.

“It’s a cooperative agreement,” DEC Region 4 Fisheries Manager Chris VanMaaren said. “We get public access in return for minimal management. It is a self-sustaining walleye fishery and that’s kind of what our management focus is. But there’s a pretty wide aspect of species.”

At the top of that species list is likely walleyes and VanMaaren admits that there’s little information, other than angler feedback on the walleye fishery.

DEC’s last comprehensive survey was done in 2007. At the time, white perch were the dominant catch with many in the 10- to 12-inch range. There were also good numbers of walleyes, though the maximize size from DEC netting was only 19 inches.

“That’s a snap-shot,” VanMaaren said of the 14-year-old survey. “It doesn’t represent the overall size structure for the population. We didn’t do an extensive survey and that was 14 year ago. My estimation is that there’s decent walleyes to be caught as far as overall length.”

DEC’s website states that the Tomhannock Reservoir provides a variety of sport fishing opportunities. Yellow perch, black crappies,and bluegills comprise the biggest share of the panfish catch during the warm-water season, while smallmouth bass are the most important game fish. There’s also largemouth bass and chain pickerel, to compliment the walleyes, along with some common carp, which have a dedicated following all their own, but could be inhibited because night-fishing is not allowed.

Access is limited to shore-fishing and ice fishing. Again, there are no boat launches. VanMaaren said “the reservoir has roads that circle it, there’s a number of different pull-offs and folks do spread out. On average, during the winter, we see more folks down towards the deeper drop-offs. More towards the west end, I think that’s where they key in for walleyes in the winter.”

Speaking of the walleyes, with winter on the way they will be the fish species most likely on the minds of ice anglers.

“Obviously it’s harder to catch those during the summer because they’re just too far from shore,” VanMaaren said of the walleyes.

Along with the walleyes, during the ice fishing season, the action centers around yellow perch, bluegills, black crappies, and some chain pickerel. The ice fishing season runs from Jan. 1 through March 15, again during daylight hours only. Ice fishing is permitted only on that part of the reservoir from the dam to a continuous line extending between two orange markers and on that part from the south end of the reservoir northerly to a continuous line between two orange markers.

But the main restrictions ice anglers need to know is that only hand or electric (battery) powered augers are allowed. No gas augers are to be used, including those powered by propane.

Ice anglers had better pick a fair-weather day for fishing the Tomhannock as no ice shanties of any kind are allowed either.

“One regulation we’ve struggled with a little bit is the lack of allowance for shanties,” VanMaaren said. “Most anglers, when they’re on the ice, use a shanty but the city has provisions not to allow it. They want to make sure they can monitor what’s going on out there.”

And when it comes to the rules imposed by the city, VanMaaren said anglers had better follow them for the common good of the entire angling community. He wished to remind anglers that access to the Tomhannock is a privilege that could easily be revoked.

“Keep in mind that it is a drinking water supply. It gets a lot use, based on its proximity to a populated area,” VanMaaren said. “Its a big water body and it provides a lot of opportunity. We have to really work with the city to make sure that we don’t lose that. People need to make sure they don’t leave garbage. They have to treat the resource with respect.”

In terms of creel and size limits, state regulations apply. There is no boat access to the reservoir, shore fishing only. Ice fishing is allowed only from Jan. 1 to March 15 and no gas or propane powered augers are allowed on the ice, but electric powered augers may be used. Also, ice anglers are not allowed to use shanties of any kind, including portable units. All anglers must acquire a fishing permit from the City of Troy. The cost is $10. Visit troyny.gov/forms-permits/fishing-permit/ to apply for the permit.

The Tomhannock Reservoir is located in northern Rensselaer County in the town of Pittstown.