Fort Loramie, Ohio — There are a host of fish species that are worth noting when it comes to southwest Ohio’s Lake Loramie. 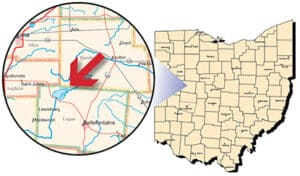 This 843-acre, old canal lake is loaded with bluegills, crappies, saugeyes, channel catfish and largemouth bass, says Mike Porto, a fisheries biologist for the ODNR Division of Wildlife in Xenia.

“It’s one of our old canal lakes, and it was built in the mid-1800s,” he said. “… The south and west ends, the lower part of the lake, is pretty well developed with a lot of homes on it. But, it also has a good amount of fish habitat in that there is lots of lily pad beds and in-water vegetation. Uplake, the lake narrows down quite a bit and there’s a lot of brushy shorelines and downed logs. So, it’s got the best of both worlds, I guess.”

Despite this being an unlimited horsepower lake, it doesn’t get too much recreational pressure, says Kipp Brown, another fisheries biologist in Xenia. That’s probably because of the relative width of the lake and the fact that much of it is a no-wake zone with houses on both sides of the lake.

“It’s (a lake) where you kind of go fast at your own risk,” says Brown. “There are a lot of stumps in there that can be hit.”

“We saw lots of keeper-size fish,” Porto said, adding that there’s no minimum length limit for saugeyes here, but a six-fish daily bag applies. “Lots in the 14- to 18-inch range and the biggest fish we got was a 25-inch fish.”

Anglers should fish for saugeyes during the early summer months by casting or trolling crankbaits. From July through September, use jigs and plastic twister tails tipped with a piece of nightcrawler. A few saugeyes are taken through the ice in typical years by anglers fishing with live minnows or by jigging blade baits.

Mid- to late March is one of the prime times of the year for saugeye fishing at Lake Loramie, particularly at the spillway below the dam, said Porto.

In addition to saugeyes, the long and narrow lake provides good fishing for largemouth bass, crappies, and catfish.

There is a moderately good population of largemouth bass, most in the 10- to 18-inch range but some up to 4 pounds. There’s plenty of shoreline vegetation and boat docks that provide prime forage habitat for bass. It would be a good place for a float trip for largemouth bass anglers casting plugs and spinnerbaits all the way into the shallows on the upstream portion of the lake. There is a statewide bag limit of five bass and a 12-inch minimum that applies here.

“It’s a fairly average bass lake,” Porto said. “ … There are lots of 12- to 15-inchers in Loramie. The lily pad beds, particularly in the spring and summer, are really popular spots to fish for them.”

Crappies, both black and white, are also present in good numbers in the 8- to 10-inch variety. Some slabs go up to 13 or 14 inches, according to netting surveys. This is one of the lakes in Ohio that has a 9-inch keeper requirement and 30-fish daily bag limit.

“Loramie had a really interesting run,” says Brown. “In 2011, it had a (crappie) year class for the ages. We heard from a lot of people who were concerned because they thought the fish were really slow-growing … We netted it, and we saw what everybody else was seeing. But, the fish weren’t slow-growing and stunted, it was just that this one year class was so enormous that it dwarfed everything else in the lake. You couldn’t get through these fish.”

Porto says crappies are a highlight here with quality fish being produced year after year. Fish brushy shoreline areas or newly emerging lily pad areas March through May for the best results.

Channel catfish had been stocked in alternating years but that practice has been discontinued, said Porto. Natural reproduction sustains the catfish population.

“We did a survey a few years back and there’s just an overwhelming amount of catfish in the lake,” Porto said. “We’ve got a lot of natural reproduction going on, so we were stocking catfish on top of catfish.”

The largest fish in a recent catfish netting survey, says Brown, was 26 inches and the catfish ranged up to 24 years old.

“The majority of fish in our survey were 13 to 18 inches long and probably 5 to 15 years old,” he said. “If you want good, eating-size catfish, Loramie would be a great place to go.”

Since Lake Loramie was created in 1844 to provide water storage for the overland canal system, it isn’t very deep, topping off at about 10 feet near the dam on the western end. The average depth everywhere else along the 30 miles of the lake is a meager five feet. It’s also very narrow, measuring about a football field or less in width in many stretches.

Lake Loramie is densely developed along the shoreline with homes and businesses, so the western end of the lake near the dam gets most of the shoreline angling pressure.