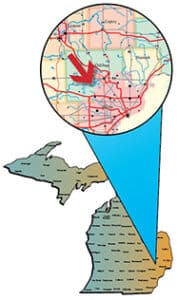 Following persistent reports of stunted bluegills, the DNR began stocking walleyes in Long Lake in 1999 in an effort to crop off some of the stunted ‘gills and to provide an additional recreational fishery. Between 1997 and ‘99 DNR staff also planted redear sunfish to provide anglers with an opportunity to catch larger panfish.

Results of a 2019 survey of the fishery in Long Lake seem to indicate that the program is working.

“The most recent survey conducted to evaluate the impacts of walleye stocking on the Long Lake bluegill population suggests that bluegill size score has improved from 1996 and 2003 to 2019,” wrote DNR fisheries biologist John Bauman in a summary of the 2019 survey. “Additionally, captures of redear sunfish suggest that the population is self-sustaining while providing fish of an attractive size with records of trophy size fish being captured.”

The survey found very strong numbers of bluegills. They ranged between 1 and 8 inches and averaged 5, which is an improvement over prior surveys.

Redear sunfish were found in fair numbers. They ranged between 2 and 10 inches and averaged a respectable 7 inches.

Walleye number in the survey nets were light, but the fish ranged up to 23 inches and averaged 21.7.

“Walleye have been stocked to reduce the number and improve size structure of bluegill. Currently the average size of bluegill captured in trap nets is larger than it has been historically,” Bauman wrote. “However, it is difficult to determine whether this is due specifically to walleye predation given the introduction of a competing panfish, the redear sunfish. Stocked spring fingerling walleye are surviving to adulthood and are providing an attractive fishery for anglers. Therefore, stocking of spring fingerling walleye should continue.”

The DNR’s prescription calls for 65 walleyes per acre, or about 10,140 fingerlings, to be planted every other year. The state planted 15,246 walleye spring fingerlings in 2019 and 4,588 in 2021. Ultimately the final number of stocked fish is determined by availability.

Located in populated central Oakland County, southwest of the town of Union Lake, you might expect Long Lake to get a ton of fishing pressure. Surprisingly, that’s not the case.

Being in close proximity to Union Lake (465 acres), and much smaller at just 156 acres, Long Lake is often overlooked. It’s not unusual to have the lake nearly all to yourself when wetting a line.

Long Lake is a kettle lake located in the Huron River watershed. It’s a shallow lake, having an average depth of around 6 feet and a maximum depth of 12 feet. Over 90% of the lake is less than 10 feet deep. It’s relatively oval in shape running southeast to northwest with minimal breaks and a sandy bottom. The shoreline is almost completely developed with year-round homes.

Much management has taken place on Long Lake over the years including a big dredging project in the early 1960s. Prior to that time the lake had a maximum depth of just 7 feet and an average depth of about 2 feet. Winterkill was common. The bottom was mostly peat and marl.

According to DNR reports, lake-front property owners contracted to have the entire lake dredged at a cost of $185,000. Between 1961 and 1965, a total of 1.1 million cubic yards of bottom material were removed from Long Lake. The lake was re-mapped in 1965 and measured 156 acres, 10 acres larger than before dredging, and it averaged 6.6 feet deep. Sand was the predominant substrate and winterkill no longer occurred.

Largemouth bass, bluegills, yellow perch and muskies were stocked into Long Lake prior to the 1970s.

With persistent reports of stunted bluegills coming from anglers on Long, the DNR decided to treat the lake with antimycin between 1971 and 1973. Aantimycin is a fish toxicant that is applied in the shallows targeting bluegill during the spawn.

Fish surveys in 1988 and 1996 found that the average bluegill size remained poor and they were still growing well below the state average. That’s when biologists decided to stock walleyes and redear sunfish.

In the 2019 survey of the fishery in Long Lake, DNR nets collected 1,795 fish representing 27 species.

Largemouth and smallmouth bass both ranged up to 17 inches and the northern pike to 22.

Public access is available at a DNR site located on the north shore off Cooley Lake Road. The site features a hard-surfaced ramp, courtesy pier, toilets, and parking for up to 15 vehicles.