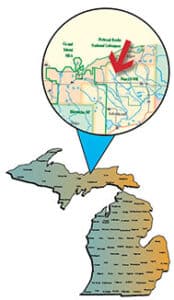 Don’t expect to catch a limit on Gemini Lakes. The fishery is decent, but not great. However if you’re looking for a quiet and secluded fishing trip and a chance to catch a mixed bag of walleye, panfish, pike, and bass, it’s hard to beat Schoolcraft County’s North and South Gemini lakes.

Located in northwest Schoolcraft County about 21 miles northeast of the town of Munising, the two lakes, collectively known as Gemini Lakes, are actually one body of water.

The main public boat ramp is off Twin Lake Road on the east shore in the narrow center of the lake, which separates the north and south basins. The access site is at the North Gemini Lake State Forest Campground, which features parking for three vehicles as well as 17 rustic campsites. There is another carry-down access site at the south end of the lakes at the South Gemini State Forest Campground, which offers another eight rustic camping sites. Camping at both SFCs is available on a first-come, first-served basis. Both rustic campgrounds are suitable for tents and small campers and include vault toilets and potable water from wells with  hand pumps.

Gemini Lakes provide pretty good fishing for walleye, panfish, pike, smallmouth bass and white suckers, but most species are found in light numbers. Most of the species of game fish are growing at or above the state average, resulting in good size structure. A 10-inch Master Angler bluegill was caught in Gemini Lakes on Oct. 17, 2012. Nancy Fierstein of Marquette caught the fish while stillfishing with a nightcrawler.  On July 26, 2016, Milford resident Jeff Nieter caught a 21-inch Master Angler smallmouth bass while spincasting with an artificial worm.

Gemini Lakes sit in a 417-acre watershed and feature 120 acres of surface area. North Gemini is relatively shallow and drops down to just 10 feet at its deepest point. South Gemini is a little deeper, bottoming out at 20 feet. The bay at the south end off the state forest campground is just five feet deep.

The most recent survey of the status of the fishery in Gemini Lakes was conducted by DNR biologists in 2009. The survey found an aesthetically appealing natural lake with just four residences and four docks on the water.

An unnamed stream flows out of the south end of South Gemini and empties into Canoe Lake, which is a tributary to Marsh Creek in the Manistique River watershed.

The bottom of Gemini Lakes is mostly sand and muck with scattered patches of gravel along the shoreline. Aquatic vegetation is scarce and includes water lily, pipewort and wild celery. Woody debris and brush is present along the shore and provides decent fish habitat.

According to a DNR report on the lakes following the most recent survey, Gemini Lakes has a long history of fisheries management. The lake has been surveyed eight times since 1957. Largemouth bass and bluegill were stocked in 1941, but no further stocking occurred until 1992 when DNR biologists began planting walleyes in the lake. That effort continued until 2004 when it was determined that natural reproduction was occurring and sustaining the fishery.

“While the Gemini Lakes provides habitats to support populations of 12 fish species, outside of walleye and perhaps white suckers those population abundances appear to be rather low,” the DNR wrote in the report.

The survey nets also collected light numbers of bluegills to 10 inches, northern pike to 25, smallmouth bass to 15, and a few small pumpkinseed sunfish.

“Panfish such as bluegill have never been very abundant in Gemini Lakes, and the catch sampled in 2009 indicated little change in the population as compared to previous surveys. Age classes 2-6 were captured during the survey indicating some successful but limited natural reproduction on an annual basis. Rock bass up to 8 inches are available to the angler as 75% of the survey catch was comprised of fish 6 inches or longer,” the DNR wrote.

Live bait is the ticket to success when fishing Gemini Lakes. Try working the brush piles and limited weeds along the shoreline with leaf worms, minnows and chunks of crawlers for panfish.

Walleyes will hit crawler harness trolled or drifted along the breaklines in South Gemini. Anglers occasionally pick up a smallmouth bass or northern pike, here, too.

Try dragging a clump of crawlers or worms along the bottom to target the suckers.