Bone Lake muskie numbers down, but size is better 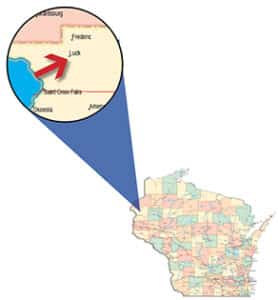 Talk muskie fishing in northwest Wisconsin and Bone Lake is going to be part of that conversation. The DNR has been surveying Bone Lake muskies since at least 1964. The local fisheries team took a look at Bone Lake adult muskies (fish longer than 30 inches) in 2017 and 2018. Because muskies become “net shy” after a visit to a fyke net, DNR teams run muskie surveys in consecutive years to give those big fish time to forget about their previous capture.

The adult population was estimated to be 627 total fish, or 0.35 adult fish per acre. This is the lowest Bone Lake muskie population estimate since 1964, but is still considered a moderate density compared to other Wisconsin muskellunge populations.

Muskie size structure was the highest ever documented in Bone Lake. The improvement in size was the most apparent difference with the Bone Lake population between the 2017-18 survey and previous surveys.

“The greatest size structure increases were observed in the largest size classes, which should be of interest to muskellunge anglers. It is too early to truly evaluate the 50-inch length limit that was implemented in 2011. This increase in size structure could be partly attributed to the 50-inch limit, but likely was more due from the lower adult density and presumably lower levels of exploitation since the 2011-12 survey.”

Cole recommended the muskie fishery be managed at a moderate density with high size structure. The target muskie population level in Bone Lake should be maintained between 0.2 to 0.4 adult fish per acre.

“An adult density within this range should provide a population with high size structure and a density that would offer reasonable catch rates. The alternate year stocking should be reduced from 1.5 large fingerlings per acre every other year to one large fingerling per acre every other year. Bone Lake is on a six-year rotation for muskie population estimates. We will continue to monitor the density, size structure, population demographics, and exploitation of the Bone Lake muskie fishery. Future surveys also will be used to monitor the response of the muskellunge population to the reduction in stocking rate,” Cole wrote.

Bone Lake has long supported a well-known muskellunge fishery that is popular among anglers. Although muskellunge are not native to Bone, the lake has been managed for muskies since 1935, when the then-Wisconsin Conservation Department initially stocked muskies. Muskies are not known to naturally reproduce in Bone Lake.

Bone Lake is currently classified and managed as an A1 muskellunge water, defined by its ability to produce large fish, but the overall muskie abundance there is lower compared to other waters. It was previously managed as an A2 water, a high-density action fishery with low size structure.

Due to the higher stocking rates during the 1980s and 1990s, more restrictive size limits, and the increase in catch-and-release, the Bone Lake became as high as 0.99 adult fish per acre in 1995. The high density provided good angling action for numbers; however, muskie size structure and condition declined when densities were high.

Bone Lake muskies also support winter and spring spearing by the Chippewa tribes under the Voigt decision. The spring spearing is closely regulated with harvest quotas set from the most recent population estimates, so that the risk of exceeding the maximum sustainable exploitation rate of 27% for muskellunge is less than one in 40. The average number of muskies speared each spring has been 10.3; the average allowed has been 18.9. Winter spearing is less regulated. Since the federal court considered winter spearing “inefficient,” no safe allowable harvest quota exists. Harvest is typically not recorded in the winter, and fish are not measured by creel clerks.