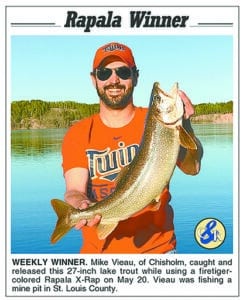 With the opening of Minnesota’s fishing season May 15 begins another season of the Rapala Weekly Photo Contest in Outdoor News, one of the most well-read outdoor publications in the state covering fishing, hunting, and other outdoor activities.

This year is extra special, as Outdoor News and Rapala USA celebrate the 50th anniversary of both the contest and the long partnership between two organizations. The weekly photo contest may quite possibly be one of the longest-running contests in the world of recreational fishing.

Each week, on its front page, from May through mid-September, Outdoor News publishes the photo of an angler, submitted to the publication, beaming with pride as he or she holds up a fish caught with a Rapala fishing lure. Under the photo, a caption shares the name of the angler and hometown, and usually which Rapala lure was used to catch the fish in the photo. If the angler released the fish, a banner across the corner of the photo says, “Catch and Release.” 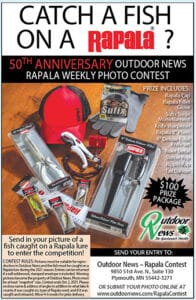 The contest, called the Outdoor News-Rapala Weekly Photo Contest, began in 1971 when one of the co-owners of Normark Corp., the Minnesota-based company that distributed Rapala lures across the United States and Canada at the time, approached the original owner, Jim Peterson, a former long-time sportswriter for the Minneapolis Star and Tribune newspapers, who had started Outdoor News in 1968.

“As I was told, it took some convincing for Jim to do the contest,” said Glenn Meyer, the publisher and owner of Outdoor News, who purchased the publication from Peterson in 1987. “But eventually, Ray Ostrom, one of Normark’s co-owners, convinced him it would be good for his readership, and, of course, good for Rapala lures.”

When Meyer took over the reins of Outdoor News, he knew he wanted to continue the contest tradition, and over the years, the publication expanded it, in partnership with Rapala, to other state editions. Today, the Outdoor News-Rapala Weekly Photo Contest also appears in the Wisconsin, Michigan, Pennsylvania, New York, Illinois, and Ohio print editions of Outdoor News, as well as through the publication’s website and social media.

“I was a long-time subscriber to Outdoor News,” Meyer said. “I loved the contest and knew that it was important to continue it because it creates great interaction with our readers.”

“We are proud of this long-standing tradition and partnership with Outdoor News,” said Matt Jensen, director of marketing for Rapala USA, “Online and through their newspapers, it allows us to connect the Rapala brand with everyday folks of all generations who love fishing. Part of its charm is its multi-generational connection with families. There are a lot of proud grandpas who submit photos of their grandkids to our contest. Year in and year out, it’s been one of our most successful promotions.”

Meyer has noticed how the photos submitted in the contest reflect the changes happening in fishing.

“As catch and release started to catch on, our readers would write that they caught and released the fish that was photographed,” Meyer said. “We don’t print images with stringers of fish, and we see more photos of women and kids and people of color. But what’s common to nearly every photo is a big smile of pride.”

Eric Meyer, photo manager for Outdoor News, who has been judging the contest for the past 32 years, says more than 4,000 people have won the contest’s prize, typically a selection of Rapala lures, a Rapala fillet knife, and other assorted goodies. Over the years, the publication has received more than 30,000 entries that have appeared in the newspapers.

The fish most likely to be photographed include walleyes, northern pike, and largemouth and smallmouth bass. And as for which lure has caught the most fish, it’s a toss-up between the Original Floating Rapala and the Rapala Shad Rap, two of the world’s most popular-selling fishing lures.

“As you look through the photos that have been submitted over the years,” Eric Meyer said, “you also notice how anglers became better at composing their photos. The quality of the photos has improved dramatically, too, as we shifted from receiving printed, mailed photos to high-resolution digital images taken on via smartphone cameras.”

Glenn Meyer thinks the contest played a role in shaping how anglers care for fishing resources.

“We didn’t preach about catch and release. We let the photos tell the story,” Meyer said. “I think that’s why fishing in Minnesota has never been better. These are the good ol’ days now.”

At the end of the day, the contest is all about memories, he said.

“There’s still something special about seeing your photo in a newspaper, holding up a fish. I’m proud that we’ve created a lot of memories for families across our country.”

Caught a fish on a Rapala? Enter the 50th anniversary of the Outdoor News-Rapala Weekly Photo Contest. See details at lower left or enter now at www.outdoornews.com/submit-a-photo/