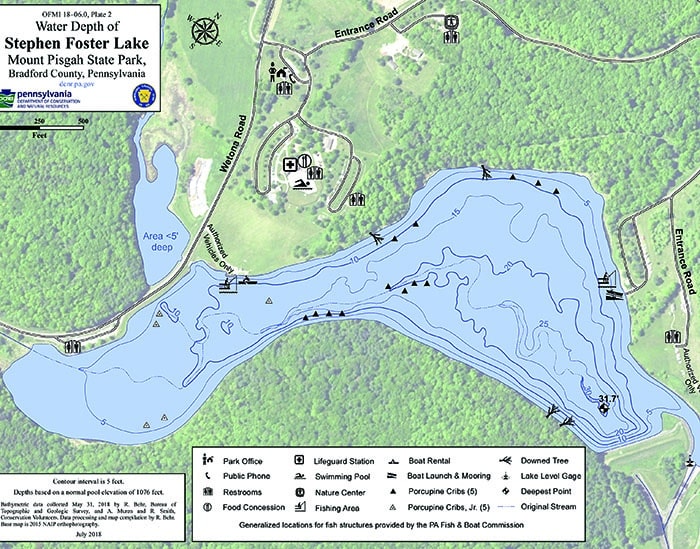 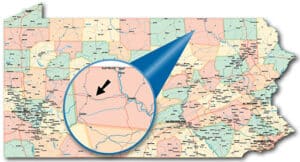 Whenever a lake is first built – or drawn down, dredged and restored – it’s a bit of a clean slate. And the emphasis is on clean. Before silt and sludge cake its bottom, such a lake is rich in nutrients and aquatic life. The result is an explosion in fish populations that can last anywhere from five to 10 years.

Anglers won’t necessarily experience that at Stephen Foster Lake in Bradford County. The 75-acre lake that serves as the centerpiece of Mount Pisgah State Park near Troy has been around for a while.

But not all that long, comparatively speaking.

Valley Forge was Pennsylvania’s first and for the longest time oldest state park. The commonwealth bought the Montgomery County site in 1893 to commemorate the spot when George Washington and his army spent the winter of 1777-78.

It was ultimately transferred to the federal government and became a National Historic Park in 1976, though.

That leaves Mont Alto State Park in Franklin County as the oldest Pennsylvania state park. It was established in 1902.

By comparison, the land that would become Mount Pisgah State Park wasn’t purchased until 1969. Stephen Foster Lake wasn’t completed until 1977, and the park wasn’t officially dedicated until 1979.

That undoubtedly makes it younger than some of the anglers who will fish it this year.

But fish it they should. Stephen Foster Lake offers some real angling potential.

In particular, fishermen who like to target panfish in spring will find this lake a really nice alternative. Stephen Foster Lake is home to crappies – mostly if not exclusively black crappies – bluegills, yellow perch and bullhead catfish.

Those fish tend to grow large on average, too.

The Pennsylvania Fish & Boat Commission maintains a list of “best fishing waters” around the state. It’s broken down by species, and identifies waters where anglers can reasonably expect to catch good numbers of large fish.

Stephen Foster Lake makes the cut when it comes to yellow perch. It’s one of just nine lakes statewide of between 50 and 500 acres to be so recognized.

Surveys done at the lake have turned up perch in the 14-inch category. There are more than just a few, too. Unlike in some inland lakes, where yellow perch are a niche species among panfish, at Stephen Foster Lake they’re nearly as common as crappies.

That’s something a little different for most people.

The lake’s crappies get big, too. Fish & Boat Commission surveys found fish up to almost 14 inches. Some of the lake’s best bluegills exceeded 8 inches – 7 inches is the commission’s standard for a good ‘gill – while its better brown bullheads stretched almost 18 inches the last time the commission looked.

Those are some pretty healthy panfish.

Still, if that doesn’t do it for you, Stephen Foster Lake also holds some impressive largemouth bass. When commission biologists last looked at it in 2016, they found what they termed “a very impressive population.”

Some of the bass were indeed very nice. The longest stretched almost 22 inches.

And that’s not just old information.

Angler reports from Stephen Foster Lake over the past few summers suggest there are plenty of largemouth bass still there. Bass in the 12- to 15-inch range are still common, with the occasional bigger fish mixed in.

The state park and Fish & Boat Commission have worked jointly to make that fishing as good as it is. And they offer anglers clues on where to get in on the action.

Stephen Foster Lake is about 31 feet deep at its deepest. Some of the better fishing, though, especially seasonally in spring, is in the shallows.

The park and commission felled trees along the shoreline in some places to provide spawning habitat. They sunk porcupine cribs and junior cribs in 5 to 10 feet of water in other places around the lake. All draw fish.

WHAT YOU SHOULD KNOW: The park has a boat launch on the lake’s north shore. Shore access is good.

The Oh Susanna Trail, the lake is named for the famous composer who once lived nearby, takes you around much of the lake.