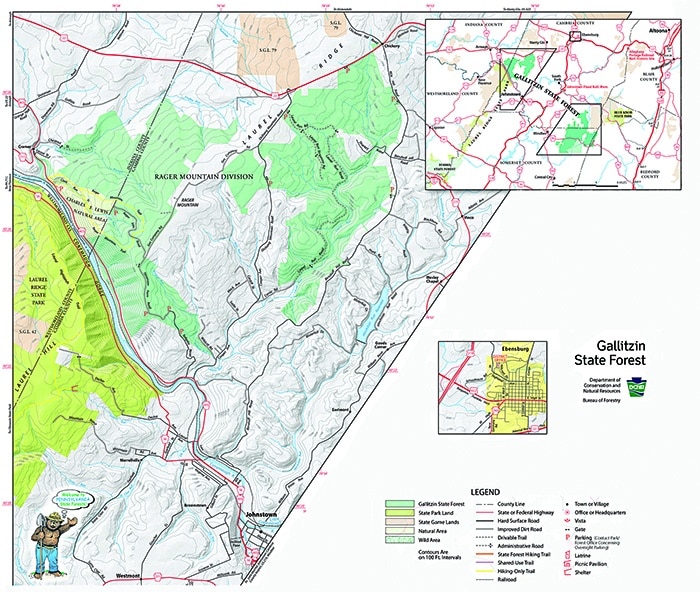 The Rager Mountain Division of the Gallitzin State Forest is a great trout-fishing destination that offers five streams where special days can be experienced.

The Rager Mountain Division is located in Indiana and Cambria counties. This land is heavily forested and mountainous; much of the terrain easily exceeds 2,200 feet above sea level.

Two similarly sized parcels, which are less than a mile apart from each other, offer fishing opportunities. Together, these two properties are comprised of roughly 7,500 acres.

On the tract that is slightly larger and extends farther east, Laurel Run and an untitled tributary are worth targeting. On the expanse that extends farther west, Findley Run, Risinger Run and Wildcat Run truly shine. These streams belong to the Conemaugh River Watershed and each one has a very fishable wild trout population.

For over four miles, Laurel Run is a continuous part of the Rager Mountain Division. The vast majority of this section provides fine action from wild brook trout.

Steep valley walls closely line much of the stream, which exits the state forest three quarters of a mile from the community of West Taylor.

Approximately a quarter mile after entering public land, Laurel Run grows considerably and begins descending sharply. For the next half mile or so, the stream is part of a scenic, tumbling stretch that features boulders, plunge pools and rock formations.

Shortly after flowing through a powerline run, Laurel Run mellows and levels out. The creek then sustains a rather gentle gradient for an extensive distance. Undercut banks, abrupt bends, log jams and small, deep pockets become commonplace. Also, spots that exceed 40 feet across can be fished.

While fishing Laurel Run in the Rager Mountain Division, a fun-filled day catching wild brookies is possible. Though the entire creek is classified as a Stocked Trout Water, it is rare to catch a stockie in the state forest. I did encounter two last year, however, and I was thrilled.

The aforementioned untitled tributary courses along in a densely shaded mountain hollow. Not far from Laurel Run, it is crossed by Laurel Run Road, a gated administrative road. An impressive trout population exists in this nameless stream that can provide a memorable outing.

Last year, I hooked some unusually thick brookies here that truly stood out. It seems like once trout reach around 8 inches in this stream, they get remarkably robust.

At a parking site off Dishong Mountain Road, Laurel Run Road begins and can be used for hiking. Within an hour and 15 minutes of passing by the gate, either Laurel Run or the untitled tributary can be fished.

About a mile from Route 403, there is a parking lot off Tollgate Road. A nearby bulletin board marks the location of an old road that can be accessed on foot. After a 10- minute descent, Wildcat Run can be heard from the passage.

In the state forest, approximately a mile and a half of Wildcat holds trout year-round. The stream harbors a tremendous brook trout population, plus certain pools exist that are chock-full of fish.

Huge, eye-catching pools are numerous and highlight the scenery.

From here, it takes about 10 minutes to arrive at Findley Run by way of some mild trailblazing. This lot can also be a starting point for accessing Risinger Run.

In this area, Findley Run flows in the state forest for nearly a mile and a half and offers both brook and brown trout. A little past the halfway mark of this section, Risinger Run joins the flow.

This part of Findley is aesthetically rocky and exudes power when the banks are full of water. Excellent action can be experienced here and it’s possible to latch onto a really nice wild trout.

Risinger Run is a very remote fishery. However, with a little mild research and some methodical hiking, a first-time visit to the stream can be accomplished with a minimal amount of trailblazing.

About a mile upstream from the mouth, Risinger’s existence as an intermittent stream ends and a teeming trout population begins. Nine-inch brookies occasionally turn up and typically come from deep spots with exceptional cover.

About a half mile downstream from the previously described part of Findley Run, a smaller segment of the creek flows publicly. This section is just a third of a mile long, but it should not be overlooked.

About 350 yards from Locust Street, there is a roomy pull-off along 403. From here, the shorter section can be reached in five minutes.

This is a brown trout fishery that ranges from 15 to 35 feet wide. At least six sizable pools stand out and enticing looking spots abound. Brownies under 9 inches are abundant and thick, 13-inch beauties can be caught.

In the area where the Rager Mountain Division is located, U.S. Route 22 is the principle artery. Within eight miles of 22, seven key places to park can be utilized by visiting anglers.

At the Rager Mountain Division of the Gallitzin State Forest, anglers can enjoy fishing and exploring five top-quality streams while appreciating scenery that can’t be ignored.

WHAT YOU SHOULD KNOW: The Gallitzin State Forest was named in honor of Dimetrius Augustine Gallitzin, Prince-Priest of the Alleghenies, who established a mission at Loretto in Cambria County.