With a special reg, Franklin’s panfish are in mint condition 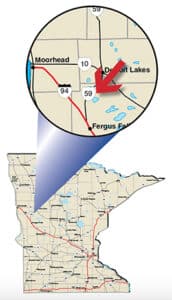 Otter Tail County’s Franklin Lake has a long history of producing quality panfish. But its reputation for kicking out lots of good-sized bluegills and crappies also means there’s a history of heavy fishing pressure for those fish.

That intense pressure appears to have taken a toll on the quality of panfish anglers were catching on this 1,336-acre lake northeast of Pelican Rapids. As a result, several regulations were implemented aimed at maintaining the size structure of Franklin’s panfish.

The bag limit for both crappies and bluegills was reduced to five fish in 2006. Along with that, a 10-inch minimum length limit to keep crappies was introduced. These changes seem to not only be maintaining a quality size structure, but also improving it.

“Franklin is a great panfish lake with excellent bluegill and crappie habitat,” said Jim Wolters, DNR Fisheries supervisor in Fergus Falls. “The lake still gets a lot of pressure for both, but (anglers) catch really nice panfish.”

The DNR surveyed Franklin in 2016 and again last summer. In the earlier survey, nearly 40% of the bluegills sampled were 7 inches or longer, and 97% of the crappies in spring trap nets were 10 inches or longer.

While overall bluegill numbers were down during last summer’s survey, their size had continued to improve. There was no spring crappie assessment in 2020, but three solid year-classes were sampled in summer nets.

“The bluegill size structure has shifted. We saw bluegills approaching 9 inches last summer,” Wolters said. “Without a spring assessment, it’s tough to accurately sample crappies, but their size structure was very good in the past, and it’s safe to say that would still be the case.”

Gill nets produced an average of five walleyes per lift last summer, down from nine per net in 2016. But 2016 included the highest number of walleyes sampled since 2003.

The 2018 walleye year-class is strong, and those fish are now just over 9 inches in length. In addition, seven consecutive year-classes – 2013 through 2019 – showed up in last summer’s survey.

“While there’s past evidence of natural reproduction, stocking efforts are maintaining walleye numbers,” Wolters said. “Five (walleyes) per net is a healthy number for this type of fishery.”

Franklin tends to be most productive for walleye anglers in the spring and fall. There are excellent drop-offs, weedbeds, and points to work throughout the lake.

Largemouth bass are good-sized and numerous in Franklin. They benefit from the same type of quality habitat that the lake’s panfish utilize.

Smallmouth bass showed up for the first time in Franklin during the DNR’s 2016 survey. Smallie numbers are limited, but an abundance of shoreline rock and gravel provides excellent smallmouth habitat.

There’s also a small creek that connects Franklin to Crystal Lake, which has a good smallmouth bass population, so it’s possible that’s their origin.

“It’s a good lake for largemouth bass and, who knows, smallmouths might thrive in there one day,” Wolters added.

Northern pike numbers in Franklin are trending downward from historically high levels. Gill nets averaged 22 pike per lift in 2012 and just four per net in 2020.

Despite the reduction in pike abundance, their size structure continues to run on the small side. Wolters hopes that with fewer pike in the system, he’ll eventually see an improvement in their size as well.