It’s no secret: Victoria is a great panfish, bass lake 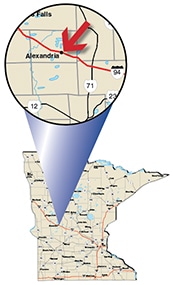 There are six lakes that make up the Alexandria Chain of Lakes in Douglas County. These are well-known fisheries and highly regarded among anglers for their excellent panfish-, largemouth bass-, and walleye-fishing opportunities.

Lake Victoria is the southern-most basin in the chain and the second smallest at just 416 acres. Its unique horseshoe shape and skinny body from shoreline to shoreline mean Victoria is almost always manageable for anglers, even when stiff winds keep boaters off bigger lakes.

But Victoria poses some obstacles for anglers. From a structure standpoint, it’s pretty much a featureless lake that includes sharp shoreline breaks, limited shallow water, and increased water clarity because zebra mussels have infested the lake.

“Water clarity throughout the entire chain has almost doubled in the last 10 to 20 years,” said Chris Uphoff, DNR Fisheries specialist in Glenwood. “Victoria has its challenges, but it’s a pretty good bass/panfish lake and a decent walleye fishery.”

The DNR surveyed Lake Victoria last June, and it showed a strong year-class of 4-year-old crappies that are now 10 to 11 inches in length. Compared with past surveys, there also were better numbers of bluegills from 7 to 9 inches long.

These fish tend to grow fast in Victoria, but often are tough to find by anglers. Depending on the time of year, the lake’s limited shallow vegetation and the increasing amount of deep weeds on the north end of the lake along Highway 27 present likely places to find them.

Andrew Brinkman, of Christopherson’s Bait and Tackle in Alexandria, pointed out that the lake’s lack of traditional panfish-holding structure doesn’t mean there aren’t quality crappies and bluegills to be caught in Victoria.

“There’s a lot of 7- to 9-inch crappies and good numbers of 10- to 11-inch fish. We hear about people catching pretty nice crappies out there,” Brinkman said. “Bluegills are numerous, and if you work at them, you can put together a batch of decent fish.”

The entire chain, including Victoria, is noted for its largemouth bass population. The lake’s bass grow fast, and last summer’s survey showed an abundance of fish from 14 to 16 inches in length, with some larger bass in the mix.

It’s worth noting that in the DNR’s previous survey, conducted in 2016, the majority of largemouth bass sampled were between 10 and 12 inches long.

“Victoria has nice bass, and I think both their numbers and size have improved in recent years,” Brinkman said.

Despite being stocked with walleye fingerlings annually through a cooperative agreement between the DNR, local sportsmen club, and lake association, Victoria’s walleye population has remained stagnant, if not in decline in recent years.

According to Uphoff, the lake’s increased water clarity is likely the main reason walleye numbers have not increased. Even with the high number of fingerlings stocked in Victoria,   the addition of zebra mussels might be too much to overcome.

“It’s a decent walleye fishery, but it’s down from years ago, prior to zebra mussels,” he said. “The stocked fish just don’t seem to take with that clear water. The fish in there are nice-sized, but it doesn’t have the numbers we’d like to see.”

Brinkman says the clear water also plays a role in anglers’ ability to catch walleyes. He suggests focusing efforts at night, during low-light periods, and when it’s windy or overcast.

There’s a fishing pier near the access that’s worth a mention. It allows shore anglers to reach deep water and catch walleyes, panfish, and northern pike.

“It drops like a wall and people have good luck on it,” Brinkman said of the pier.