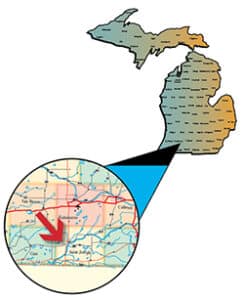 If a plate of panfish seems like a tantalizing meal, Lake Pleasant might be just what the doctor ordered. There are no walleyes or trout in this relatively small lake, but it’s chock-full of tasty bluegills, perch, sunfish, and crappies.

This 262-acre inland lake is a natural, spring-fed lake. There are no inlets, and the lone outlet is in the southwest corner and flows into Little Pleasant Lake.

The lake features two basins. The west basin has a maximum depth of 48 feet, and the larger west basin bottoms out at 53 feet.

Submerged, floating, and emergent vegetation is present, but the best fish structure consists of the bars, flats, drop-offs, and points, which are abundant throughout the lake.

Fisheries management on Pleasant Lake dates back to 1887 when the Michigan Fish Commission first surveyed the lake with gill nets. Largemouth bass, bluegills, yellow perch, and ciscoes were found in the initial survey and are still present today.

According to a report by Unit Fishery Manager Brian Gunderman following the most recent survey of the lake,  bluegills, largemouth bass, and yellow perch were stocked in Pleasant Lake in the 1930s and 1940s.

Those efforts were discontinued in 1945 because of the ineffectiveness of stocking fish on top of naturally reproducing populations.

Rainbow trout were stocked between 1949 and 1995, but that program was discontinued because of sporadic results and lack of angler interest.

Walleyes were introduced in 1978 and were stocked at various levels through 1995. But again, the program ended due to limited success.

Overall, the fishery has not changed much over the years, despite numerous attempts by fisheries managers to introduce different game fish into the lake.

The most recent survey of the status of the fishery in Pleasant Lake turned up an impressive panfish fishery with good numbers and sizes of bluegills, yellow perch, pumpkinseed sunfish, and black crappies.

Bluegills made up 36% of the catch by number. They ranged in size between 1 and 8 inches, featured eight year-classes, and 56% were 6 inches or longer, which is considered acceptable size for anglers.

The survey also found good numbers of yellow perch ranging between 5 and 12 inches, with 89% measuring 7 inches or larger.

Pleasant Lake has had a reputation for hosting a stunted largemouth bass population over the years. In a 1996 survey of the fishery, only 1% of the largemouths were legal sized (14 inches or larger).

“The current 10-inch minimum size limit for largemouth bass on Pleasant Lake has accomplished two objectives,” Gunderman wrote in his report. “It has increased largemouth bass harvest opportunities, and it has resulted in an increase in abundance of bass that are 14 inches or larger.

“Based on anecdotal reports and comments at public meetings, the existing minimum size limit has broad acceptance among anglers. No regulation changes are proposed at this time.”

Good numbers of largemouth bass were collected in the most recent survey and a few ranged up to 21 inches. Just 15%, however, were 14 inches or larger.

The survey also found light numbers of northern pike to 30 inches, spotted gar to 32, and longnose gar to 44.

No ciscoes were found in the most recent survey, but that didn’t surprise Gunderman.

“The timing of the survey was not optimal for capturing this species,” he wrote.

The southwest corner of the lake near the public access site is a good place to start searching for bluegills and sunfish. Wax worms and crickets are deadly for Pleasant Lake ’gills.

Small coves at the west end of the lake also hold decent populations of panfish. Two humps at the north end of the lake, and the shallow flats along the south shore east of the boat launch, are hot spots in the spring.

During the winter, anglers use tiny teardrop jigs tipped with a wax worm, spike, or wiggler on ’gills and ’seeds.

Perch anglers target the deeper water with wigglers and small minnows. Savvy anglers add a red bead to their offerings.

Try the deep holes at the southwest  end of the lake and in the middle of the main-lake basin for yellowbellies.

The lone public access site on Pleasant Lake is located on the southwest corner of the lake off Fishing Site Drive. It features a concrete ramp and parking for 10 vehicles and trailers.