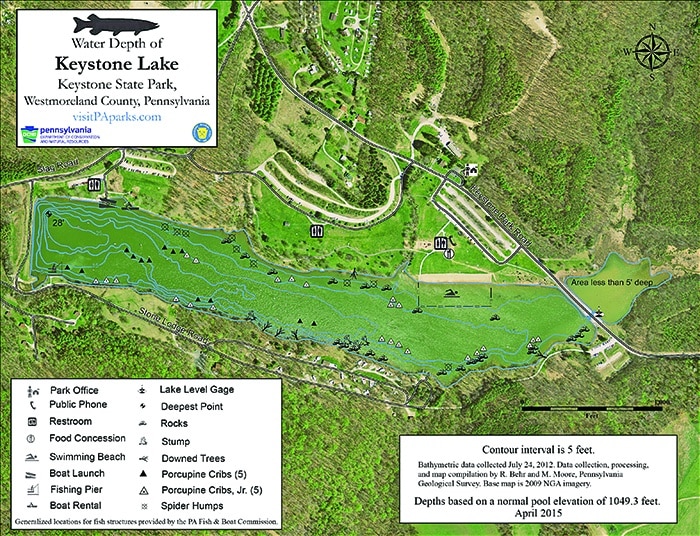 Keystone Lake has much more than trout to offer 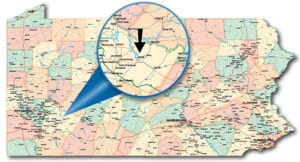 Visit a gym any time in the first week of January and you expect to encounter a crowd, many dressed in brand new clothing that’s never yet soaked up its first drop of sweat.

That’s usually not the case in March, or May or certainly July.

The benefits of getting regular exercise haven’t changed by then. But with the enthusiasm behind New Year’s resolutions having waned, people go back to old habits.

Surprisingly, that’s sort of how things are with Keystone Lake. The waterway serves as the 78-acre centerpiece of Keystone State Park, which is located north of Latrobe in Westmoreland County.

In early spring, the lake gets lots of attention from trout anglers, for two reasons. First, it gets stocked each year in mid-October and many of those fish hold over. Second, the lake is open to year-round fishing.

So what happens is fishermen typically turn out in decent numbers to target them right about now, or even sooner if the weather turns mild.

This is definitely a good time to fish the lake. Trout anglers do well on the usual live baits and artificials, with the best shore access available near the dam breast – the deepest part of the lake at 25 feet or more – and along the south shore that’s home to the lakeside campground.

There’s a handicapped accessible fishing area near the dam, as well.

And then … well, it’s not exactly crickets. But fishing pressure falls off.

You wouldn’t necessarily know that to visit the lake on a summer weekend. The parking lots probably will be full, and the lake will be covered by boats.

But typically, most of those are pleasure boaters. Keystone – which managers there themselves describe as a “gateway” park, or one heavily used by people relatively new to the outdoors – draws big crowds of people in kayaks and canoes and on stand-up paddleboards.

You’ll encounter a bunch of them at the main boat launch near the dam, which is also where the boat concession is located. A few more enter the water from a carry-in canoe launch on the other end of the lake, near the beach.

A good guess is that, on any given day, maybe 20 percent of boaters are also actually fishing.

Whether that’s good or bad depends on your view of competition.

If you don’t mind wandering among a maze of other people to chase some pretty nice warmwater species, Keystone Lake is definitely worth trying. Because it’s really a pretty good fishery.

Its largemouth bass population in particular stands out.

The Pennsylvania Fish & Boat Commission manages Keystone Lake under “big bass” regulations. That limits harvest to three fish per day, all of which must be at least 15 inches long.

The idea there is to increase the number of fish over 12 and 15 inches and optimize fishing.

That seems to be working at Keystone. Commission biologists have sampled the bass population there several times over the years, most recently in 2017. They found about as many bass overall as they did in their previous survey in 2009.

But the number of bass exceeding 12 inches and exceeding 15 both quadrupled in that time. More than one of every four bass was 12 inches or longer, with the biggest bass they handled hitting 20 inches.

Crappies – both blacks and whites, with the latter about twice as common – are another highlight at Keystone Lake. Better than one out of every three seen by biologists was longer than 9 inches, and more than a few stretched 11 to 14.

That population is seemingly still doing well. Some locals regularly target crappies at Keystone, using minnows and jig baits around the downed trees that park officials dropped into the lake for habitat.

Bluegills and, to a lesser degree, yellow perch can be caught from Keystone Lake, too. Bluegills are in fact the most abundant game species in Keystone.

But both the bluegills and perch tend to run small. Biologists say that’s likely the result of competition with gizzard shad, which somehow made their way into the lake a little more than a decade ago.

There is, though, a bright side to that.

In an attempt to control those shad, the Fish & Boat Commission has stocked Keystone Lake with tiger muskies for several years.

Now, does that mean they are superabundant there? No. Few diehard muskie anglers would probably target Keystone Lake for those fish, given its size and potential.

But there are tiger muskies surviving in the lake, and they represent the chance to hook into an occasional trophy.

Catfish fans should know that bullheads reside in Keystone Lake, too. Most are browns, with a few yellow bullheads mixed in.

Like the muskies, they are not overly plentiful. But those that are there tend to be nice. Eighty-five percent of those handled in that 2017 survey were longer than 12 inches – good for taking home to eat – and more than a few went as long as 15.

You won’t be casting for those or any fish in solitude. But chances are you won’t encounter as much competition as you might think either, especially once we get past the rush of trout season.

Keystone State Park’s physical address is 1150 Keystone Park Road, Derry. To get there from Latrobe, follow Route 981 north for about 4.5 miles. Turn right onto Slag Road and follow that into the park.

WHAT YOU SHOULD KNOW: The lake is open to year-round fishing.

It is stocked with trout in mid-October each year.

The lake is managed under “big bass” regulations. Harvest is limited to three fish per day, at least 15 inches long.

HOW TO GET THERE: From Latrobe, follow Route 981 north about 4.5 miles. Turn right onto Slag Road and follow into park.