Burr Oak Lake is one of finest bass spots 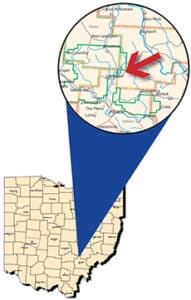 Glouster, Ohio — If in the cool of the spring you find yourself looking for a small, quiet spot to wet a line, you could do worse than Burr Oak Lake.

The 628-acre reservoir built in 1952 sits in a picturesque setting among the rolling hills of southeastern Ohio. The quiet comes about because of very little pressure from recreational boaters and anglers. Boat motors are limited to 10 horsepower with a no-wake, idle-only provision for larger motors. Ohio law classifies “no wake” as the slowest possible speed needed to maintain steerage and maneuverability of a boat. Boats with motors of 10 horsepower or less may be operated on the lake normally.

But, what Burr Oak is best known as is a fairly decent bass lake, said Don Swatzel, a fisheries biologist for the ODNR Division of Wildlife in Athens. There’s a protected slot on largemouth and smallmouth bass at Burr Oak from 12 to 15 inches, which means those fish have to be released when caught.

“This regulation was first enacted at this lake in 1988 and the largemouth bass population has shown a slow but steady improvement in the number of bass available to anglers,” Swatzel said. “Total numbers of bass, how fast bass grow, and average length of bass have all shown improvement under this regulation.”

An electrofishing survey conducted in the spring of 2019 showed that Burr Oak still supports one of the best bass fisheries in the district, Swatzel said, with good densities and a good percentage of bass over 15 inches.

In the heat of the summer, anglers have better luck fishing for bass at night in Burr Oak. It also helps that the lake has been the recipient of significant habitat work to create more fish structure.

Over the past decade and a half, thousands of Christmas trees have been sunk to the bottom of the lake to provide much needed structure for bass and panfish. Trees along the shoreline have also been felled in many areas and those are marked by orange dots on the remaining trees along the banks. The DNR fisheries unit has also installed more permanent structures in the lake, including square cribs made of cedar logs, stake buckets, and triangular structures made from recycled wooden pallets, all of which are designed as fish attractors. For a map of the structure, contact the Division of Wildlife’s District Four office in Athens at 740-589-9930.

Bluegills can be caught by the bucketful but they run small, typically in the 4- to 5-inch range.

“Bluegills and redear sunfish continue to run below average in size, however their population numbers remain high,” Swatzel said. “Burr Oak is a good place to keep youth anglers busy catching the numerous sunfish for an enjoyable outing.”

Muskellunge were introduced to the lake in the early 1990s but the stocking program ended in 1994.

Saugeyes were stocked from 1988 to 2005 but that program, too, has been discontinued due to poor recruitment.

Channel catfish have been stocked here since the mid- to late 1990s.

The crappie population is just decent at Burr Oak, but some large specimens invariably turn up every year.

“The past five years of trap net surveys continue to show below average numbers of crappies available to anglers,” Swatzel said. “Even though fish management personnel haven’t seen great numbers of larger crappies in survey results, there have been plenty of angler reports of larger crappies being caught. One possible reason could be a recent fish habitat improvement project that took place in the spring of 2020. During January of 2020, ODNR employees collected discarded Christmas trees and moved them to Burr Oak for placement as fish habitat. The pandemic delayed the placement of this habitat improvement until much later than usual. Burr Oak anglers, fishing late spring 2020, got to see firsthand the process of placement and locations of the eight structure piles. Many anglers relayed to fish management employees of improved catches while targeting these structure piles.”

There are four boat ramps available for use. There are seasonal boat rentals available at Dock One and Dock Four where the marinas also have good lighting and restroom facilities.

Burr Oak Lake is located in a state park of the same name. Visitors may stay in the park’s 60-room lodge or sleep under the stars at one of the park’s 90 primitive campsites. There are hunting zones around the lake that hold deer and turkeys and Burr Oak is also surrounded by Wayne National Forest. The closest big towns in the area are Athens and Nelsonville.

There is also a fair bit of mushroom hunting that goes on in the region, according to the Division of Widllife.