Home » Newsletter » If you build it, an ice road, they will come.

If you build it, an ice road, they will come. 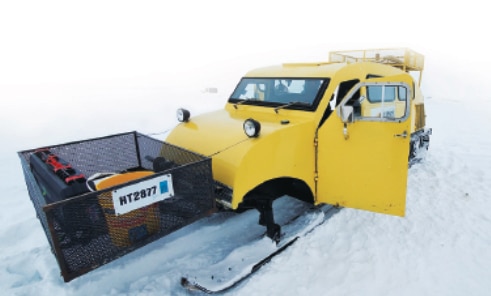 The extra stretch of miles and a double border crossing have always been enough to keep me from Minnesota’s “other” corner of Lake of the Woods, the land mass known as the Northwest Angle.

But now, I’ll add the 22-mile Northwest Angle Guest Ice Road, which opened in January, to the list of things I wouldn’t have experienced were it not for the pandemic. The road, after all, was conceived only because of the closed Canada border, which cut off and isolated the Manitoba land-locked Angle from vehicle traffic. The resort owners and operators there haven’t seen vehicle traffic since early in 2020.

While snowmobile trails have long offered access to the Angle, this is the first time an ice road has been created and maintained to allow standard vehicle access. But how long will the road will remain open this winter?

“Depends on the weather,” said ChiChi Lundsten, co-owner of the Sportsman’s Oak Island Lodge on Oak Island, at the Angle. “Hopefully it will last into March.”

While the angling at Minnesota’s southern basins of Lake of the Woods have always scratched my icy itch for schools of walleyes, the Angle offered a different flavor to a favorite lake.

And it took less than a couple of days to realize – a couple of hours, maybe – that the extra travel time was worth it.

Unlike the resorts on the southern basin that offer a wide array of angling services, from ice road access to wheelhouses and day-use houses to vehicle access, the eight fishing resorts that operate during the winter at the Angle taxi guests around to the various spots with a fleet of bombardiers.

Instead of concentrations of anglers and fish houses along ice roads, this was a much less crowded venture, with sometimes small pods of fish houses grouped in one spot with maybe a central outhouse.

Instead of a generally flatter lake bottom, there is a lot of structure around the islands at the Angle, and there is said to be the likelihood of catching a wider range of fish species, although in a couple of days of fishing, only a single tullibee broke up the catching of mostly walleyes and a few sauger.

It all started – after a six-hour drive to Warroad – with a 22-mile jaunt on the guest ice road, departing from the landing at Springsteel Resort, which requires purchase ($10) of its day pass for its road that is normally about eight miles long. A round-trip pass for the main road is $120 or $145, the latter if you’re driving out to the island resorts of the Angle. The main ice road ends on the southern side and the western border of the Angle, at the Border Cut snowmobile trail. The trail runs along the border with Manitoba on the west and Minnesota and mostly Red Lake Indian Reservation lands on the east.

The path, described as somewhat of a “neutral zone” by one Angle resort employee who helped work on the road, was widened this year to accommodate vehicles. The fresh cut down the straight path along the border, surrounded by pines, was scenic.

That part of the journey lasts about eight miles, with several international markers along the way, until you reach the main road that brings in traffic from Manitoba, then another 12 miles or so before you reach Young’s Bay Resort. Then it’s another eight miles on the ice before you get to the concentration of resorts on Flag and Oak islands. From Springsteel, the drive took about 140 minutes.

SUVs and trucks were outnumbered by other modes of transportation (snowmobiles, side-by-sides, bombardiers, and a float plane) when we pulled up to Sunset Lodge, which first appeared from the ice as a boreal oasis.

My friend Jeff Webb and I unloaded our bags into a cozy unit inside a condo building and met Scott Kempenich, who helped us load our fishing gear into his big, yellow bomber. We shot off down on a trail that offers access to the east side of Oak Island, where Sportsman’s Lodge and Angle Inn Lodge are located. Sunset co-owner Travis Palmquist ran up to the bomber, equipped with skis up front and tracks in the back, and shoved its front end, helping the vehicle make a sharp turn.

“I wouldn’t have been able to make that turn,” Kempenich said as he headed onto the ice of Bobbies Bay. “Now we won’t lose power and sink in the slush.”

We were dropped off in a fish house that had a pair of benches at opposite ends and a heater. None of the resorts at the Angle offer sleeper fish houses. The fishing pretty much slows down after dark anyway, as we found out, but not before we pulled in a dozen walleyes and sauger.

Those fish included the nicest walleye of the trip, one between about 22 and 23 inches.

We had a few of those fish as an appetizer back at the lodge that evening, where most people were taking part in a resort meal plan.

That works out well for folks who are limited in what they can bring with them. Many of the resort guests travel there by snowmobile, departing from Baudette, Rocky Point, or Warroad. Guests also can get there by plane, come by bombardier – or the new ice road.

“Before the ice road opened, we made 40 trips (to pick up guests),” said Palmquist, who noted that Sunset’s bomber service is popular in normal years for resort guests who are not able to cross the Canada border.

Gregg Hennum, owner of Sportsman’s Lodge in Baudette and operator of Lake of the Woods Passenger Service, also runs a bomber service to the Angle, delivering guests to any of the Angle resorts. But the ice road has helped the resorts, for sure.

“It was a community effort for sure,” Lundsten said. “With the border being closed, a lot of resorts have relied solely on that road to get guests.”

Kempenich, who grew up in Perham, said he worked on the road for weeks.

“It’s amazing seeing how this community comes together,” he said.

Once you’re at the Angle resorts, the bombers are the main conduit.

Our second fishing session delivered us to a house over a drop-off next to a shallower point, among a few other fish houses, and Palmquist mentioned that some tip-ups were set up nearby.

That day the fishing was steady, with fish in a slightly better mood than the day before, most of them biting a red glow jig tipped with a minnow.

The last morning of fishing, we were dropped off at “the crack house” so named because it sat on the edge of a notable crack in the ice near O’Dell Island, another quiet Sunset outpost with a pod of fish houses and an outhouse and lots of walleyes around.

“It’s the only one we haven’t moved this season,” said Palmquist, and that was for good reason, as we found out.

In a couple of hours, we caught more than a few dozen fish before one last bomber trip back to the resort and the long ride home.