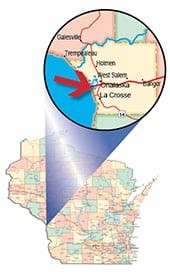 Local fishermen familiar with La Crosse County’s sprawling Lake Onalaska believe that lake will eventually become a yellow perch destination with a reputation that may eventually exceed that of Devils Lake in North Dakota.

It might seem as though that type of fishery would be beyond Onalaska’s reach, but don’t suggest that to Chad Knapmiller, owner of Schafer’s River Rentals in La Crosse. Knapmiller is just one of many local Mississippi River fishermen who have watched the big river’s yellow perch fishery explode in numbers and size over the past few years.

Onalaska basically makes up most of the Mississippi’s Pool 7 and is connected to the main channel. Any perch that live in the main river can also make their way into Onalaska and, in fact, have done just that. Lake Onalaska’s perch fishery has improved right along with that of the Mississippi River, according to Knapmiller, who was looking at about 16 inches of ice on the big lake as of Thursday, Feb.11.

“A lot of people come here to fish for perch and those perch are now all up and down the river here. The Mississippi already has become a destination perch fishery,” said Knapmiller. “As good as that fishery has become, I think it is still trending upward for perch. Big schools of perch come into Onalaska from the main channel. If you can get in front of one of those schools, you can do really well.”

And not just in numbers, but for size, as well. Knapmiller said it’s not uncommon to find perch that can stretch the tape measure beyond 12 inches.

Right now, though, an extended bout of below zero overnight lows and single-digit daytime highs has kept anglers – and even the fish – hunkered down.

“The bite has been slow throughout the cold spell, with northern pike and bass providing the best bite lately over the panfish. But, I do expect the fish to start popping once weather warms up again.”

When that happens, anglers will find plenty of room to roam. Acreage calculations for Lake Onalaska vary from 7,100 acres to 9,400 acres depending on where someone considers the lake’s boundaries to be, but either way that’s a lot of water. The lake averages about 6 feet of depth, but does hit roughly 25 feet at its maximum.

The local Wisconsin DNR fisheries team surveys Onalaska regularly, with the most recent survey occurring this past September using electro-fishing equipment to determine the health of the fishery. A total of 2,707 fish were collected with 43 species represented, proving yet again that the Mississippi River supports one of the most diverse fisheries in the state.

The DNR crew ran similar sampling efforts in 2008, 2012, and 2016. Since then, average largemouth bass, yellow perch and pumpkinseed sizes have all increased (0.6 to 2.0 inches). Compared to other 24 other Mississippi River locations from pools 4 through 11 (includes 57 surveys), Lake Onalaska largemouth bass and bluegills were smaller than the other sites.

Lake Onalaska also had a below average relative population abundance of  game fish species. Abundance of combined bluegills, crappies, largemouth bass, northern pike, rock bass, sauger, smallmouth bass, walleyes, pumpkinseeds, and yellow perch was 10.9 per hour. Bluegill (1.8 per hour) ranked in the lower tier of other similar surveys which averaged 39.5 per hour. Yellow perch (4.7) ranked in the lower tier. The average of these 39 other surveys was 7.1 per hour. The catch rate for largemouth bass (1.3) was also below average (8.7).

Body condition (how plump a fish is) were excellent for bluegills and largemouth bass. These were about 10% above normal. Yellow perch body condition was good.

For anglers returning to Onalaska after the cold snap, Knapmiller said they shouldn’t be surprised if they bump into some big northern pike.

Walleyes, though, can be a tough slog on Onalaska in the winter because the best winter walleye fishing is usually found near current.

“And then you’re playing with fire when it comes to ice fishing. You don’t want to be near current. Wait until you can launch boats to fish for walleyes,” he said.