Home » Newsletter » Avoid the thin ice that can get ya

Avoid the thin ice that can get ya 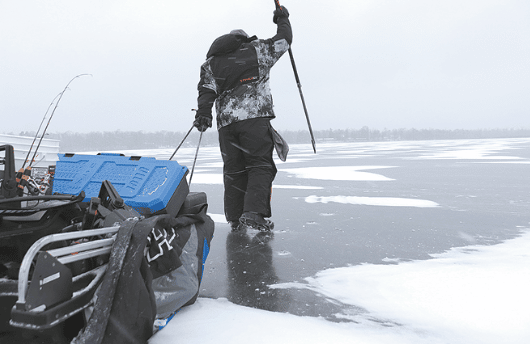 2020’s strangeness has carried over into lake ice development

I’ve been fortunate to get on the ice this fishing season a whole bunch of times, but it’s not been the kind of ice year for which we’d all hoped.

Depending on what part of the ice belt you’re fishing, you could be sitting in a wheelhouse or you could be watching open water. It’s been that kind of year. Portions of northern Minnesota and Wisconsin have seen some great, all-black ice that’s incredibly durable stuff. However, warmups have been frequent until now.

Thus, there are variable ice conditions no matter where you travel – 6 inches of great ice on one lake while the lake next door is 75% open water with eroding shoreline ice every time the wind blows.

I’ve hit about a dozen or so different lakes throughout Minnesota and Wisconsin this season through December, and almost all of them have had open-water portions. Some have had large, wide-open spots, and others have had small spring holes, or pockets of weeds that ducks and geese were keeping open.

Conventional thinking on thin-ice danger is a stereotypical first-ice scenario, when someone wanders onto a pond or lake with 1 to 2 inches of ice. Said angler doesn’t check the ice thickness, ignores some cracking, and plunges to his or her peril through ice that was far too thin to begin with. After doing this a long while – and going through the ice myself a few times and observing more scary situations than I’d ever hope to – I’m here to say that anglers wandering onto thin ice is actually a rarity.

Ice danger is heightened more frequently during a season like this one, with 6 inches here and inconsistent ice there. Shoreline ice can be great, even passable by ATV and eventually a truck … but then, weak-ice spots that are scattered throughout the lake take gear, vehicles, and sometimes lives. Confidence in the ice thickness is achieved by seeing others on the lake. But without knowing the path they took to get to safe ice, mistakes are made.

On bigger lakes, you can have bigger problems, especially if ice formation takes weeks rather than days. You’ve got shifting ice sheets, cracks that swell and spew water during big temperature swings, and the preponderance of wind-blown trap-door ice around those cracks – the kind where you step on one end of a seemingly-attached ice chunk and fall below the water line as the whole chunk rolls over the top of you.

Later in the ice-fishing season, it’s the drifts on the leeward side of big ice heaves you need to watch out for, as they collect snow while insulating the ice, creating slush pockets and/or thinner ice than the surrounding area. Certainly, any active crack requires some spudding and drilling to figure out.

Smaller lakes have danger spots, too, and they’re not always predictable from year to year.

This season, I was on a solid 6 inches of ice on a metro-area lake I frequent, and people were everywhere. An ATV rider had even taken a small hard-house past our group and to the other end of the lake.

Upon further inspection of some suspect ice in the distance, I found an ATV-sized spring where air bubbles came from bottom right up to open water. This angler missed the hole by 50 yards or so without ever seeing it, and there were two other spring holes directly adjacent to the larger one.

Certainly, moving-water areas need to be crossed with caution. That means reservoirs with a channel and dam that allow flow, but also small natural lakes with inlets and outlets. Warm spells see those areas become more active as some light melting occurs and currents erode the underside of the ice without an angler being able to see the effect. Any neck-down areas between two lakes can create current as well, so hug the shoreline side of these until ice is well-developed.

Shallow weedbeds in the center of the lake have been particularly problematic this year, because ducks and geese frequent them for food, keeping them open at night when nighttime lows usually cap them over.

Snow cover now has helped to show anglers those areas that are open, but it can also cover 1 to 2 inches of previously “readable” ice that has just frozen.

The bottom line is to be careful when you’re out there, even on foot. After watching a buddy walk right into an open-water crack pre-dawn, I’m a bigger fan of waiting for some daylight these days.

Every angler should own a few items related to ice safety, and these will hardly slow you down. First and foremost, you should have a good, heavy spud bar. Swing heavy and make sure no water comes up into your fresh chippings, let alone the spud go straight through.

Get a throw-rope to attach to your person, your sled, or eventually your ATV. Ice picks are an easy necklace to wear for a few more weeks, so you might as well throw those in while you’re prepping your gear. These days, too, it’s easy to own a float suit.

Last, use the buddy system. Ice has been more unpredictable this year than I’ve seen it in some time, so it’s best to have a capable friend along with you should the unthinkable happen. The cold is coming. But for now, patience and some caution will go a long way this year.