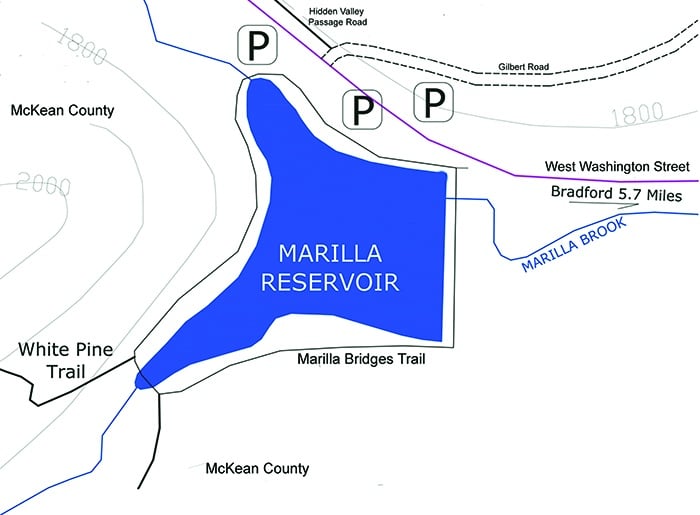 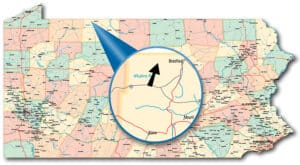 It seems a bit of a tease, at first.

An outsider traveling through McKean County looking for a place to cast a line might first cast a lusty eye upon Heffner Reservoir. Built in 1956, it’s the primary water source operated by the Bradford City Water Authority.

More importantly for sportsmen, it’s off limits to fishing and boating, among other things. Always has been.

But all is not lost.

There’s some good angling to be had, too.

Reservoir No. 3, or Marilla Reservoir, is 40 acres in size and, like most high-altitude lakes in the region, it’s relatively infertile, all things considered.

But it’s a winter fishing destination nonetheless because the Pennsylvania Fish & Boat Commission stocks it with trout – a mix of brooks, browns and rainbows in past years – with ice fishermen in mind.

Instead, the commission said only that the fish were released sometime the week of Dec. 7-12.

Still, the fish went in and are there for anglers, before and after ice forms.

They are not the only species present in the lake, though. The commission did its first-ever survey of Reservoir No. 3 in 2018 and found a surprisingly nice bass population, of two kinds.

Largemouth bass predominate; smallmouth bass are much rarer. The survey found 17 of the former for every one of the latter.

But the smallmouths tend to be larger on average. The biggest largemouth biologists handled topped out at 16 inches. The biggest smallmouth, by comparison, stretched 21.

Just keep in mind what kind of bass you want to catch when deciding where to fish. Reservoir No. 3’s largemouth bass are most commonly caught in the weedy coves on the lake’s northern and southern shores.

Its smallmouths tend to hang out along the steeper, rip rap areas on the north shore, as well as along the dam breast.

Panfish – bluegills, pumpkinseeds and to a lesser extent yellow perch – round out the lake’s sport fish population. The bluegills and pumpkinseeds are especially abundant. That’s the good news.

The bad is that all of the lake’s panfish tend to be small, a problem that may persist for a while because of some invasive competition.

In doing their survey, biologists also found white perch, a species not native to the region – they’re supposed to be swimming in the Delaware River watershed – but known to outcompete panfish when given the chance.

No one knows how they got in the lake. Commission biologists say they didn’t release them, and theorize that some else did, intentionally or otherwise.

But anglers can get after the lake’s fish of all kinds easier than before. A partial drawdown of the lake in fall of 2017 allowed for construction of a new ADA-compliant, accessible fishing pier and a new canoe launch.

Similar enhancements were made at the same time to Reservoir No. 2, or Gilbert Reservoir. That waterway offers, it’s hoped, a fishery on the rise.

At the same time, the pier and canoe launch were being built at Gilbert Reservoir, the Fish & Boat Commission stocked it with largemouth bass and forage fish. A year later, in 2018, they did the same, adding bluegills to the mix. The year 2019 brought more largemouth and bluegill stockings.

How are those fish faring?

That’s something the commission was hoping to find out this year. A survey of the lake was planned for 2020.

There’s been no word yet on if that got done – COVID limitations impacted a lot of planned field work statewide – or what results it might have yielded, if it was accomplished.

In the meantime, all fishing at the lake is catch and release only. That’s intended to allow all of those fish stocked to develop into self-sustaining populations that can handle angler pressure and harvest.

LOCATION: West of Bradford on Route 346.

WHAT YOU SHOULD KNOW: Marilla Reservoir is a winter fishing destination because the Pennsylvania Fish & Boat Commission stocks it with trout – a mix of brooks, browns and rainbows in past years.