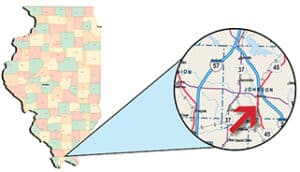 While the lake at Ferne Clyffe State Park attracts a number of anglers for the spring trout program, the scenic southern Illinois site tends to be more popular with hunters and wildlife watchers.

Located on Illinois Route 37, just one mile south of Goreville and 12 miles south of Marion, the 2,430-acre park is easily accessible from both I-57 and I-24. Camping and hiking are also popular at the site, and hunters and anglers typically camp at the park to take advantage of its natural setting.

DNR’s most recent survey of the lake show that the overall fishery is healthy.

Rainbow trout are stocked in Ferne Clyffe Lake in spring and fall to coincide with seasons – the fall season opened Oct. 17 this year.

As for the lake’s other fish, here’s some of DNR’s notes:

• Largemouth bass were collected at a rate of 42 per hour of electrofishing in spring 2019 – a substantial decrease from 2018 that’s likely linked to very clear water during the sample –  and only 6% were larger than 12 inches. Condition of fish was poorer than the management plan goal.

Most Ferne Clyffe bass range from 9 to 13 inches in size, but it is not unusual for one or more trophy-sized bass to show up in the spring electrofishing sample. Although fish up to the 10-pound mark have been collected in years past, large fish were observed but not collected during the 2019 sample.

• Bluegill abundance was lower – 34 were collected per hour, and 90% of these fish were larger than 6 inches. Forty percent of bluegill were larger than 8 inches, and no bluegill exceeded 9 inches in length. Bluegill body condition was good.

• Channel catfish had a relatively good sample, with 28 channel catfish per hour collected, ranging in size from 16 t0 20 inches.

• Crappies are rarely represented in the annual electrofishing sample. In 2019 no crappie were sampled.

• Redear sunfish are usually less abundant than bluegill in Ferne Clyffe Lake, and the most recent sample followed this trend. Redear were collected at a rate of 8 per hour of electrofishing (a third of the rate in 2018), 25% were larger than 8 inches in length. No redear were sampled over 10 inches, and overall body condition of all fish was very good.

Small in size, the 16-acre Ferne Clyffe Lake has a maximum depth of 22 feet, is open to bank fishing, but boating and swimming are not allowed.

As for the state park, its history is quite interesting. George Rogers Clark and his contingent are reported to have passed through or near Ferne Clyffe on their trip to Fort Kaskaskia in 1778. One hundred years later, the Cherokee are reported to have used the area as their hunting range while on their Trail of Tears march.

Two Cairo brothers purchased a part of the park known today as Hawks’ Cave/Big Rocky Hollow in 1899 and called it Ferne Clyffe because of the ferns that grew in such abundance. The area soon became known for its beauty and was eventually sold to Miss Emma Rebman, a local school teacher and Johnson County school superintendent. Miss Rebman opened the park to the public on Sundays for a 10-cent admission. Ferne Clyffe soon became a popular attraction, and local entrepreneurs began to provide transportation from the Goreville train depot for an additional 10 cents.

In 1929, Miss Rebman offered to sell the park to the State of Illinois.

Additional efforts by conservation and political groups such as the Greater Egypt Association and the Illinois Redevelopment Board resulted in the state’s purchase of Miss Rebman’s 140 acres in 1949.

Impressive rock formations can be seen from almost all of the park trails, but two of the best-known sights are Hawks’ Cave, a 150-foot-long shelter bluff, and a 100-foot-tall intermittent waterfall on the Big Rocky Hollow trail.