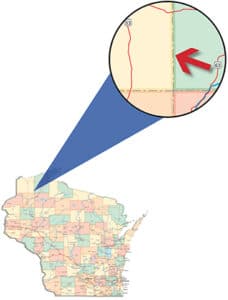 Bayfield County’s Middle Eau Claire Lake was last surveyed in 2013 and showed an adult walleye (15 inches or longer or “sexable fish” if shorter) population estimate of 2.6 adults per acre. That’s not a terrible number, but it is a 49% decline from the average abundance of 5.1 adults per acre from 1991 to 2007.

That 2.6 adults per acre is also a tad below the average of 3.0 adult walleyes per acre found on other lakes in Bayfield and Douglas counties that are sustained through natural recruitment.

The walleye size structure has changed significantly between survey periods and has increased as abundance has declined.

Bluegill relative abundance in 2013 increased by 69% since 2004; however, average length and growth of bluegills has decreased – likely due to higher abundance of bluegills.

At that time, local DNR fish biologists considered a more conservative walleye regulation to keep more walleyes in Middle Eau Claire – and continuing their natural reproduction efforts – until the cause of the drop in walleye numbers would be pinpointed. Angler exploitation wasn’t necessarily the issue at that time. The local DNR crew also suggested more liberal largemouth bass regulations to encourage more harvest in that direction, with the thinking being that increased largemouth numbers could be cutting into the walleye population in some way.

Today, Middle Eau Claire has a walleye/sauger regulation that allows a daily bag of three fish, but fish from 14 to 18 inches may not be kept. Only one fish longer than 18 inches is allowed per day.

Walleye stocking was not suggested at that time because Middle Eau Claire was still showing adequate natural reproduction. Stocking wouldn’t be considered unless fall electrofishing surveys showed fewer than 10 young-of-the-year walleyes per mile of shoreline for three consecutive years.

Middle Eau Claire Lake does have a reputation for producing good sized smallmouth bass, so the local fisheries team wanted to protect that fishery while encouraging harvest of largemouth bass.

The lake also has a reputation for producing quality muskies (38 to 44 inches), even if the population might have been considered a little below the northern Wisconsin average for density at the time of the survey. The largest muskellunge caught during the 2013 fyke netting survey was 42.8 inches.

When it comes to northern pike, Middle Eau Claire differs from a number of Wisconsin lakes that are overrun with small pike. In several survey years the fisheries team was not able to net enough pike to make a population estimate, other than to say that the pike population has appeared to be low during all survey years. Interestingly enough, though,  the largest northern pike caught during the 2013 fyke netting survey went 40 inches.

Rock bass were the second most abundant panfish species, but their 2013 numbers decreased a bit from previous surveys. The mean length of rock bass was 7.4 inches in 2013. Warmouth and pumpkinseeds followed in abundance, then black crappies and yellow perch. Crappies averaged 10 inches; the perch averaged only 4.7 inches.