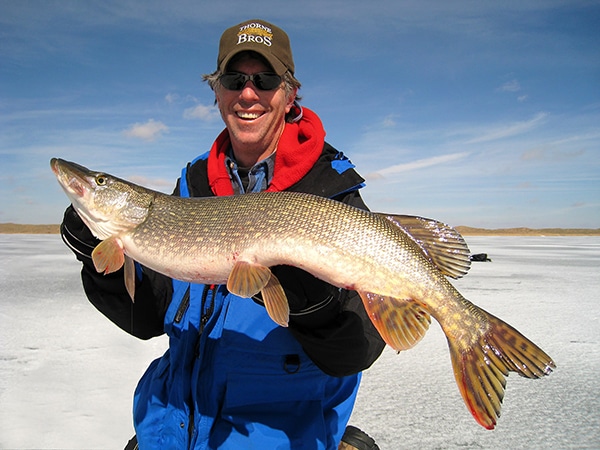 It was one of those early December days when, really, the only goal was to set foot on the ice, drill a few holes to make sure the auger hadn’t conked out over the summer, and be sure that everything was in order for a trip north shortly after the calendar turned.

We’d chosen a small bay of a larger lake because it offered the easiest access and it had been frozen for some time, given it was relatively shallow and protected from the elements that can delay ice formation.

It took time and a little sweet talk to rouse the auger from its slumber, and as the business end slipped around inside the newly forming hole, it was evident a blade-sharpening had to be added to the to-do list. But soon we had a few holes drilled, ice scooped from them, and saw the greenish tint of the water and weeds below. This had been a spur-of-the-moment deal, so the reels bore the same line we’d used last year and the same small jigs – one still adorned with a now-crunchy piece of yellow corn – were tied from the ends.

We hadn’t brought along any bait, so I selected one of the heavier-duty rods from my small arsenal and tied on a small spoon that flutters and darts and catches fish whether baited or not. The first fish of the ice-fishing season entered the hole not five minutes later, an ornery little northern pike that would have been prime for pickling had I been up to the task. But I wasn’t, so I slipped the fish back down the hole and sent my spoon down again shortly thereafter.

It wasn’t long before another fish hit and, again, it was evident this was no crappie or sunfish. It was another pike, several inches bigger than the first and in some regards a wake-up call about the opportunities below our feet.

“If you scan social media in the days after it’s safe to go on the ice, it’s pretty common to see guys posing with their crappies or walleyes,” said Mark Tuchscherer, an ice-fishing enthusiast from the west metro area with a year-round soft spot for Esox lucius. “But people who neglect early-ice pike are missing out on some of the best – and I’d say easiest, in some regards – fishing of the year.”

The beauty of early-ice pike fishing is there aren’t many secret locations and it’s among the best times of the year to land a true monster. Special regulations on some lakes have improved fishing for quality pike, and the state’s relatively new pike zones are aimed at increasing the size structure of northern pike on a broader scale.

Whether you’re after a trophy pike or a few smaller fish for the pickling jar or frying pan, the prime place to begin the search is a large weedbed that still has some green, oxygen-producing weeds within it. Vast weedbeds that abut deep water are best in that they afford fish plenty of forage and enough space to spread out.

And these sorts of weedbeds, which often grow in sheltered bays, are pretty easy to find by looking at a map or doing some pre-ice-fishing scouting. It’s common for big pike in many lakes to spend the summer in deep and cool water where they’re not readily accessible to anglers, but as the water temperature drops in the fall, they head back to the weedbeds and feed voraciously.

“Green weeds really are the key to consistently locating pike during the early-ice period,” Tuchscherer said. “In lakes with strong pike populations, you’d be amazed how many fish you can catch from a single weedbed. And the beauty of it is that you generally can go back year after year and have success in the same area.”

Notice he didn’t say spot? Northern pike tend to roam around in search of food during the early-ice period. While high-percentage spots such as points and turns in a weed edge provide good ambush opportunities and therefore hold pike, this is the time of year for an aggressive, mobile approach. Even if you believe a spot should be good, don’t sit there for hours on end if you’re not getting bit.

Tuchscherer keeps his presentations fairly simple for early ice pike, prioritizing covering water over spending time trying to dial-in various lures or colors. A tip-up with a lively minnow on the hook is always in one hold. He’ll use sucker minnows if he has to, but given the option, he’ll go with a large shiner every time.

When the fish are active or he’s on lakes such as Upper Red or Lake of the Woods where he knows big pike are around, he’ll fish with minnows up to 8 inches or more. When the fish aren’t aggressive, or he doesn’t expect to hook a big one, Tuchscherer will use smaller minnows. (During really tough bites, he’ll even hook on a fathead.)

He uses either a spinning or baitcasting reel for his other setup, vertically jigging a spoon or jig tipped with a minnow.

“Early ice for pike means shallow water, which is nice because with an aggressive jigging motion I can pop that spoon or jig way up off the bottom and then let it fall back through the water column,” Tuchscherer said. “You might generate some strikes as the lure is racing upward, but it’s most common to get bit when it’s falling back to the bottom like a dying minnow.”

While northern pike may never get the respect they deserve, they’re among the most willing of participants in the early-ice game. And catching them doesn’t take a high level of skill or super-specialized techniques, so an early-ice trip for northern pike is a great choice for anglers who want to get kids or other newcomers interested in ice fishing.

“The opportunities really are endless,” Tuchscherer said. “We’ve got so many great pike waters throughout Minnesota that you probably won’t have to look very hard to find a lake where you can pretty consistently go out and catch a few early ice pike.”