Home » Newsletter » How to grip an ice rod

How to grip an ice rod 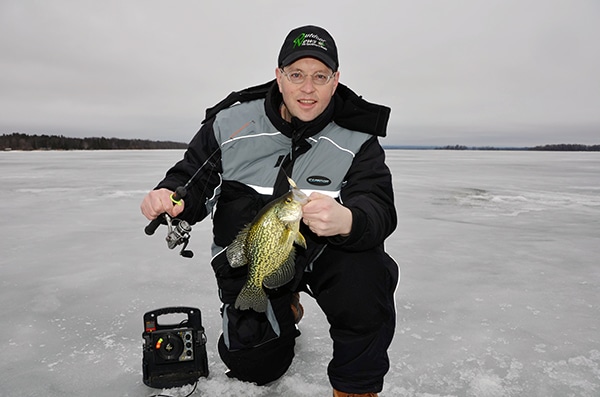 It’s probably nuts to suggest that there’s an improper way to pick up a jiggle stick and catch fish, but I’ll stop short of that by saying there are some methods better than others. Far be it from me to tell another person how to grip his favorite ice-fishing rod, but over the years, I’ve found it’s these details that can really translate to additional fish. I’ll cover a few of them based on rod and reel type, but also explain advantages of one over another.

This comes into play with the rod-end mounted fly or round multi-plier reels.

When I’m using this type of rod and reel, as a righty, my right hand cups the right side of the reel in a form of pistol-gripping. It was a grip of necessity back when I fished more horse-hair, light-poundage line on the much better drag systems offered in those little fly reels. To keep the arbor from spinning, you needed to palm the reel on hookset while feathering back to allow slip if you were into something big.

The hookset here is a twist-and-lift scenario, where you open and extend your hand while lifting your arm.

It’s a quick set once practiced, and I really prefer it anytime a round arbor reel like this is involved. I don’t prefer this grip with a spinning reel, as unlike with the round reels, your fingers will be in the way.

If you clutch the back of the spinning reel seat between thumb and fore-finger, you may be a pistol-gripper. For anglers who sight-fish or otherwise really lean over the hole, closer to their electronics, the “pistol” is a great means of jigging and hook-setting. Anglers I know who favor this method feel like they have better control of the bait while holding it like they do a pen or pencil. For them, it translates into finer jigging strokes and ultimate detail work, especially for finicky panfish.

If your head is leaning forward over the ice hole, then the pistol also aids your hook-setting ability.

Rather than raising your entire arm when it’s already near your ear, you save wear and tear on the top of your shelter (and rod blanks) by simply flicking your wrist like pointing to the sky. If you’re a leaner or studier of the graph, this is probably the best grip for you.

Of course it’s not the greatest for reeling, especially if you have long fingers or fat hands. Big digits get in the way of bringing fish top-side, and at least for this guy, it’s proved cumbersome in fighting especially large fish. That said, I know some incredible guides and other ice enthusiasts who only grip an ice rod this way. They’ve outfished me in this manner as many times or more than I’ve outfished them.

Back when you really had to look to find ice rods with any sensitivity, a finger on the blank was your secret weapon. Whether paired with a high-end custom rod, or whatever you inherited from your grandpa’s five-gallon bucket of gear, a finger-up offered both better feel and even better jigging strokes.

Today, this is the method I prefer about 80% of the time when not either sight-fishing or using a round reel. In my mind, it offers comfort and control while giving you the best flexibility in a fight with big fish.

It’s more natural for many people to grip an ice rod this way, but perhaps not with a forefinger up on the blank. For that reason, the custom ice rods of today that allow you to tape your own reel wherever you’d like are key to the system. I tape mine mostly forward, giving me the ability to keep the pad of my pointer finger on the blank.

Normal jigging is unaffected, but subtle finger taps on the blank, as well as squeezes to the rod handle itself, allow you to impart some serious subtlety. If you’ve never done it, try getting into the habit of putting a finger on the blank and see if it doesn’t translate to better bite detection. Why let the vibration travel through cork when you can get it direct from the blank and make a decision that much faster?

No matter which method you utilize, put some thought into how you go about the business of jigging, bite detection, and hookset. It might feel wholly unnatural at first but could make all the difference when the bite is really off.