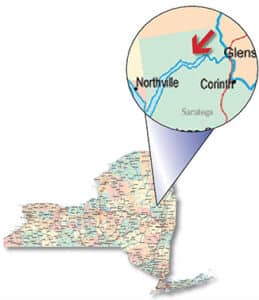 Native Americans once called it “Land of the Waving Grass.” And before it became New York’s biggest man-made lake in 1930, its river-bottom-land was the sporting grounds for the likes of Ira Gray (Adirondack Ike), the former forest ranger, hunter, trapper, angler, and author who hailed from the region.

The Great Sacandaga Lake is a reservoir, and was once called that. It also holds the state record for northern pike, a 46-pound, 2-ounce monster caught by Peter Dubuc in 1940, a decade after several communities and farmlands were submerged to help control flooding on the Hudson River.

The GSL is as big of a fishery today as it is a body of water, enjoyed immensely for recreational purposes. While the southern and more open part of the lake and its northwestern bay may see a lot of fishing action, don’t overlook the more river-like narrow stretch: about 14 miles between the Batchellerville Bridge and Conklingville Dam.

To top if off, there is the Stewart’s Bridge Reservoir between the Conklingville Dam and Stewart’s Dam that is popular year-round as both bodies of water are open to ice fishing.

GSL is a multi-species fishery with healthy walleye, northern pike, and smallmouth bass populations. It is also stocked with rainbow trout by the New York State Department of Environmental Conservation. According to DEC Region 5 fisheries biologies Chris Powers, nearly 12,000 trout are stocked annually.

DEC’s website reports that in May of this year, over 9,000 rainbows between 8 and 9 inches in size were stocked near Day. That’s good news for anglers in this part of the lake, which – because of its deeper water near the Conklingville Dam – attracts both walleyes and trout.

“That deep hole might be a good spot for walleyes in late summer,” Powers said. “I suspect there might be some anoxic conditions in that deep water, so the rainbow trout likely aren’t holding on the bottom; they’re likely suspended somewhere where the oxygen starts to get depleted.”

Powers said anglers should consider focusing on the lake’s numerous tributaries, fishing on shore where there is access, but also for boaters around the mouths of these tribs.

“There’s quite a few tributaries that would bring walleyes in during the spring, and cold water refuge for trout in the summer as well,” Powers said. “I wouldn’t be surprised if there’s some pike hanging around those areas. With some nutrients coming into the lake, that starts the whole food chain that feeds the little fish and then the big fish show up looking for lunch.”

Along with walleyes and big northerns, the Sacandaga is also turning into a respectable smallmouth bass fishery. Powers said “we are hoping to do some bass surveys in the relatively near future, probably in a five-year plan because the smallmouth fishery is really taking off, and we want to get a handle on it.”

A bonus for GSL anglers might be the Stewart’s Bridge Reservoir (Stewarts’ Pond) about a 3-mile stretch of water. A day use area on the west shoreline has limited launching facilities that are more accommodating to small boat anglers.

“That section is a similar species assemblage as to what you’d find in the (main) reservoir; walleyes, pike and bass,” Powers said of Stewarts Pond. “It’s pretty deep, and a little colder there because it’s a tailwater of the dam.”

Both the main lake and the smaller reservoir attract ice anglers, but Powers said anglers should be careful on Stewart’s Pond “because there’s current through there, the dams are pretty close, so it can be a dangerous spot. People do ice fish in the bays, there’s a couple that are secluded that lock up pretty good. But it’s not going to be as good of ice as the main lake.”

Overall, Powers feels GSL is a fine year-round fishery, including the upper section.

“It’s pretty good walleye fishing for 15-, 16-, 17-inch fish, just over the legal size,” Powers said. “Good numbers of them, but not a lot of 22- or 24-inchers. For the rest of the lake we hear reports of good pike, particularly through the ice.”

DEC operates four boat launches on the lake. This section includes the Town of Day Boat Launch site on North Shore Road in Saratoga County that can accommodate 40 cars and trailers. There is limited access at the day use recreation area at the Stewart’s Bridge Reservoir in Hadley.

This section of the GSL is located in northwestern Saratoga County near the towns of Day, Corinth, and Hadley. The Day boat launch is on North Shore Road (County Route 4) in West Day.