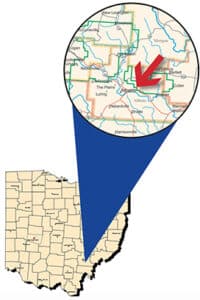 Athens, Ohio — Just a few miles outside of Athens in southeastern Ohio, a thin ribbon of water meanders through Strouds Run State Park.

The two-mile long Dow Lake is only 153 acres and less than 300 yards wide at its most expansive point. It’s smallish stature, however, makes it easily accessible for almost any point on the lake. For angling prospects, that’s a good thing. It’s nothing that’s going to break any records, but there’s a fair number of fish at Dow to whet the appetite.

One of the largest draws at Dow is the channel catfish bite, which is supplemented every two years by DNR Division of Wildlife stockings of about 25 fish per acre each time. Channel catfish typically run in the 8- to 12-inch range when stocked.

Catfish are well distributed throughout the lake, and the stocking efforts have resulted in the representation of several year-classes of good size fish.

The Division of Wildlife since 1988 has tried to build a quality bass fishery at Dow Lake through a protected slot that prohibits keeping bass between 12 and 15 inches.

“The most recent electrofishing survey was conducted in 2016 and shows high numbers of slow growing bass,” said Mike Greenlee, fish management supervisor for the Division of Wildlife in Athens. “A little over 10% of the fish sampled during the survey were over 15 inches, compared to the 2010 survey, which had a little over 25% over 15 inches.”

Those numbers can be a little deceiving, said fisheries biologist Matt Hangsleben, because there were some good year classes of bass in the past few years, so there are lots of small fish out there but there are still good numbers of larger fish (the Division of Wildlife caught 17 fish over 18 inches in the last survey).

“We had planned to survey Dow this past spring but were not able to due to COVID-19 restrictions,” Hangsleben said.

The bass slot on Dow was put in place in hopes that anglers will harvest some of the smaller bass, thin them out, and get the population’s growth kicked into gear.

Rainbow trout are stocked each spring, and the angling pressure for the species is the hottest thing going until water temperatures warm up. There’s typically a fishing derby associated with the release. The trout tend to hole up in the deep water near the dam, which is where most of the pressure will be.

The lake is stocked each spring with trout from 10 to 13 inches in length.

Panfish numbers are decent at Dow. There are a lot of small bluegills and redear sunfish, most of which will measure at about six inches. The Division of Wildlife in 2000 placed 60 brush piles in Dow Lake and felled 20 trees a year later for use as fish attractor structure and habitat. A big brush pile is located right off the east side boat ramp, which would likely give up a fair number of panfish. The piles are marked on the lake map, a detailed version of which is available through the District 4 office.

Hangsleben said the crappie population is good, and fishing prospects are high for them right now.

“Based on our survey from 2019, the crappie numbers are high at this lake with most fish between 8 and 9 inches,” he said. “We sunk fish attractors in Dow in 2016 and I know from personal experience that the crappie are loaded on our fish attractors right now. If an angler can find out which structure site the crappies are active on it can be some very fast action.”

New to Dow in recent years is saugeyes, which were stocked for the first time several years ago. The project is still in its experimental stages.

“Up until  2015 another nearby lake, Lake Snowden, was being stocked (with saugeyes), but survival was very poor at that lake,” Greenlee said. “Saugeye stockings were stopped at Snowden and shifted to Dow Lake in hopes that they would do better at Dow and provide another opportunity for saugeye fishing in the Athens area. Saugeye fingerlings have been stocked at the lake since 2016 and we hope this lake will perform better than Snowden and provide a local lake with good fishing for saugeyes.”

Hangsleben said the division is starting to hear of anglers catching saugeyes now, which is a good sign.

A wooded trail that is part of Strouds Run State Park winds around the lake, providing abundant access points for shore angling. The trail passes through pine groves and hardwoods and can provide a cool retreat on hot summer days. If you’re feeling particularly energetic, the trail leads all the way to the city of Athens. The east side of the lake offers one boat ramp, a beach, and scattered picnic areas. There is a 10-horsepower limit for boats and there’s a small boat rental near the ramp.

“The lake has very good shore access in the north end by the boat ramp and down by the dam,” Hangsleben said. “There is also a trail that goes all the way around the lake right at the shoreline so every part of the lake can be fished from shore. All the fish attractor sites can be fished from shore depending on how far someone wants to walk but there are two that are within easy walking distance from a parking area. One site is located in the corner of the dam and the other is located just down lake from the dead-end gravel road by the pavilion.”

Dow Lake can be accessed from the State Route 550 exit off U.S. 33. From State Route 550, turn left on North Lancaster Road. After crossing U.S. 33, turn right on Strouds Run Road, which will lead to the park.