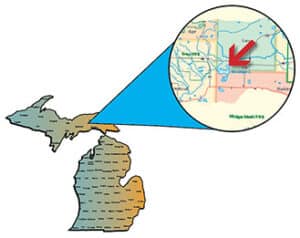 With sparse aquatic vegetation limiting fish habitat, the fishery on Luce County’s Big Manistique Lake – also called Round Lake – often needs a helping hand. Regular plants of walleyes have provided an additional fishery and aided in cropping off some of the abundant panfish, too.

North Manistique Lake is located in southwest Luce County about 15 miles southwest of Newberry. At 1,709 acres it’s smaller than neighboring Big Manistique (10,130 acres) and South Manistique (4,000 acres) but with a maximum depth of 50 feet it is the deepest of the three. About half of the lake is 15 feet or less and most of the drop-offs are gradual, with the exception of those along the south shore.

The lake is fed by several springs on the north and east shores and a small unnamed creek on the west shore. Helmer Creek flows out of the southeast corner of the lake and into Big Manistique Lake.

In 1978, local anglers built a couple spawning reefs. Although they never produced any successful spawning activity they do provide habitat and still hold fish today. One is located on the west side of the lake, about halfway down the shoreline and just south of the unnamed creek. The other is in the northeast corner. Both are located in five to 10 feet of water and both hold walleyes and perch. There are also dozens of fish cribs scattered throughout the shallow areas that provide habitat for fish.

North Manistique has a deep history of fishery management dating back to the 1920s. Stocking efforts, by both state and federal fisheries agencies over the years, have included northern pike, yellow perch, rainbow trout, lake trout, brown trout, smallmouth bass, muskies, and walleye.

Between 1997 and 1999 the focus was on lake trout, but that effort didn’t pan out so only walleyes and muskies have been stocked since 2003. Walleyes are stocked in odd numbered years and muskies on even years.

The state has planted 6,202 muskies in North Manistique since 2012.

The most recent DNR survey of the lake turned up 6,330 fish including 13 species. The survey found very good numbers of perch and rock bass, fair numbers of walleyes and cisco, and light numbers of smallmouth bass, pumpkinseed sunfish and northern pike.

The walleyes averaged 17.8 inches and ranged up to 24.

“Four year old walleye in North Manistique Lake were growing approximately 1.4 inches above state average,” Bauman wrote. “Additionally, two fish captured exceeded 10 years of age, which may suggest that mortality in this population is low, which is expected for walleye. Age analysis indicated that year classes were produced in years when fish were not stocked (2000, 2006, and 2012) which is similar to previous surveys, which showed that some natural recruitment is occurring.”

Smallies captured in the survey ranged up to 17 inches, northern pike to 35, perch to 12, and pumpkinseed sunfish to 8. Rock bass ranged up to 11 inches.

No muskies were collected in recent surveys and there have been no angler reports of muskies being caught.

“Muskellunge will be stocked in an effort to provide additional angling opportunities…” Bauman wrote. “If no muskellunge are captured during future survey efforts by 2025, no further attempts to introduce muskellunge shall be made.”

Jigs tipped with a minnow, leech or nightcrawler will usually attract walleyes. Anglers also toll crawler harnesses along any weedbeds they can find in 10 feet of water or more. The reefs are good spots to fish, too.

For perch try dropping a minnow down in 14 to 18 feet of water just outside the reef on the west shore. Anther spot worth checking out is in the same depths in front of the boat ramp in the southeast corner of the lake. For rock bass drag a nightcrawler along the bottom in 8 to 12 foot depths.

The lone public access site on North Manistique Lake is at the Luce County Park off CR 417. It features a hard-surfaced ramp and parking for about 14 vehicles.

To remain relevant, there is a growing consensus that NAMWC needs to adapt. Effective management in the 21st Century will

Upcoming outdoor events from across Michigan.