When ICAST started, Orlando, Fla., dawned humid and hot, as it usually does the second week of July. However, it was different this year, as the world’s largest fishing tackle trade show was a no-show, at least in Orlando.

This year, for the first time since this business extravaganza began in 1957, trade folks didn’t meet because of the pandemic. Instead, the American Sportfishing Association’s show was held virtually for companies offering their latest tackle and related products.

The tackle industry made the most of the change. And here’s a look at hot, new gear that fishermen might see at their local retailers in the coming months. 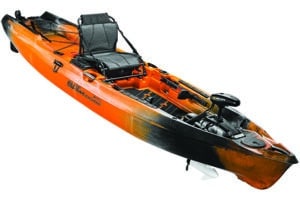 An innovative watercraft from Johnson Outdoors, the Old Town Sportsman Autopilot, was selected from the 30 Best of Category winners to take home the ICAST Best of Show award. The product also took top honors in the Boats and Watercraft category. For a complete list of 2020 Best in Show winners for all 30 categories, visit outdoornews.com

Rapala is emphasizing colors. The favorite Down Deep Husky Jerk has five additional walleye-approved colors, such as Dreamsicle and Black Wonderbread. The DT series of crankbaits also has five additional colors, including Big Shad and Rootbeer Crawdad. The colors are available in all models, but the DT-20 only comes in the three new shad patterns. Rapala adds a heavy-duty lithium fillet knife to its accessory category as well as a universal line-counter that will work even with spinning reels. Storm has a shad-shape body for the 360GT swimbait series. The new body has a thumping tail action and a slight body shimmy. VMC’s new Crossover system maximizes efficiency for rigging soft plastics and worms on VMC hooks to catch big bass. The system comprises patent-pending crossover rings, which feature a dual-channel hood for easy Neko or Wacky rigging, and pliers specially designed to quickly insert soft-plastic worms into the rings. rapala.com 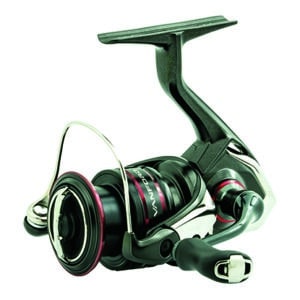 Shimano’s Vanford spinning reel is built with the C14+ body for lightweight strength and rigidity. It’s available in seven sizes to handle ice-fishing or ultralight chores to the 5000 size for stripers, tuna and other heavyweights. The light body weight and MagnumLite rotor make the reel more sensitive and perfect for finesse applications. Zodias bass rods were completely redesigned with the C14 reel seat and hollow Monocoque grips to transmit the lightest vibrations. The rod series is built on lightweight High Power X blanks with torsional rigidity to prevent blank twisting. The popular Symetre spinning reel has been matched with high-quality graphite rods in combos. There are 14 models. www.shimano.com

Bagley recently became part of the Northland Tackle family, so its introductions are a little scant this year. However, the Flat Balsa B is a substantial, shallow-running, balsa-bodied bait. Designed to dive to 3 feet, it has the weight to be cast a mile and the size to be impressive. Also, this year, the Pro Sunny B Twin Spin has dual front and rear props. It dives to 6 feet. www.bagleybait.com

Abu Garcia’s offerings include four reel series based on the industry standard round reel – notably the C3 6500 size; the Catfish Special also comes in a 7000 size. The Zata series has low-profile casting and spinning models and is available in combos. On the rod side of things, the Virtual series of Bluetooth-connected rods announced last year is now scheduled to be available in mid-August. The series includes both spinning and casting models that link with an app to Apple and Android phones. For more info: www.abugarcia.com

Daiwa adds a 300-size Tatula baitcaster for big baits and bigger fish as well as the Tatula CT with its emphasis on light weight. The spinning reel category adds four series if you include the redesign of the BG series. It features the MQ one-piece frame, a feature shared by the new Kage reel series. Procyon AL (for aluminum body) and the Laguna LT, a spinning reel with a carbon body complete the offerings. On the rod side, there are two swimbait rods each in the Tatula and DX series, a set of side-drifting rods in the North Coast salmon and steelhead line as well as Prorex muskie rods. Several travel rods and combos are new. www.daiwa.com

Eagle Claw teamed with Yum to create Ultimate Tackle kits for terminal tackle, bass tackle and trout. Of course, there are new styles of hooks from Eagle Claw – spinnerbait hooks in both Lazer Sharp and Trokar lines, all with the Pro-V bend. Finally, the all-new baitcasting combo is part of the EC2.5 family of rods. Visit: www.eagleclaw.com

G.Loomis’ IMX Pro series of rods – currently 74 models – adds 10 technique-specific models for bass. The rod series “takes advantage of ongoing improvements in designs and materials,” according to planning manager David Brinkerhoff. The 10 bass models include three extra-fast swimbait rods, one designed for micro-swimbaits on ball jig heads (are you listening walleye guys?) and a rod for bladed jigs. gloomis.com

Northland Fishing Tackle extends its line of jigs with the addition of the Dee-Vee series. The deep-vee head design falls fast and straight. The jigs have 3D eyes and a wire bait keeper that helps retain soft plastics and live bait. It’s available in 1⁄16 to 3⁄8 ounces in 12 colors. The Dee-Vee Bucktail jig is available in the same sizes and in 12 versions. It’s dressed with bucktail. The Rippin’ Minnow has a rip-jig head that darts and glides. It is rigged with a plastic body in four sizes and 12 colors. For more info: www.northlandtackle.com

Lew’s primary thrust this year is baitcasting reels. There are six new series, ranging from the Custom Lite SLP to the Superduty GX3. The popular Tournament Pro LFS now has a left-hand 7.5 retrieve ratio model. There are three new series of spinning reels and two mini spincast reels for the younger or less-experienced set. Introduced this year are five rod series, one of which is the Inshore series – some of which models are great crossover rods. There are new models in the Pro TI, Custom Plus Supergrip and Black Speed Stick series. Lew’s also offers a series of reel-care lubricants and tackle bags. www.lews.com 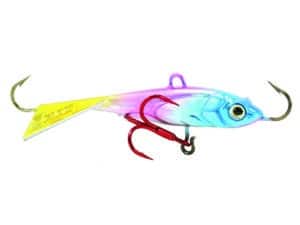 Designed specifically for a vertical presentation, the new Tikka Mino from Clam Pro Tackle is a balanced jigging minnow for ice anglers. Effective for open water, too, the Tikka Mino swims and darts like a panicked baitfish, and has prism holographic colors that attract predators. Comes in 14 colors and four sizes. clamoutdoors.com 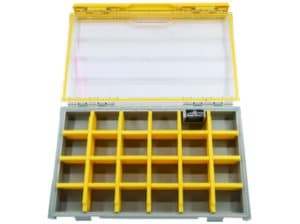 Plano Molding Company’s 2020 introductions include a major expansion of the soft-bag line and the Edge series of utility boxes. The soft bags include the Weekend Speed Bags. The series comes in the popular 3500, 3600 and 3700 sizes with stowaway boxes included. Also, the Softsider and Tackle Bag series both combine the utility of a soft bag with utility boxes. The Edge series continues to fill the utility niche with boxes, and the Edge Flex series lets the angler design the compartments. Visit planomolding.com.

Berkley adds FluorShield, a co-polymer line infused with fluorocarbon, combining the suppleness and castability of the former with near invisibility. It’s available in 4- through 30-pound test. The Hit Stick is a minnow bait that works as a jerkbait for bass and a trolling lure for walleyes. It has more side flash and rolling action than other Berkley hard baits. The Frittside Biggun and Jr. models are new in the 5-size, bracketing the Frittside bait introduced last year. The Power Pop is a soft, top-water popper with the flotation of a solid bait. On the soft plastic side, there are two series of frogs and a pair of double hooks with bait keeper designed to work with them. berkley-fishing.com

Strike King’s 2021 emphasis is on hardbaits. The Hybrid Hunter and its smaller version, the Jr., are versatile, shallow-water baits with a large thump and larger presence. They act as substitutes for a rattle bait, jerkbait and squarebill. The KVD 1.5 Hard Knock is a square bill that has enhanced rattle that makes more noise while giving the bait extra hunting action. The KVD jerkbait series needed a smaller version, and the KVD 100 is the answer. While the profile is of larger jerkbaits, it has a unique lip shape, giving it “ridiculous action,” according to Kevin VanDam. Adding to its Ned Rig lineup, there is a weedless Tour Grade Ned jig head and a Rage Ned craw with claws that feature the Rage claw sized to match the body. strikeking.com

Al’s Goldfish saw the need and is bringing out a Lil’ 49er. This 1⁄4-ounce spoon has all the flash of its bigger Forty-Niner brothers and the same action, but its smaller size should be a hit under the ice as well as in open water. Also, the Sebago Trolling Rig is a build-your-own length as each section can be added to another to create a blade string as long as you wish. www.alsgoldfish.com

Tactacam’s Fish-I is a small, tube-shaped video camera that makes recording the action easy. It’s waterproof (to 30 feet) and records on a micro-SD card. tactacam.com

Millennium’s new rod holder mounts to existing rails, whether they are on a pontoon boat, bass boat or deep-vee fish-and-skis. The holder is designed to provide precise and secure locking angles. Built of anodized aluminum, the holders have rubber-coated contact points keep rods safe from abrasion. millenniummarine.com