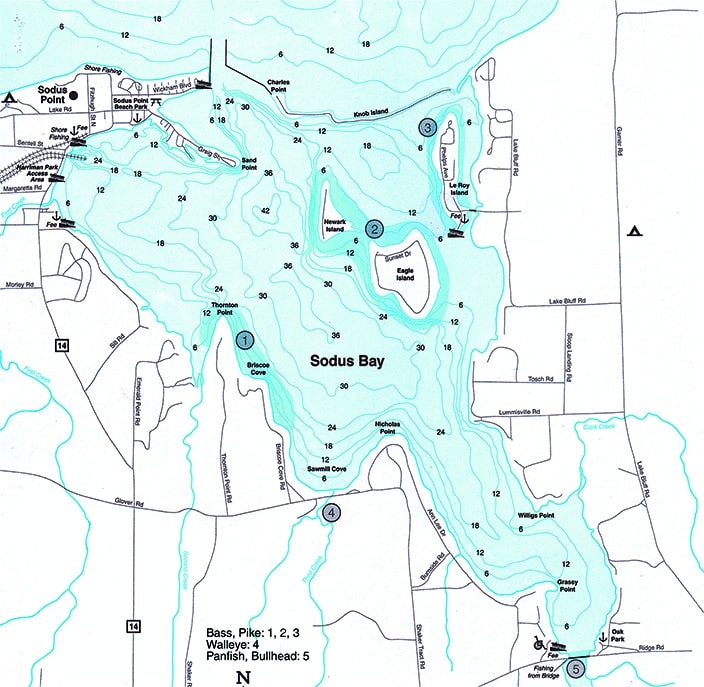 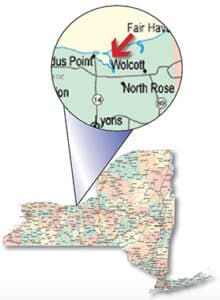 It’s always exciting to fish anywhere on or near Lake Ontario. Sodus Bay, in Wayne County, gives anglers a plethora of options throughout the year. Those options include not only several game fish species to pursue, but a number of ways to go about it.

A recreational paradise, the region can accommodate trailered boats at two public launch sites: one that is operated by the Village of Sodus Point on state Route 14 and Margaretta Road, and another open during the summer months adjacent to the U.S. Coast Guard Auxiliary facility at Sodus Point.

If that’s not enough, the bay beckons to car-top boats as well such as canoe and kayak paddlers. And, the pedestrian friendly Bay Bridge, near the bay’s south end, and just north of the Lake Shore Marshes, sees its share of anglers relaxing on the walkway with a line or two in the water.

So what are all of these anglers fishing for?

“The bass fishing is phenomenal,” Kenyon said of the warm-weather fishery. “Largemouths are everywhere. They’re under the docks, in the thick weedlines. There’s 5- and 6-pounders in here and plenty of smallies. They’re hitting wacky rigs with Senko worms.”

Kenyon said that Tim Andrus and his film crew from Rush Outdoors TV recently spent some time on the bay filming an upcoming episode and that they boated over 30 bass, both bronzebacks and bucketmouths.

But it’s not all about the bass as northern pike, panfish and bullheads are also spring and summer favorites in the bay. Kenyon says one of his fishing pals regularly targets bullheads at night off the Bay Bridge.

In early May, when the pike season opens, anglers head to the shallows around Le Roy and Newark islands targeting trophy northerns; where Lake Ontario regulations stipulate a 22-inch minimum creel length. Kenyon says the pike fishing becomes more difficult as the season progresses and the recreational boat traffic increases.

As for trout and salmon, the lake opens up just on the other side of Sodus Point welcoming such anglers. The Sodus Pro/Am tournament was just held July 16-18, with salmon, steelhead, brown trout and lake trout being the targeted species.

But Kenyon said at times the bay itself, including the main channel, is also a good spot to fish for steelhead and browns.

As for himself, Kenyon and his fishing buddies prefer to target panfish in the bay such as bluegills and black crappies. But his real passion is ice fishing.

“Ice fishing is unbelievable. I’ve counted 500-600 shanties on Sodus Bay and that’s not exaggerating,” Kenyon said. “Le Roy island is the earliest to freeze and that’s for pike. But the perch fishing is the big draw. The ice fishing capital, outside of Chaumont Bay, is Sodus Bay.”

Although generally shallow, at one time the New York State Department of Environmental Conservation took a shot at managing Sodus Bay as a walleye fishery.

It was stocked by DEC in the early 1990s with fingerling walleyes raised from fry, which was picked up in the later part of the decade by cooperating angler associations. Since 2003, there has been biannual stockings of fingerling walleyes.

DEC surveys assessments are that these fingerlings survive and grow to produce an adult walleye population, but Kenyon says they can be hard to come by.

“Walleyes are tough,” he said. “Over by the islands – and it’s almost a dusk or morning fishery – they are in there but there’s not a lot. They were stocked but they didn’t take so well.”

Well, you can’t have everything, but Sodus Bay still has a lot to offer anglers of all interests and skill levels. And for the traveling angler there’s plenty of campgrounds, B&Bs and motel units around to establish a base camp for a multi-day trip; typical of fishing Lake Ontario.

Sodus Bay is located on Lake Ontario in Wayne County, about halfway between Rochester and Syracuse. It is approximately 28 miles north of state Thruway Exit 41.