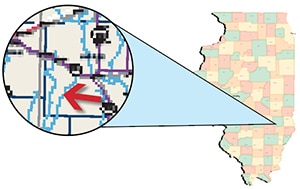 Newton Lake is changing and hasn’t produced one of its famous 10-pounders in a long time, but the 1,750-acre Jasper County cooling reservoir still ranks high among anglers.

The lake hosted the collegiate Big Ten Bass Championship in March 2007, and it has gained popularity among national bassers since.

Over the years, Newton has yielded at least three documented bass of 10 pounds or larger.

In 2019 tournaments, the largest bass recorded was 7.7 pounds – several bass over 6.5 pounds were caught.

DNR’s annual survey of the lake revealed a smaller number of larger bass, while other fish species appear to be doing well.

Following are summaries of the DNR survey report for the lake’s most popular species.

Largemouth bass: The size structure of the bass population in Newton Lake remained relatively stable over the last year.

In DNR’s most recent survey, the percentage of adult bass greater than the 18-inch minimum remained stable at 12% of the sample for the second straight year. The CPUE increased to 207 bass per hour, well above the target value.

“This lake continues to support a very good bass population,” DNR noted in its report. “However, the fishery is slowly beginning to show signs of change. Recent changes to regulations governing coal fired power plants have significantly reduced the amount of hot water discharged into the lake. This has resulted in a reduced growing season, and a shorter spawning season for prey species, especially gizzard shad. In short, it is transitioning from a cooling lake to an ambient lake.”

Bass recruitment in Newton continues to be high, body condition is good and growth rates remain at or above average.

“For 2020, Newton Lake will still provide very good angling opportunities,” DNR stated. “Anglers can expect to catch large numbers of fish from 15 to 20 inched in length ranging from 2 to 6 pounds. The majority of bass exceeding the 18-inch minimum will weigh between 3.5 to 7 pounds.”

Newton Lake bass feast on shad 12 months of the year, so anglers should make sure their tackle includes shad baits.

Channel catfish: Channel catfish numbers increased in DNR’s most recent survey and  body condition of the species improved compared the survey conducted in 2018.

“High natural reproduction and recruitment in Newton Lake have historically produced large numbers of channel catfish annually,” DNR noted. “More recently, the growth rate and size structure of the population has improved. Although still dominated by smaller fish, the population contains an adequate number of large fish to provide a good quality fishery.”

White bass: The white bass population has successfully recruited each year since they were first discovered in 1994.

According to DNR, with few exceptions, white bass numbers have remained relatively constant.

The electrofishing catch rate by DNR in 2019 increased and was above the historic average.

“The population continues to exhibit good growth rates and body condition,” DNR reported. “One large class of fish will contribute to most the fishery in 2020. Most of these fish will range from 10 to 13 inches, with larger fish up to 17 inches. Fish the main lake points or troll the flats to locate fish and then cast to schools.”

Crappies: Black crappie numbers continue to improve but remain low, according to DNR. Growth rates were good and body condition remained above target in the recent survey.

“In spite of the relatively low numbers, some anglers successfully target crappie each spring and consistently catch limits,” DNR noted. “The best crappie fishing is around tree tops and the docks in the warm arm.”

Bluegills: The bluegill population is in extremely poor condition.

“High summer temperatures [Newton Lake has very little thermal refuge] and a dense population of shad contribute to poor reproduction and slow growth,” DNR reported. “The majority of the bluegills collected were less than 6 inches in length and no bluegill over 7.5 inches were collected. This lake is not recommended for bluegill.”