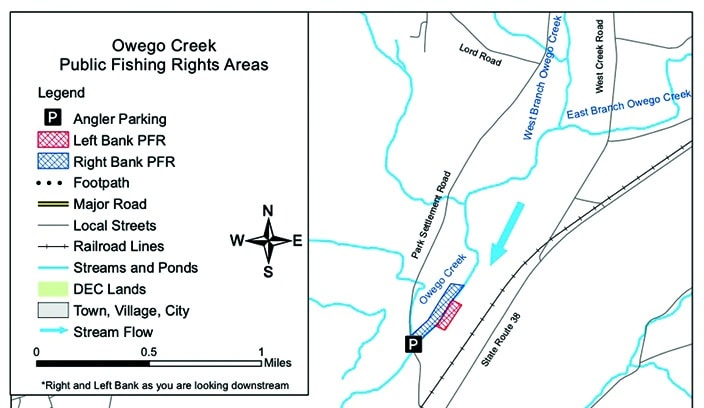 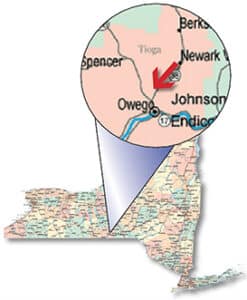 When it comes to creek fishing, it’s often all about access and New York’s Public Fishing Rights easements are something anglers should be grateful for.

Anglers in Tioga County, who fish both the East and West branches of Owego Creek, along with a section on the main creek, are likely appreciative of the PFR opportunities available along these streams.

The two branches merge and then flow into the Catatonk Creek, a tributary to the Susquehanna River.

The East and West branches provide most of the access. But there’s also the PFR that sits just a few miles north of the Village of Owego and below the confluence of the two branches.

Here, there is only .4 miles of PFR, which New York State Department of Environmental Conservation Region 7 fisheries manager Dave Lemon said sees most of its action during the earlier part of the fishing season. In fact, he said that about the entire fishery.

Lemon pointed out, however, that both branches see their fair share of stocking of brown trout – a number in the thousands – which summer and fall anglers should find appealing; conditions pending, of course, with concern for water temperatures.

This year, 14,300 brown trout were stocked between March and June at various locations along both branches and as well as the main creek. When combined with another 1,180 browns that are stocked in the Catatonk, that’s a total of 15,480 brown trout.

Starting with the main creek and moving north, the PFR is located on Park Settlement Road, just a few miles south of the confluence of the East and West branches. Most of the access is on the western streambank.

“There is a chance that anglers might catch smallmouth bass and other fish species that come up from the Susquehanna,” Lemon said when talking about this section, but also indicated they can be found further north.

With over six miles of PFR, the East Branch is likely the most popular. About 6,420 browns – including 340 2-year-olds – which Lemon said can be caught by anglers who head north. That’s where the PFR is, mostly along Route 38 near Richford and even further north into Cortland County. In most cases, the PFR can be found on both sides of the stream.

Richford is also home to PFR on the West Branch, which extends over to Tompkins County, north of Speedsville. The West Branch was stocked with 4,750 browns this spring, including 560 2-year-olds.

Lemon pointed out that both brown and brook trout reproduce in Owego Creek and that from time to time there are reports of anglers catching wild brook trout. This is also indicated in DEC’s literature, especially the PFR brochures for these streams.

Anglers may consider this an interesting point regarding DEC’s recent trout stream management proposals. Regardless of the fact that wild trout are present, Lemon said Owego Creek will be managed as a stocked fishery considering its history of such.

Owego Creek may also serve as an example of a stream that allows year-round trout fishing, which is one of the proposals in the trout stream management plan for some streams.

If you’re not familiar with Public Fishing Rights, they are permanent easements purchased by DEC from willing landowners, giving anglers the right to fish and walk along the bank (usually a 33-foot strip on one or both banks of the stream). They exist for the sole purpose of fishing. Some of these easements along Owego Creek are fairly recent acquisitions.

Again, Owego Creek sees most of its action in the spring, right after stocking. Considering that some of that stocking takes place in June, the stream could prove attractive during the summer months if conditions allow, and onward into the fall and winter for anglers who want to polish their fly-casting skills

Special regulations apply on both branches, as well as the main branch. From April 1 to Oct. 15, anglers can keep five trout, with no more than two being longer than 12 inches. There is no minimum length. A catch-and-release-only season runs from Oct. 16 through March 31 that allows the use of artificial lures only.

Owego Creek is located in Tioga County. From the Village of Owego, take state Route 38 north to Park Settlement Road to access the first of a number of Public Fishing Rights.