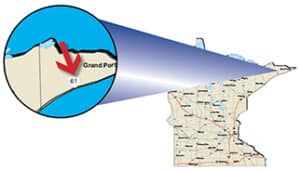 The fish community in Cook County’s Two Island Lake is pretty simple. It has a healthy walleye population, good-sized smallmouth bass, some northern pike, and the opportunity to catch a few bluegills.

So, while lacking a laundry list of fish species to catch, its non-fishing-related offerings, along with some darn good walleye- and bass-catching opportunities, make this 753-acre lake a popular destination.

“Most people who fish Two Island are targeting walleyes, but there’s a growing number of people going after smallmouths on it,” said Steve Persons, DNR fisheries supervisor in Grand Marais. “Because it’s close to town and has a good boat launch, there’s some fishing pressure driven to it.”

Walleyes haven’t been stocked in Two Island for many years, but they don’t have to be. The lake’s abundance of shallow rock, rubble, and gravel provide ideal habitat for its walleye population to reproduce and to thrive, naturally.

According to DNR survey reports, natural walleye reproduction has been consistent since 2009, with no apparent year-class failures and multiple strong year-classes present.

Anglers should expect to catch plenty of eating-size walleyes from Two Island. Persons says fish under 2 pounds are most common because it takes about four years for them to reach 13 inches in length.

“Two Island is one of the most consistent walleye lakes we have, and it does have a nice range of sizes,” he said. “But the typical walleyes (that) people will catch will be in that 1- to 11⁄2-pound range.”

The lake’s smallmouth bass population is booming, especially the size of the fish that Two Island kicks out. Excellent spawning habitat, an abundance of forage in the way of crayfish, and special regulations that have been in place since 1996 have provided an ideal situation for smallmouth bass to thrive in both size and numbers.

Currently, anglers are allowed to keep one smallie over 20 inches, but all fish from 14 to 20 inches must be released. The high release rate seems to be providing positive results.

“Overall numbers and the size of the smallmouths people are catching have been much better since the regulations were put in place,” said James Egan, of Buck’s Hardware in Grand Marais. “It’s a smallmouth factory, and they seem to be everywhere in the lake.”

Prior to the regulation, which was relaxed from a 12-inch maximum size in 2017, Two Island was full of relatively small bass. But the most recent DNR survey yielded smallmouths that averaged nearly 15 inches in length and an average weight over 2 pounds.

Persons added that there are definitely plenty of bass over 20 inches, and he’s confident that high numbers of fish over 14 inches should be expected from Two Island.

“Over half the fish you catch will easily be over 14 inches,” he said. “We just don’t see results like that very often.”

The west and east sides of Two Island have just enough vegetation for northern pike to establish a low to moderate population. While a larger pike is caught every so often, most are in the 2- to 3-pound class.

The lake also holds a few bluegills, which is quite rare in this part of the state. They aren’t overly abundant and they aren’t big, but their numbers have increased during the past 15 years.

“You can catch 6- to 8-inch bluegills to eat, and that’s unusual for this area,” Persons said.