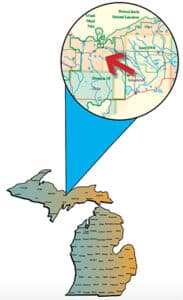 With all the changes to our daily lifestyles taking place due to the COVID-19 pandemic, some folks may just want to get away for a day of fishing and solitude. Schoolcraft County’s Grassy Lake may be “just what the doctor ordered.” With carry-in only access, the lake gets a limited amount of traffic and you won’t be bothered by water skiers and recreational boating.

Grassy is located in western Schoolcraft County in the Hiawatha National Forest, about 13 miles southeast of the town of Munising. It’s a 176-acre, aesthetically appealing, remote lake with a good population of warmwater species including muskies, pike, bass, and panfish.

Grassy Creek, often called Deer Creek by the locals, originates at Herman Lake and enters Grassy in the southeast corner. It exits the lake on the west shore and serves as a tributary to McKeever Lake, connecting the two water bodies.

Shoal areas in Grassy Lake consist of sand, marl, and pulpy peat. The lake has a maximum depth of 30 feet, an average depth of about 10 feet, and three miles of shoreline. Aquatic vegetation includes bulrush, potamogeton, and yellow pond lily.

Grassy Lake and the surrounding landscape provide remote recreational opportunities including fishing, hunting and camping. There is a small public island at the north end of the lake that has been known to be inhabited by bald eagles.

The only access to Grassy is an unimproved “carry-in” boat launch located in the southeast corner of the lake off USFS 2173 Road. This unimproved launch has a gradual slope, which may be challenging for anglers interested in launching boats larger than 14 feet in length.

Management of Grassy Lake began in the 1930s when bluegill and walleye were first stocked. Additional stockings of bluegill, walleye, largemouth and smallmouth bass, muskies, and northern pike have occurred over the years. No fish have been stocked since 1984.

The survey produced 32 muskies, averaging 35 inches and ranging up to 46. Eight year-classes were represented with signs of natural reproduction from non-stocking years.

“Muskellunge became a part of the Grassy Lake fish community in the late 1980s and are migrating during the early spring to and from McKeever Lake, which continues to be stocked,” Bauman wrote. “These spring migrations could be a source of natural reproduction, which occurs intermittently in either Grassy or McKeever lakes.”

Good numbers of northern pike also were collected in the survey. The northerns averaged 27.8 inches and ranged up to 36. Nearly 83 percent of the catch met or exceeded the minimum size limit of 24 inches.

There also were good numbers of largemouth bass to 18 inches along with some hybrid sunfish, pumpkinseed sunfish and rock bass.

Additionally, the survey captured a diversity of forage species not found in previous surveys including bluntnose minnow, golden shiner and common shiner.