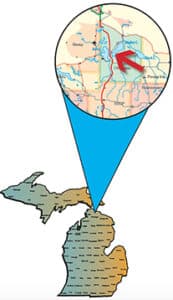 “The fish communities of Mullett Lake consist of both native and non-native species,” Tim Cwalinski, a senior fisheries biologist with the DNR, wrote in a report on the lake following a 2017 survey of the fishery. “Most attractive to anglers are the cool water fish species such as yellow perch, walleye, smallmouth bass and northern pike, and a coldwater species rainbow trout. Walleye and bass fishing tournaments are held frequently on Mullett Lake.”

Located in central Cheboygan County, about five miles south of the town of Cheboygan and east of I-75, Mullett Lake is part of an inland waterway of lakes and rivers, which includes Crooked, Pickerel, Douglas and Burt lakes as well as the Pigeon, Indian, Sturgeon and Cheboygan rivers.

The Indian and Pigeon rivers flow into Mullett Lake at the south end, along with several smaller streams that enter throughout the lake. The Cheboygan River drains Mullett at the north end and eventually flows into Lake Huron.

Mullett Lake is a relatively oval lake with several points, bays and sunken islands. It covers 16,702 acres of surface water – making it the fifth largest inland lake in the state – and has 34 miles of shoreline. The property around the lake is mostly developed with private homes.

Several invasive species have made a home in Mullett Lake including sea lamprey, round goby, zebra and quagga mussels, rusty crayfish, and Eurasian water milfoil.

Fisheries management on Mullett dates back to 1887 when the first survey of the fishery was conducted. Over the years, rock bass, yellow perch, largemouth bass, warmouth, northern pike, walleye, lake trout, splake, rainbow trout, brown trout, and lake sturgeon all have been stocked in Mullett Lake. In recent years, the stocking effort has focused on lake sturgeon, including stocking more than 3,300 since 2014.

Rock bass was the dominant species collected in the survey. They averaged 6.7 inches and ranged up to 11. Yellow perch also were very abundant, averaging 8.3 and ranging up to 13.

The survey produced good numbers of walleyes, smallmouth bass and northern pike. The walleyes averaged 14.7 and ranged up to 22.

“…During the spring gill-netting in 2017, we captured good numbers of age-2 walleye, which suggests we have multiple data sets that indicate strong year-classes of natural reproduction occurred in three years at Mullett Lake (2014-2016) following stocking events from 2010-2013,” Cwalinski wrote.

Smallies in the survey averaged 14.8 inches and ranged up to 21. Northerns averaged 24.7 and reached 36 inches.

“Smallmouth bass were also common in the survey catch. The average size of a fish caught was just short of 15 inches,” Cwalinski wrote. “Strong numbers of smallmouth bass 15 to 19 inches are available to anglers with fish up to 21 inches also present. Survey catches suggest this species may be more abundant today than in past decades, especially prior to the 1980s.

“Smallmouth bass reach legal size (14 inches or larger) in Mullett Lake at approximately age 4, which is relatively fast growth. Growth of this species is very fast in Mullett Lake, and likely attributed to the abundant forage of rusty crayfish and round goby. Age 2 to 6 bass were most abundant; however, we found 13 year-classes present with fish up to age 14.”

Normal fishing regulations apply for all species in Mullett Lake, with the exception of walleye. As of 2018, the daily creel limit is three fish, the minimum size limit is 15 inches, and the opening date or possession season is May 15.

Fall and spring are prime times for catching walleyes on Mullett Lake. They move into the shallower water and anglers use crankbaits and artificial minnows. Jigs tipped with minnows or leeches also produce good results.

Anglers also target the drops at Round Point and Needle Point on the east shore of the lake.

The smallmouth fishery heats up in the open water. In the early season, fish are still roaming the shallows and sight fishing is popular along the rocky shoreline and over the sunken islands at the north end of the lake. Crawler harnesses and tubebaits are deadly early in the season. As the water warms the fish move deeper and anglers switch to deep-running cranks.

DNR manages the Mullett Lake Village access site on the northwest shore, Aloha State Park on the northeast shore and Jewell Road access site on the east shore. All three feature paved ramps, ample parking and toilet facilities. Mullett Township maintains a small unimproved launch site with limited parking on the southwest shore near the town of Topinabee. There also are a number of road endings on Mullett Lake that provide public access especially for ice fishing.