Thief River Falls-based Conservation Officer Jeremy Woinarowicz reported that he responded to a call about a dead raptor on the side of a road, presumably struck by a vehicle.

The report came from the city limits of Oslo, Minn., in the Red River valley, about 30 miles north of Grand Forks, N.D., on Wednesday, April 1.

When retrieving the bird, an adult red-tailed hawk, the CO saw it had a leg band. In reporting the band to the U.S. Fish and Wildlife Service, Woinarowicz learned the bird had been banded in Saskatchewan, Canada, when it was a nestling in 1994.

“So 26 years. That’s really old,” Woinarowicz said. “The website where I was inputting the number asked me to double-check the band because it was such an old number.”

Given its location where it was found, Woinarowicz said it appeared the bird likely had struck a vehicle.

Birding experts in the Twin Cities clarified that the 26-year-old Red River redtail doesn’t mark a record for longevity, but the bird had a nice run nonetheless.

Lori Arent, assistant director at the University of Minnesota’s Raptor Center, said that in captivity, redtails have been survived more than 30 years, thought the average lifespan in the wild is much lower, like 13 to 20 years.

“This is exciting because this bird surpassed that by a considerable amount,” she said. 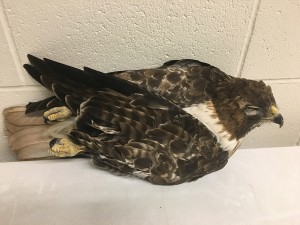 Arent wasn’t surprised the bird had fledged from Saskatchewan, which is only a couple hundred miles from northwest Minnesota’s Red River country. The bird could have set up its home base there years ago or perhaps it was migrating through the area.

“Typically the juveniles disperse and how far they go depends on whether they find an unoccupied area with suitable prey,” Arent said. “But not all redtails migrate, either. With a suitable prey base, they’ll stick around. I see redtails all winter, especially in urban areas.

The U of M Raptor Center, by the way, is down to essential staff and focused on keeping it medical clinic open during the worldwide COVID-19 health situation. No outreach programming is currently underway.

The body of the bird is in good shape, and the DNR would consider donating it to a museum, nature center, or school, if the agency can find someone who can mount it, Woinarowicz said.

“It is truly amazing that this bird lived in the wild for 26 years,” Woinarowicz said. “Pretty good for a bird chasing mice in a ditch.”