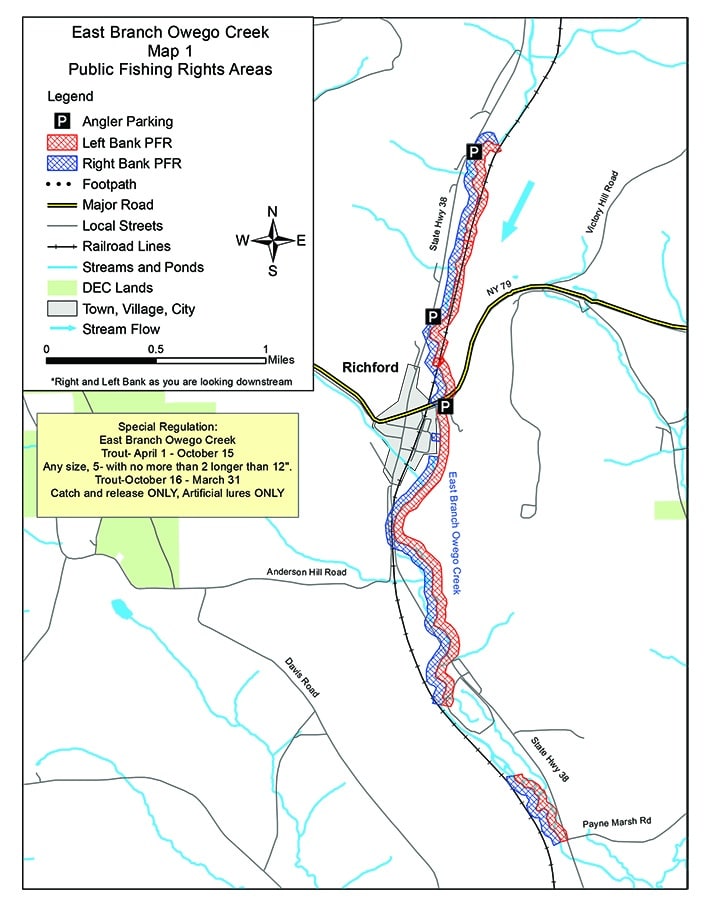 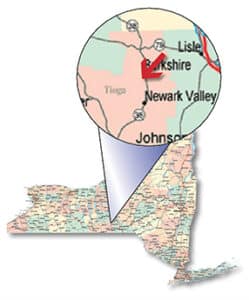 Owego Creek’s East Branch is one of those get-there-early waters, a stream that offers plenty of trout and lots of public access in the spring, but in a typical year sees its waters in some stretches warm to the point where trout survival is jeopardized and it’s best to give the fish a break at that point.

Located in Cortland and Tioga counties, the East Branch winds its way south for 27 miles to its confluence with the West Branch of Owego Creek – a fine stocked trout water in its own right – near Flemingville. Those two branches then merge to form Owego Creek, which also sees DEC trout stockings every spring and attracts plenty of angling attention from the April 1 trout opener into early June.

DEC has secured 5.3 miles of Public Fishing Rights along the banks of the East Branch, with three official parking areas and a few unofficial (and perhaps technically illegal) pull-offs that have evolved over the years.

Veteran outdoor writer Mike Kelly, in his guide book “Trout Streams of Central New York,” rates the East Branch as a three-star trout fishery, with excellent dry fly-fishing and easy access. The best time to fish, he says, is that late May-early June period when the creek sees the popular Green Drake hatch.

Kelly says that like all streams, insect activity is largely dependent on the weather and “may vary considerably from one year to the next, but when the skies over the stream are calm and the bugs are frantic, it’s game on for serious fly-fishers.”

The East Branch offers some solid hatches, starting with the Hendricksons, which typically appear shortly after the April 1 opener and carry into mid-May. March Browns overlap the Hendrickson hatch, and caddis patterns – an Elk Hair Caddis or a Goddard Caddis – will usually bring up a fish or two. Nymph patterns are also very effective.

And chances are you’ll have plenty of trout to fish over. DEC annually stocks the East Branch of Owego Creek with about 6,600 yearling brown trout, as well as about 950 2-year-old browns of 12-15 inches. The creek holds a smattering of wild brook trout as well, in some areas more than others.

The most popular stretches of the creek are found from Richford downstream to Berkshire. Below Berkshire, the creek is more susceptible to warm water conditions that stress trout as summer arrives. Many fish will find their way upstream into cooler water or find springs that offer similar relief.

Not surprisingly, the creek sees its heaviest fishing pressure from the April 1 trout opener through the end of May. But the East Branch is essentially open to trout fishing all year, with an Oct. 16-March 31 catch-and-release, artificial lures only offering outside the regular trout season of April 1-Oct. 15. During the regular season the creek is managed under “5 and 2” regulations, with a daily limit of five fish, no more than two of which can be longer than 12 inches.

In addition to the trout, there’s always the possibility of encountering a smallmouth bass that has made its way upstream from the Susquehanna River and Owego Creek’s main stem.

It would be difficult to find a more accessible trout water than Owego Creek’s East Branch. The creek parallels Route 38 north of Owego (or south out of Dryden) all the way into its Cortland County stretch, with several access areas along the way. Route 79 in Richford offers another access point.

The East Branch was set to receive a solid planting of yearling browns in mid-March ahead of the season kickoff, as well as an April stocking of 2-year-old fish.